Singing with great finesse the Pinchgut Opera took Sydney by storm on opening night with their really quite wonderful production of The Chimney Sweep by Italian composer Antonio Salieri (1750 – 1825). The show was definitely ‘smooth not sleazy‘ and full of very special moments in music.

Fino fino sopra fino, Play it arftfully, Volpino, use your cunning and your brain, then there’s nothing you can’t gain

Superbly directed by Mark Gaal and supported by one of Australia’s finest group of musicians, the Orchestra of the Antipodes the very fine ensemble cast were outstanding.

Conducted by Australia’s musical genius Erin Helyard, they entertained and entranced as they acted out Salieri’s delightful romp.

They proved the art of finding Mr Right was all about deceiving and seducing everyone in sight while having fun and games of the very best kind, one in which murky undertones are only acceptable when love becomes a commodity. The action took place at a time when, if you were not wealthy and wanted to win the lady of your heart, you totally needed to resort to subterfuge if you desired a happy ending.

The cast were sophisticated, cool and ever so hot as they carried this wonderful comedic piece of fanciful fluff to that place where it required a high level of performance to succeed; the easier they made it look to the assembled audience, who were entirely plugging into all the action on stage emotionally, I knew the harder it was for them to not only perform but also to be so convincing. The refined detailing was indeed impressive.

Together with Nicholas Hiatt as Franzl, Troy Honeysett as Peter, Sabryna Te’o as Jakob, Gary Clementson as Hansel and David Hidden as Tomaso, plus a bevvy of apprentice chimney sweeps from the Sydney Children’s Choir, they won the audience over by delivering outstanding quality singing with fine comedic timing.

The audience had a great time. As rare as this piece is to find on anyone opera company of the world’s repertoire, so were the broad smiles, the happy mood and the buzzy atmosphere ensuring that merry comments came fast and furiously.

Everyone I encountered expressed the sheer joy and genuine delight at just being there to enjoy the whole experience. Pinchgut Opera’s The Chimney Sweep for this reviewer was a joy to behold. Also, I enjoyed myself immensely talking to all and sundry during intermission and after the show, gaining their impressions.

Congratulations to the Pinchgut Opera team – this was a brilliant effort of the highest calibre possible, one in which everyone on and off stage and the stunning cast and crew of their splendid production, including set, costume, lighting and sound technicians all needed to be rewarded with a shining star on the forehead.

We must not forget the awesome interpretation by conductor Erin Helyard of the score as he guided the simply amazing Orchestra of the Antipodes. 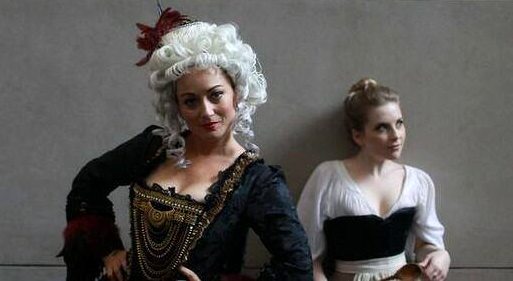 They wove their magic mightily playing the music of Antonio Salieri, the man whose reputation suffered so much at the hands of Mozart moviemakers.

With this great achievement Salieri comes right back into contention as not only a clever composer but also one who undoubtedly inspired his contemporary colleagues who are more well known today, as they also made beautiful music.

The power of one can be just that, inspirational and very definitely defining. Salieri may not have been the ‘brightest star’ in the court at Salzburg’s firmament but he certainly twinkled long and brightly. He produced delightful arias that are easy on the ear with their beautiful harmonies, sensational trills and punctuation marks that were well suited to the singspiel genre favoured by the King.

The translation from the German into contemporary ‘Australian’ style English also helped the action and antics on stage, as did the professionalism of the cast.

Soprano Janet Todd ensured everyone went completely to pieces as she seductively straddled a harpsichord in her ‘undergarments’, moving in time to the music.

Her arias too were delightfully subtle and sweetly sung with real warmth and feeling. Her Basta, Vincesti aria was outstanding.

Sensational soprano Amelia Faruggia, mastered all the trills and high notes Salieri demanded from his stars and it was not surprising with her delicious singing that she brought the house down.

Must say that I loved Christopher Saunders tenor voice. His diction too was wonderful and it was easy to understand why he excels in both operetta and opera.

He had a light touch that was very engaging. Being a graduate of the Guildhall School of Music and Drama in London he revealed his talents for acting as he pranced and minced about the stage looking dashing in a stylish black ensemble with a super waistcoat and buckled shoes.

He looked for all the world like it was a second skin, one he was incredibly comfortable wearing in his role as an ‘enlightened man’.

During the ‘age of enlightenment’ it seems men of wealth nearly always won the girl, not the man with the biggest heart, In our case he was the grit covered Chimney Sweep Volpino.

Stuart Haycock was grimily gallant and wonderfully self-assured in as he came in and out of the marvellous mouth of the fireplace whose design was inspired by a sculptural version of the ‘mouth of truth’ forming its entry,

The sculpture of La Bocca della Verità (mouth of truth) has a famous historic characteristic – it is a lie detector!

Originally a sculptural representation of the fearsome face of a pagan God from antiquity, who perhaps represented the ‘River Tiber’ in ancient Rome, it became famous thanks to Gregory Peck and Audrey Hepburn in the 1953 classic movie Roman Holiday. Soprano Alexandra Oomens in the role of Lisel, cook in the ‘Hawk household’ whom Volpino is in love with, was all delight.

A fourth year honours student at Sydney Conservatorium, this tiny pocket rocket with the really big voice showed off her very stylish moves both musically and as a budding actor.

How wonderful it will be to follow her career closely as she surges ahead.

David Woloszko with his big bass voice was a powerhouse in the role of Mr Bear and he like Mr Wolf, both ended up with the girls of their hearts while both learning how to be contrite. Franzl in his petticoats during rehearsal, courtesy Pinchgut Opera

All the action took place in either the parlour or the kitchen of a middle class family and their tradesman, with nary an aristocrat in sight, just those aspiring to be so.

Some have inherited their wealth while others have won it in a lottery. Their servants, mostly left to their own devices, endeavour to make their own luck by thinking up innovative strategies to relieve their masters of coin in their pockets.

This means a great deal of hilarity will be had by all as the original librettist was a doctor and man of science.

Leopold Auenbrugger’s story offers insights into the psychological and intellectual ideas of his time, as well as the foibles of the all too human characters we can easily identify with, recognising our own fears and frailties. The Chimney Sweep was another triumph for an opera company I do so admire. Cannot help but always feel so privileged, pleased and proud to be there.

In Pinchgut Opera’s The Chimney Sweep as promised Feathers did fly,  but when the dust settled I certainly felt the wonderful words the lovely Lisel sang

My heart feels oh so light
All cares have taken flight

Well based on the looks on the faces and all those I spoke too like me they experienced true delight and they showed their appreciation accordingly with great acclamation. It was all so very well done.

If you are a resident or visitor enjoy a stylish conversation about community social and cultural life at the Threads of History exhibition, City of Stonnington