Poldark Season 3, Episode 3, is another tale of rivalry, passion and power surrounding its central character Ross Poldark (Aidan Turner) who is filled with conviction as he takes leave of his wife Demelza (Eleanor Tomlinson). True to the novels by Winston Graham, Ross heroically goes about living more lives than anyone else could dream of having.

“I think I must go”, he said at the end of episode 2 as he left for France. He is trying to find and secure the release of his friend Dr Dwight Enys (Luke Norris), who was serving on a British ship, which has floundered off the coast of France. Demelza Poldark (Eleanor Tomlinson) down by the seashore with her son, in the television series, Poldark, courtesy BBC

Demelza and Jeremy her son, are standing on the cliff top wondering where Ross can be, as he’s been gone some time. They will be not happy to know he is arriving in a French market town where violence is an aspect of the way of life, and people are being beaten and attacked on the street by officers of the Republique.

Jack Farthing is taking his character of egomaniac George Warleggan, Ross Poldark’s nemesis to yet new heights of being dastardly and despicable in this episode. So much so he is putting many old Thespians in the shade.

Sworn in as a Justice of the Peace and a Magistrate of the court, his dreams of what he perceives as real power are at last being satisfied. As the French fight for ideas of liberty over the seas, George is enjoying spitefully taking it away from those he confronts in court at Truro. In this episode George and Elizabeth (Heida Reed) are becoming a formidable le force in society. When they arrive at Church, Demelza’s brothers Sam (Tom York) and Drake Carne (Harry Richardson) arrive with their own followers singing. They stand outside the fence looking in, because George has had them banned from stepping foot inside the church of England.

Showing defiance is not fashionable, especially where George Warleggan is involved, Sam and Drake don’t yet realise he is the one man guaranteed to retaliate cruelly if they cross him. Demelza, while down in the cove finds out the news from France and also learns of her brothers stand. She wants to help them have an influence locally, and shows them the dry abandoned meeting house Francis Poldark gifted to the village before he died, where they can hold their own church services.

Later her youngest brother Drake can be found down by the seashore waiting for Geoffrey Charles (Harry Marcus) to arrive with his governess Morwenna (Ellise Chappell) whom he is sweet on. When arriving home Elizabeth overhears Aunt Agatha (Caroline Blakiston) discussing their walk with them both and bans them from ever visiting the beach again, although they are not likely to comply. Demelza and Dwight’s wife Caroline (Gabriella Wilde) are sitting together in the parlour at Nampara where the four friends have spent some happier moments together.“How frustrating is a woman’s lot? they observe…”We are left idling at home while the men go off and fight battles.” They are discussing how to find out news of Dwight through Caroline’s aristocratic connections, which includes George, who tells her when she visits, he’s not on any list of survivors or prisoners he has seen. Imaging thinking that anything George might say would be comforting.

Over at Trenwith, the original Poldark estate, dastardly George is telling his Uncle Cary (Pip Torrens), he is planning to hunt a bigger prize; he wants to become a ‘burgess in the borough’… giving him an opportunity to court ‘public approval’ and perhaps even serve in the English House of Commons. During the 17th century a burgess in England also meant a man ‘able to provide his wife with beautiful and expensive clothes’. George Warleggan as Magistrate in Series 3 of the television series, Poldark, courtesy BBC

George tells the richly clad Elizabeth he’s leaving for his first appearance on the bench, which she refuses to attend. For his first case he excessively has twenty lashes delivered to an accused he finds guilty of a minor offence, his first horror.

Over in France Ross and Tholly Tregirls (Sean Gilder) are waiting to meet a contact in a tavern. He tells them about prisoners housed nearby who are all English, including survivors of a sea battle. He says names can be provided, but only at a price. Ross is reminded by Tholly for every hour they are there danger increases, and rebuffing the lusty wench behind the bar who it seems has taken a fancy to the dark eyed stranger, he does not help their chances of remaining undetected.

Back home Demelza is very distressed at not receiving any news and questions whether or not her husband on a fool’s errand. She would be more than alarmed if she knew Mme Guillotine is kept busy caressing the necks of the victims in the town where he is trying to remain circumspect.

Ross is in a perilous position, every new person in town is under suspicion. When he is taken in for questioning by authorities, he attempts to bribe the French official with 20 guineas. He counter demands, 50… and then tells Ross when he has it, he must leave on the next ship bound for England, or he will be executed. The brothers Carne, in the television series, Poldark, courtesy BBC

George hears the Methodists have taken possession of the village’s derelict meetinghouse, and appoints a special constable to guard his house and find out the names of those involved.

Demelza sends her brothers with local miner Zacky Martin (Tristan Sturrock) to back them up, to go and see Elizabeth at Trenwith and ask for her help.

She has no idea how hatred has become an obsession for Elizabeth.

They arrive to find George’s Constable guarding the door in his absence.

He lets Zac and Sam into the house where they plead with an unsympathetic Elizabeth, who only promises to speak to George and sends them away.

When George finds out about the visit he appraises Elizabeth about Sam being Demelza’s brother and accuses Ross of sending him, feeding her hatred. He makes her promise she will deny them the land and whips up her anger. George now finally sees his opportunity to persuade Elizabeth to take their child and to leave Trenwith and live in their townhouse in Truro, leaving her first son Geoffrey Charles in the care of her aunt and Morwenna.

She is eager to be out of Ross’s reach and agrees and they pack and leave immediately. George is feeling very satisfied that finally he’s won her completely over to his cause, although she’s yet to find out what that means.

“Now we can have some fun” says Aunt Agatha to Morwenna and Geoffrey Charles, she’s very glad to be free of the dreaded George. Over in France Ross and Tholly are on the British ship ready to depart, when Ross decides on the spur of the moment to give his friend his hat to take back to Demelza. He dives overboard and swims back to shore hoping to keep the arranged meeting and find out if Dwight is still alive.

Demelza is teaching Drake to read when Sam comes and tells her, they have been banned from the Meeting House. She realises George has found out they are her brothers and becomes thoughtful. 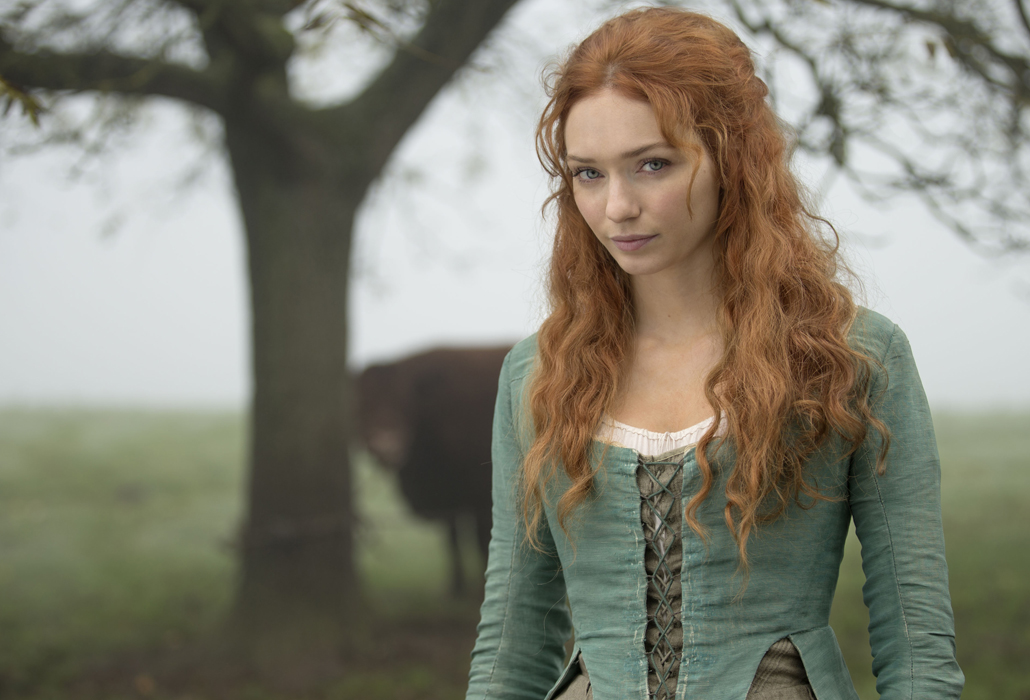 Tholly comes to give Demelza her husband’s hat and she’s mad at Ross for staying behind in France and endangering his life and she begins to question her wedding vows. So she makes a decision in his absence, giving her brothers the old grain storehouse at Nampara to make over as their church. They set to it with great zeal.

In France the barmaid at the tavern arrives with soldiers to challenge Ross, who while disguised wearing a Frenchman’s beanie, is still recognisable. He is forced to fight his way out of the tavern and the village, having grabbed the list of names he had requested from his informant In Truro George is receiving news from Lord Godolphin, an invitation to a banquet. He also hears his superior’s nephew is to come before the court on charge; he obviously wants his relative acquitted for assaulting a servant girl.

After hearing compelling evidence instead of committing Godolphin’s son he turns it around and commits the victim Polly Tregaskis to trial for committing perjury and lying about what happened. Elizabeth is shocked to her core, however without anyone around now to look to her well-being, she is in a perilous position. The Dr arrives and gives her what can surely only be laudanum to ease her nerves. This was the eighteenth and nineteenth centuries most addictive drug, short of smoking opium. Putting a few drops in your Sherry made it very easy to digest and so she begins to imbibe to help ‘calm the nerves and fortify the constitution’ just as her Doctor promised. My son and heir must be fussed over George tells his deal beloved when he comes home and finds her neglecting baby Valentine. Despite all the references to Valentine’s paternity in the first three episode so far, George still remains clueless, such is his attention given over to his being a tyrant of the first order. Poor Valentine now his mother has seemingly become addicted, the future looks quite bleak indeed. Ross finally arrives home and Demelza is overjoyed. He’s been given a list that includes Dwight’s name so they know he is alive, and hasten to let Caroline know. She collapses crying with relief at the welcome news. It means there is hope. Back home at Nampara Ross takes Demelza on when she tells him about her plans for the barn. He’s angry at first that she has done this without consulting him, but admits, he has no business questioning what she did in his absence.

She talks to him about taking charge when he’s not there… how did she know he was still alive at all. He sees her point, “ You’re my wife not my chattel…” he says. “I doubted I would come back alive, and now I have… “ well basically he tells her, he accepts her decision and they tenderly make up. Over in France at the end, we find Dwight Enys sporting a burgeoning beard. He’s working in a makeshift hospital, where he’s trying to help injured men without any medical supplies or even water. He comments to a young officer he is endeavouring to help, that they are all in hell now!