Cornwall, the wild coastline famous for its shipwrecks

Poldark: Series 3, Episode 4 based on the novels of Winston Graham, opens to reveal waves crashing violently on the rocks along the Cornish coast, which is rugged and handsome seen gradually through the mist.

People have gathered on one of its beaches trying to warm their hands in the cold, when the cry goes up – shipwreck! The Princess Charlotte carrying corn flounders and with crops failing and the local grain stores empty, the starving local people help themselves. Jack Farthing as George Warleggan, in Poldark Series 3, BBC One

Truro Magistrate George Warleggan (Jack Farthing) is relishing his position, sentencing scores of people to transportation. The tragedy feeds into his need to dominate, to have control and to punish those he considers inferior to himself. George has no empathy at all for the fact they are all starving. He is a man without conscience and used to getting his own way in all things.

Running into his enemy along the road, Ross Poldark (Aidan Turner) and George have words… mainly about Wheal Leisure a former Poldark mine George now owns. Aidan Turner as Ross Poldark in Poldark Series 3, BBC One

“How do you sleep at night George” Ross asks him? Demelza (Eleanor Tomlinson) is out digging potatoes when her baby starts to come and she calls Prudie (Beatie Edney) her housekeeper to help. Its coming fast and there is no time to send for Ross or the Doctor so later when Ross arrives home, he finds he now has a daughter too – Clowance.

Back home later with Elizabeth (Heida Reed), George finds baby Valentine fretfull. However his mother has been informed by her Dr it is just ‘wilfulness’ and so George does nothing and she sends it away with a maid to attend its needs. Motherly love has no place here. Elizabeth has more pressing matters. She is off to have tea with some of the local nobility, although not with the most ancient family George has been trying to court, the Godolphin’s. He’s off to a shareholder’s meeting for Wheal Leisure, without the ‘presence of Ross Poldark to amuse me’ he tells her, lamenting the days when he had Ross Poldark at his mercy.

Elizabeth is now so filled up with hatred; she has become rigid, cold and unreachable, totally hooked on laudanum. Demelza’s younger brother Drake Carne (Harry Richardson) brings a bevvy of live Toads for Geoffrey Charles (Harry Marcus) to play with to Trenwith. He also gives Primroses to his Nanny, Morwenna Chynoweth (Ellise Chappel). She knows she should not have allowed him into the house as his position in life socially is far beneath her own station, but she finds herself drawn to his innocent charm. Gabriella Wilde as Caroline Enys in Poldark Series 3, BBC One

Caroline Enys (Gabriella Wilde) has had a letter from the Admiralty saying the officers in France will be released… she’s been lulled into a condition of false hope, while over in France in his makeshift hospital without medications and water, Dr Dwight (Luke Norris) is using the back of a spoon dipped in a flame to cauterise wounds on the friend and soldier whose life he is trying to save.

Geoffrey Charles and Morwenna receive news they are to go to Truro for Xmas and just before Drake leaves she tells him she will never take the seashell bracelet he made for her off; it’s the most precious gift she has ever received. 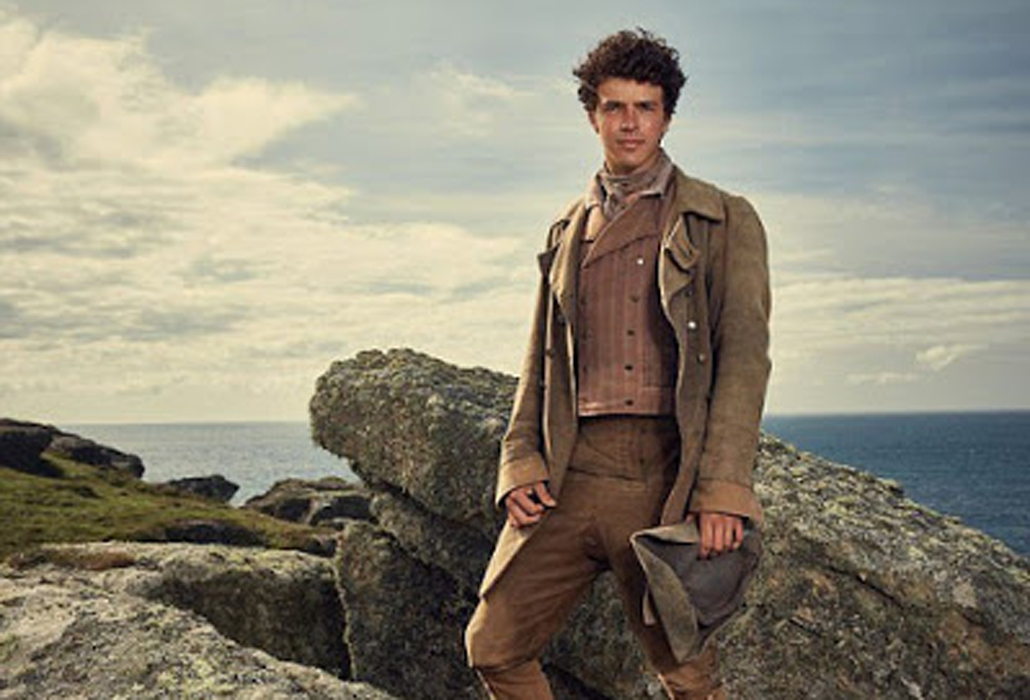 Geoffrey Charles gives Drake a practical gift, paper and pens to write to him while he is away. Arriving back at Nampara, Sam Carne (Tom York) tells his brother Drake off for going to Trenwith. He’s putting them all at risk.

Ross sends a letter to invite his Aunt Agatha (Caroline Blakiston) to his daughter’s christening. Prudie delivers the letter but George’s Constable screws it up and throws it away. Ross Poldark, Demelza and their baby being Christened, Poldark Series 3, BBC One

The Christening starts and Geoffrey Charles knowing it is on turns up of his own accord. After all, the baby is his cousin. Demelza later tells Morwenna she must ‘break the bond’ between her and her brother Drake… “George will never allow you to marry”, she says.

She tries to tell Drake the meetings between them both must stop, but neither are strong enough to resist the pull of their hearts. Later Ross and Demelza go to Trenwith to fetch Aunt Agatha to the christening feast and find her in a freezing cold house without fires in the middle of winter.

They also discover she also hadn’t received their invitation and Ross is furious at how she’s being treated and wants her to come to Nampara. However she refuses to leave the old Poldark home. In Truro Elizabeth is getting stuck into the laudanum… she infuses it into Sherry, which makes it far more palatable. She and George are holding an Xmas Eve ball and she’s ordered a new dress for Morwenna.

The noble guests they expect have not turned up and so slighted, when George overhears Morwenna and Geoffrey Charles innocently talking about the christening and of Ross and Demelza, which only increases his resolve to take revenge.

Elizabeth would be horrified to know George has decided to send Geoffrey Charles to Harrow. He informs Elizabeth they have been at the christening and she demands Morwenna is punished, little knowing George is already planning to marry her off. He has selected one of the minor Godolphin’s to suit his purpose, a Reverend Whitworth (Christian Brassington) who oozes villainy.

The Reverend has buried one wife and is no doubt a monster; or as George would later describe him, a reptile and a prig.

Ross is holding an Xmas day feast while over in France his best friend Dr Dwight Enys and the patients are eating grilled ‘rat’. Ross talking with Caroline on the way home comes up with a plan… to help feed the hungry. It requires them all to take part and Demelza and Caroline ensure they are dressed up to the nine’s, to beg for funds from the rich to help the poor during the worst winter for years, a new concept. Ross will have to purchase the goods offshore and land them down in the cove and so formulates a plan 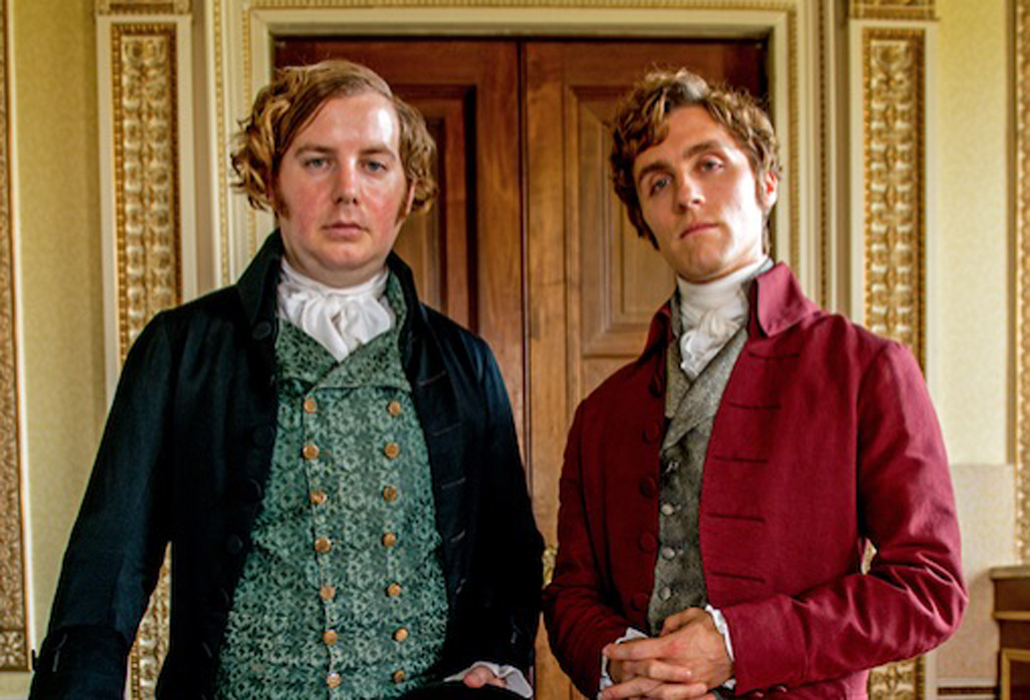 Meanwhile George is bargaining Morwenna’s future for 3,000 pounds with Reverend Witworth and Elizabeth on being told, is happy to inform her charge of the match… cruelly.

Morwenna asks her when she wed Francis was it not for love who retorts my current match is not founded on romance, but it is all the more successful.

Oh dear. Life is surely too short to be so unhappy.

Caroline sends a note to George having landed some of the biggest landowners and he’s more or less compelled to match their contribution to assist others with a donation of fifty guineas, topping the list of benefactors.

Ross and his friends gather in the cove to receive goods from a boat off shore… and take the goods to the meetinghouse, knowing George’s constable patrolling the woods is seeing them.

He rides off to Truro to tell his master who relishes planning to send them all to Botany Bay, he sends troops ahead and follows, after all he doesn’t want to miss the ‘fun’, ruining other people’s lives. The Reverend Whitworth arrives at the Warleggan townhouse to ingratiate himself with Morwenna… she’s appalled she is expected to marry someone she doesn’t know, while he’s getting fitted for his wedding clothes. I do not love you; she says before fleeing his presence. Run girl run!

The troops George sent ahead find out they have been on a fool’s errand and are leaving when George turns up at the Meeting House where he finds grain legitimately purchased being distributed to the grateful poor.

Finding out it is his money that helped to secure the cargo being distributed at The Meeting House, to hundreds of people; George knows he has been tricked. He doesn’t like it one little bit especially when Caroline congratulates him – he would not have contributed if he had known he would be helping wastrels, he comments.

He closes the Wheal Leisure mine to put seventy people into poverty immediately, just to spite Ross for getting one up on him. Demelza finds it hard to believe. She still hasn’t come to terms with how evil George really is. Later Caroline sets off to London to see about having Dwight released. Just as in his makeshift hospital the French soldiers shoot the friend Dwight has been helping to recover from his wounds.

It is all too much for Dwight to bear, he’s overwrought, overtired at not having slept in so long and becomes totally distraught about his situation. Is all hope finally lost

Five villages nearby to Nampara now have grain and will survive the winter, but there’s more in trouble and Ross regrets having saved some to totally destroy others. Ross Poldark and some of his miners, Poldark Series 3, BBC One

Ross eager to help takes on thirty more men to work his own mine, as it has a number of promising new seams they need to explore and with Wheal Leisure now closed it won’t affect the ore’s price on the market.

In town, it seems Elizabeth may have had a change of heart, Morwenna and Geoffrey Charles are to be sent back to Trenwith, and they are overjoyed.

Drake, Demelza and Sam come across Geoffrey Charles and Morwenna’s coach stuck in mud and help to free it up. Now Drake knows the woman he loves is back and Demelza is worried where their re-union might lead.

We are left with a vision of Drake and Morwenna wrapped in each other’s arms down at the seashore. They will surely be the next of George’s many victims.

How did we get through our week before this compelling soap opera to divert us?

Blood Swept Lands and Seas of Red as the Tower of London’s moat is filled with over 800,000 red ceramic poppies, commemorating WW I Centenary; 11 November, 2014