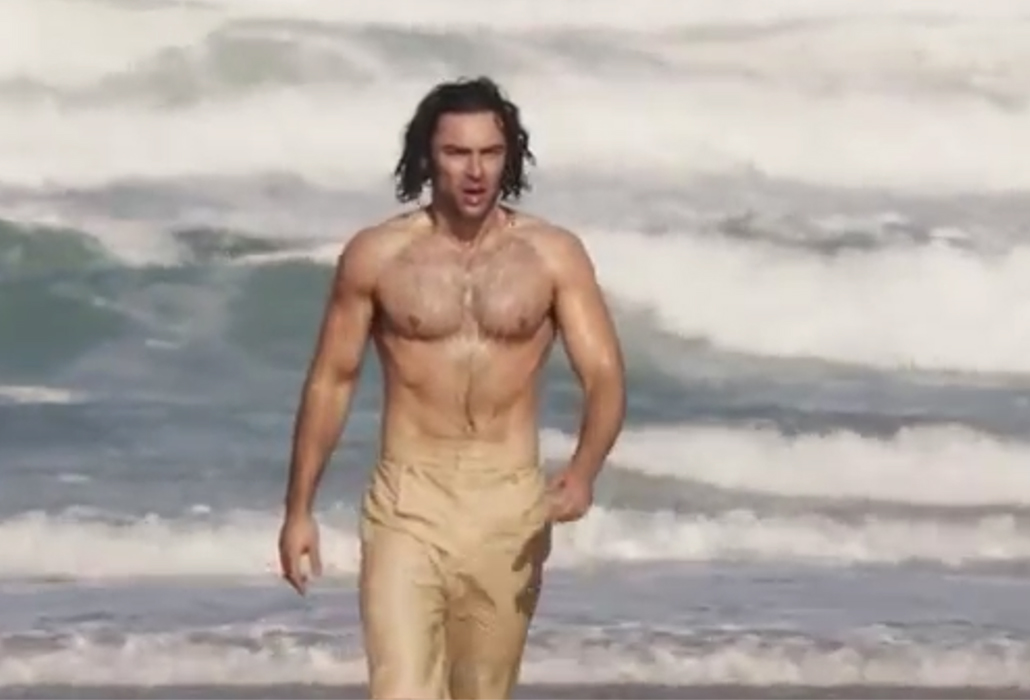 The fourth Summer celebration of life is back, as Ross Poldark (Aiden Turner) strides out of the sea and back into our lives in the popular BBC TV Drama Series POLDARK.

Ross rises symbolically out of the waves after an early morning swim, where he has been endeavouring to put images of his lovely wife Demelza (Eleanor Tomlinson) being unfaithful to him out of his mind, when suddenly she appears at the top of the sand dunes with their two children to declare they are all ‘still here’. 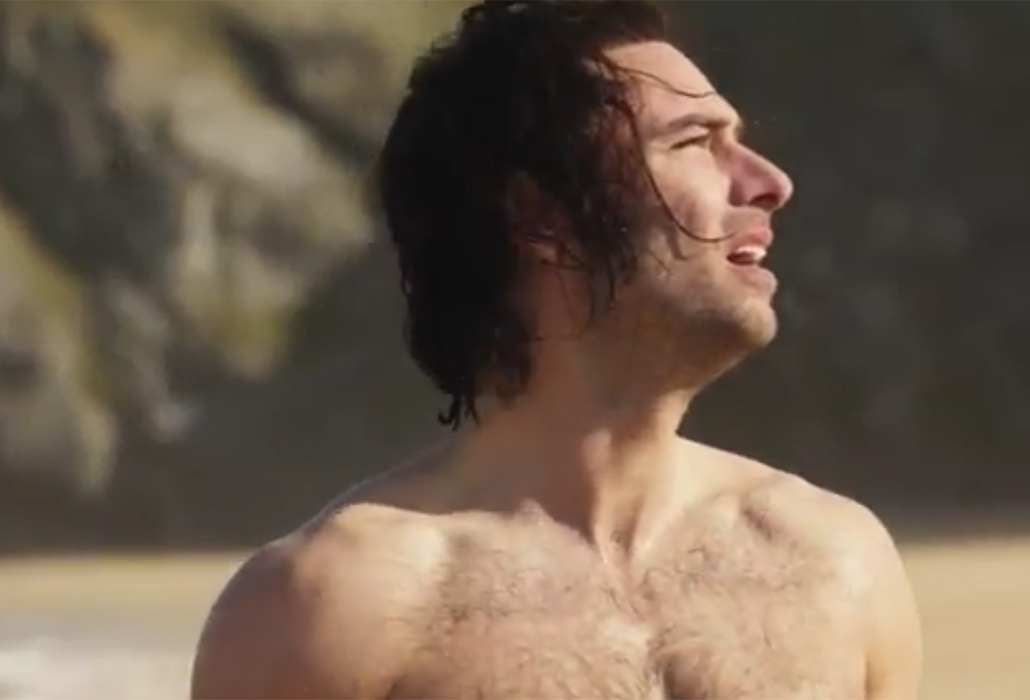 Aren’t we all, the desire to find out more is so palatable all out here waiting for their adventures to begin again, we can taste it.

POLDARK is without doubt top notch English drama, of the very best kind.

Definitely a tongue in cheek opening scene for this much awaited fourth series by the makers, the story of Ross Poldark by Winston Graham is a novel as perennial as English daisies. He seemingly has the ability to always make the sun come out. Braving the chill of the sea along the icy coasts of Cornwall, he certainly needs to. Indeed, this is another example of why this television series has become so beloved around the world. Here are two people who do love each other deeply but like most couples in their lives together, come up against many challenges that will test their courage and commitment to the very end. 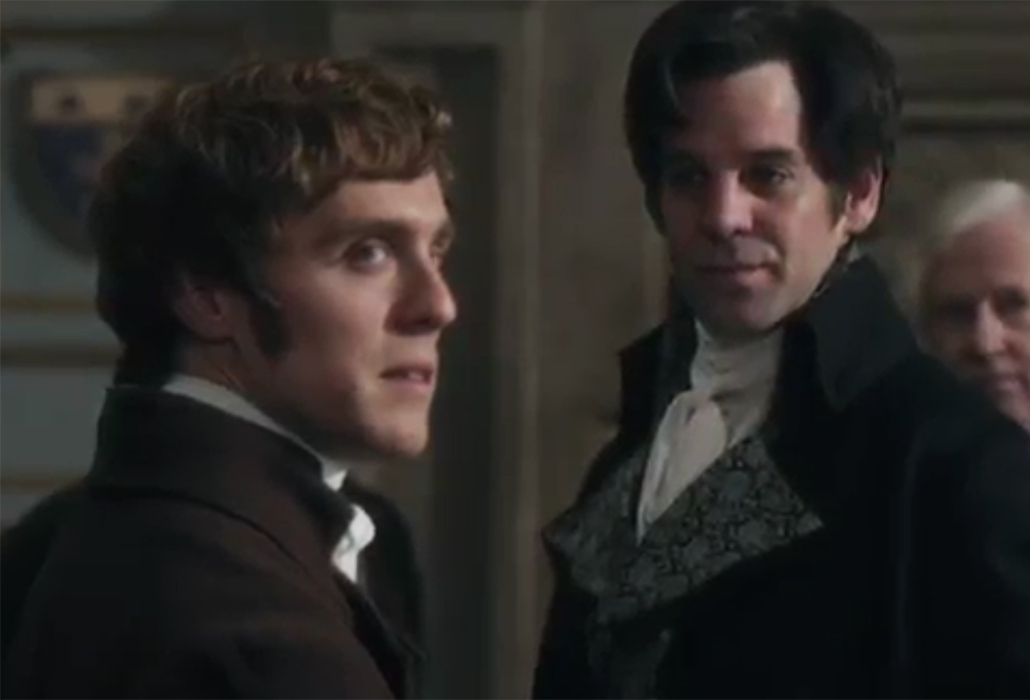 It’s a dramatic start, as Demelza and Ross try to rebuild their partnership. At this time they’re calling for an election up in London in Parliament, with Ross’s arch enemy and evil cousin George Warleggan (Jack Farthing) is once again, in the thick of it all.

Over at Trenwith House, the family seat, Elizabeth (Heida Reed) is telling George she cannot be wooed by gifts from London… she says she expects more from him, especially if they were to have another child – she’s keeping him dallying on the end of a string. Let’s hope she manages the length, it wouldn’t be good for her to earn his wrath. 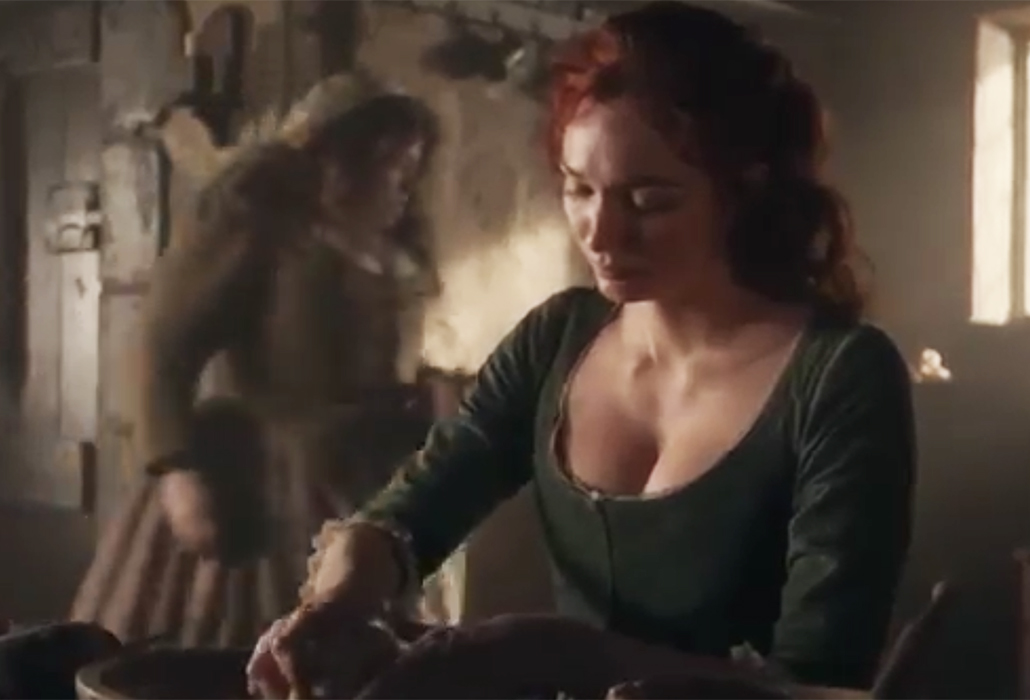 Back at Nampara Farm high above the coast in Cornwall, Demelza is singing while kneading the bread and her maid Prudie (Beatie Edney) is carrying out her chores, keeping a close eye on her mistress.

Over at the local church there is still no conjugal bliss for the oily Vicar Osborne Whitworth (Christian Brassington) and the wife he coveted and forced into marriage with him Morwenna Chynoweth (Ellise Chappel).

She’s managing to keep him out of her bedroom for now, but he’s on the prowl and peeping at her through holes drilled in the walls – her future looks grim indeed. Ross and his best friend Dr Dwight Ennis (Luke Norris), attend the funeral of Aunt Agatha Warleggan, much to George’s chagrin. Elizabeth is as always, the perfect hostess, thanking them for attending, which only sends George’s temperature rising further.

Ross suddenly finds after the ceremony ends that George’s patron Sir Francis Basset (John Hopkins) has invited himself to Nampara for tea, which Demelza suddenly finds herself serving on little notice.

Milord Bassett talks to Demelza about the feud between the Poldarks and the Warleggans and would she help bring it to an end. Boldly Demelza calls on him to do the same, and end his feud with the Armitage’s, which she knows is sure to end badly in the end. Demelza has a secret; she’s just had a letter with a poem from her love-sick boy Hugh Armitage (Josh Whitehouse) who she is trying to let down gently. She burns the poem knowing it being found would only cause more distress for her and Ross.

There is unrest in Cornwall, with no promise of work and the local mining young bloods are on the warpath into Truro town to take on the merchants, who are sending grain abroad rather than support local trade and help the poor who are starving.

Word comes from Truro about the troubles and so all the men of land including Ross and Dr Ennis are summoned. Milord Basset taking control, sends them both to arrest the men of their district including Demelza’s brothers Drake and Samuel, who are on the list, although they were never involved. Ross tells Demelza it was very bad and there were arrests… but he doesn’t tell her about her brothers and Jago Martin (his friend Zacky Martin’s son), who were accused by George’s men.

He’s trying to protect her but the devious George has, unbeknown to Ross and Dr Ennis, moved the trial forward so he can convict his brothers in law in Ross’s absence.

Drake and Samuel, along with Ross’s are among those sentenced to hang to make an ‘example’ for the rest of Cornwall. Ross goes to plead to Lord Bassett for mercy… but George is there interrupting as always, so we know any thought of mercy will be far afield. 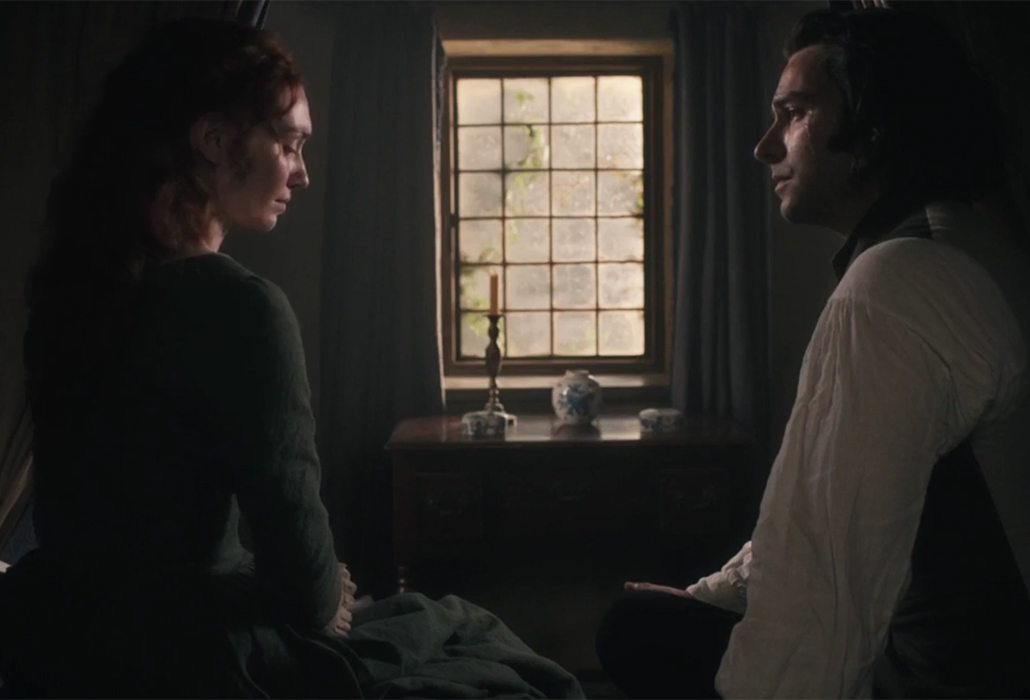 Back with Demelza they talk about the trouble and how he has to leave again for Truro, although he’s still not told her Samuel and Drake are involved.

She’s planning a visit to the Armitage’s home with Caroline (Gabriella Wilde) and Dwight Ennis the next day and is in complete oblivion to the fact Ross is racing to Truro to try and stop her brother’s being executed.

Dr Ennis talks to Hugh on their visit about his ‘fragility’ caused by his incarceration in France. While he denies being not well, Dwight Ennis knows otherwise. 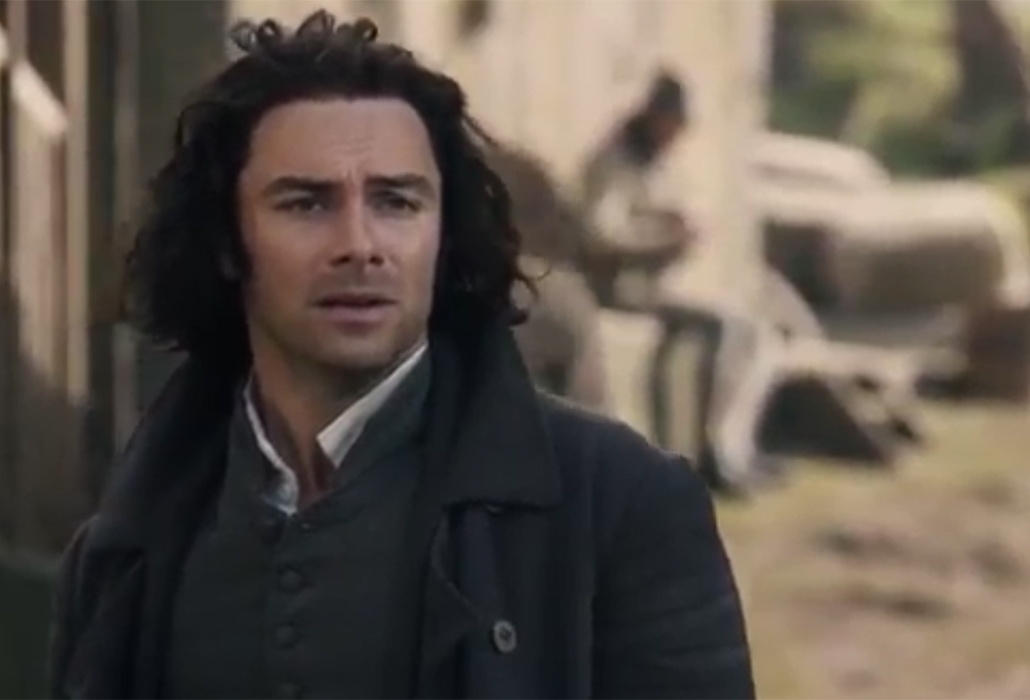 Ross Poldark (Aidan Turner) trying to save Samuel and Drake Carne, Demelza’s brothers, in the fourth series of the popular BBC One television drama

Demelza asks Hugh Armitage while they are there that this be the last time they meet and he tells her not to see her will be the death of him.

Meanwhile at the hanging in the square in Truro Ross is making an impassioned speech and calls for reprieve for the men. The whole town is behind him and so the magistrates led by Sir Francis Bassett confer, much to George’s fury.

Jago as his death statement from the gallows declares Drake and Samuel only came to the affray to dissuade him from being involved. With Ross ‘s intervention they are finally set free, but Jago is hanged, much to Zacky Martin and the townpeople’s distress. He was much liked by all.

George is entirely miffed about the state of his affairs and declares to Elizabeth back at Trenwith he is weary of this backwater. She tells him what he wants to hear, pledging that they will return to London after his re-election, before taking him to her bed.

Right at the end there is good news at last. First up Dwight is delighted when Caroline tells him they are expecting a baby.

Then Demelza comes home and Ross tells her how her brothers were reprieved and she is mortified and overjoyed at the same time. 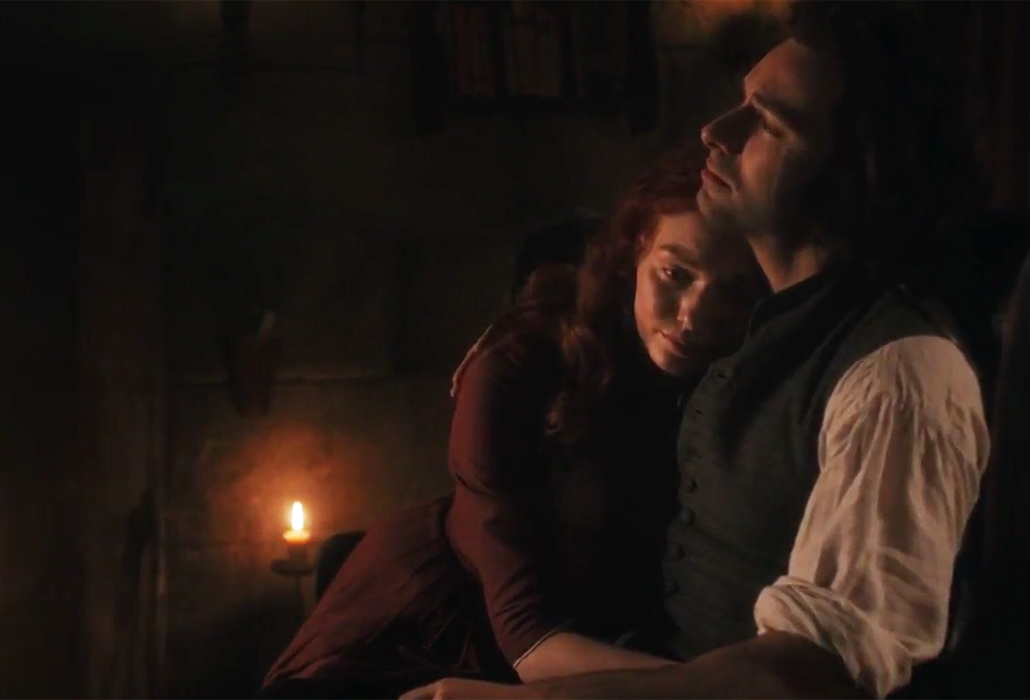 Ross Poldark (Aidan Turner) with his wife Demelza (Eleanor Tomlinson) finding each other at last, in the fourth series of the popular BBC One television drama

Later, Ross and Demelza sit by the fire and talk together and he tells her … what she is to him… indispensable, irreplaceable… you are the better part of me, he declares.

They question how two people who love so much can understand so little about each other. “Is it too late” he asks her gently … I hope not she answers sincerely and the first episode of POLDARK Series 4 ends quietly, as Ross enfolds his beloved gently in his arms.

An 18th century village master craftsman, who designed and made furniture in rural Yorkshire Thomas Chippendale (1718 – 1779) was a progressive ambitious chap