Music creates camaraderie and has been proven medically to have many therapeutic qualities, including providing an atmosphere wherein calm can prevail in our busy world. Visiting the National Gallery of Victoria on Friday January 10, which is all abuzz with their landmark summer show Melbourne Now, I came across a piece of Public Art; an upright Piano placed outside in the centre of the entrance, which had the very simple instruction ‘Play Me I’m Yours’.

There were a number of protagonists standing eagerly in line to take a turn at tickling the ivories. The idea is that everyone and anyone can have a go. You don’t have to think that you are a budding Mozart, just to pretend that the piano is like a canvas for artists, a blank page on which you can write your own tune. There are 24 street pianos currently on the streets of Melbourne. Who knows how it may turn out. It could be a defining moment in someone’s life, or a significant step along the way to a musical career. It’s an exciting and harmonious way of linking community and culture and the project will be live in Melbourne until the 27th January 2014. 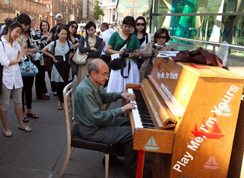 Melbournians, it’s time to leave your home or office and set out to find a Pop Up Street Piano NOW. The brainchild of an installation artist Luke Jerram in England back in 2007, it’s a phenomenon that he has personaly help to spread worldwide meeting mayors, celebrities and dignitaries in all sors of marvellous places. 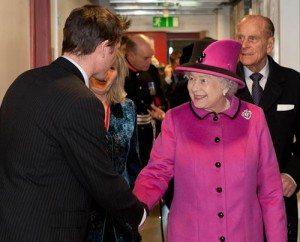 In cities like London, hundreds of perfectly good, working, second-hand pianos get thrown away each year. Jerram transports dozens of pianos annually, to countries where the instrument is rare and more valued, for the public to enjoy.

Piano’s are located in public parks, transport shelters, train stations, markets and anywhere that they will prove the public to engage with, and take an active ownership of their urban environment. In Boston the Mayor welcomed Luke to that city. 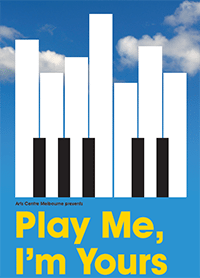 After being presented as part of a ‘Play Me, I’m Yours’ installation many of the pianos are eventually donated to schools and community groups within the local area. The Melbourne Arts Centre has created special complimentary events around the pop up pianos. Find out more online.