Australian of the Year, Rosie Batty, singer Katie Noonan, comedian Judith Lucy, writer Marieke Hardy, ABC broadcaster James Valentine and former politician Barry Jones have one thing in common. They have had their life in the genre’s of art, letters and sciences recognised by some 295 female artists competing to win the annual Portia Geach Portrait Award, which offers a prize of $30,000.00. Jac Clark entry is Meeting Rosy Batty, an acrylic on canvas. Florence Kate Geach, in memory of her sister Portia Geach, established the award in 1961 to recognise her sister’s great creative gifts. The Portia Geach Memorial Award has been running now for 50 years. Today it is demonstrating the impact Portia’s legacy continues to have on female artists today. An active feminist and artist, born in 1873 in Melbourne, Portia won a scholarship to the schools of the Royal Academy of Arts at London and went on to work in England, Paris and New York before settling in Sydney in 1917. 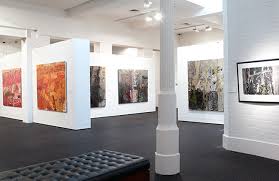 The winner of this 50th anniversary year will be revealed 17 September, 2015 with an exhibition of all the finalists open for viewing by the public at the S.H. Ervin Gallery, The Rocks from 18 September to 25 October 2015. The judging panel is Publisher and Trustee of Art Gallery of New South Wales, Eleonora Triguboff, Trustee of Art Gallery of New South Wales, Samantha Meers and Director S.H Ervin Gallery, Jane Watters who remarked “… the judges were delighted with the number of submissions and the diversity of approaches in this year’s award.

Deborah Walker has chosen to render a self-portrait of when she was young, reading “The Idiot”, in oil on linen.Her work is held in many public, private and corporate collections and her paintings, drawings, sculptures and prints operate as an interplay in the the discussion of her interests. Jane Watters said “We were particularly pleased with the independence of vision drawing upon wide ranges of personal imagery that reflect influences from both historical and contemporary art. We trust the selection recognises the commitment of Australian female artists and reflects the innovation in contemporary portraiture.” 55 finalists has been announced for the Portia Geach Memorial Award 18 September – 25 October 2015. List of finalists | National Trust SH Ervin Gallery Portia Geach Portrait Award