All have painted portraits integral to the first exhibition of its kind Portrait of the Artist at The Queen’s Gallery, Buckingham Palace, London, November 4, 2016 – April 17, 2017. Some are self-portraits, while friends, relatives and pupils painted others. The display will be focusing on images within The Royal Collection, one of the largest and most important art collections in the world.

Painting is a language of expression with its own grammar and vocabulary. Portraiture is about empathy; the ability of the artist to enter into the sitter’s emotions and convey these feelings to another; the goal to make that person experience empathy.

The portrait as a record of an individual’s personal appearance is one of the most successful and enduring genres in art we have. During the fourteenth century in Italy objects were given a third dimension. Through an arbitrary arrangement of light, shade and color, artists sought to make three-dimensional objects that melted into the ambient atmosphere, inter-fusing one with the other, until the whole became a single pictorial effect.

One of the most notable portraits in the collection is the work considered the only reliable surviving likeness we have of Italian polymath Leonardo da Vinci (1452-1519), recorded by his student Francesco Melzi c1515, a master of harmony using red chalk.

Leonardo da Vinci wanted to paint the ‘motions of the mind’. Sadness was a mood artists of his time rarely depicted, but after Leonardo da Vinci and his life in painting, the world of art would never be the same again.

From the Dutch and Italian Renaissance masters of the fifteenth century to pop culture artists of the twenty first century, self-portraits over the centuries have been mostly self-promoting, as the artist sought to advertise his or her talents and to gain a reputation for excellence. It was all about attracting the attention of monarchs, nobles, powerful merchant families and haute bourgeoisie patrons, so that they would commission their work. The rediscovery of ancient texts during the fifteenth and sixteenth centuries in Europe changed perceptions, with accomplished architects and artisans collectively ushering in a new era in art, design, music and style. Central to that development was the emergence of the artisan as a creator, an artist who was sought after, supported and respected for his erudition and imagination.

Renowned as a ‘painter of princes and prince of painters’, Sir Peter Paul Rubens travelled freely among the royal courts of Europe and portraits he rendered are considered very fine. He is known to have discussed matters of State with both Sovereigns and their Ministers, while recording their faces so we would know about their contribution to history. Jan de Bray of Haarlem in The Netherlands appeared as a soldier in a portrait of the Egyptian Queen Cleopatra and her Roman General Mark Antony, with his parents modeling the famous pair along with all of his siblings. Cleopatra is shown dissolving her pearl earring in a glass of vinegar to win a bet about who threw the most extravagant banquets. Dutch painter Daniel Mytens (1590-1647) spent most of his career in England painting for James 1 and his son Charles 1. Love the way his eyes in his self-portrait c1630 seemingly follow you around the room. Mastering reflection was an important part of a human quest to know and understand our identity at this time. Over the centuries the mirror became a metaphor for eye catching deception.

During the seventeenth century mirrors were still rare, expensive objects and gradually they would affect the way we perceive others. Advancements in optics emboldened artists to be experimental.

Italian painter and a major follower of the revolutionary Baroque painter Caravaggio (1571-1610), Artemisia Gentileschi, as the Personification of Painting, presents a remarkably unorthodox representation of a woman at an early date and from an unusual angle.

By using a pair of mirrors, she captured herself in an enigmatic portrait that used contrasts of light and dark in figurative composition, to produce a dramatic affect. A Flemish painter, Van Dyke visited England at the height of his powers and was greeted royally, given a knighthood, a pension, a gold chain and lease of a house at Blackfriars and introduced the grand manner of the Continental Baroque style.

His ability to capture the national character meant that his English portraits are decidedly English, a fact that it is fascinating to attempt to analyze.

What we do know is at that time they could not have been painted anywhere else in the world. To what extent did Van Dyck idealize his subjects? Most scholars feel a great deal. Young men in his portraits were always attractive, women always looked beautiful, and they never looked old.

Doubtless he was endeavoring to flatter his wealthy patrons inordinately. Rubens portrait of Van Dyke is thought to have been painted between July 1627, when Van Dyck returned to Antwerp from Italy, and August 1628, when Rubens left Antwerp for Spain. One of the most exciting revelations when preparing for this landmark exhibition, was when during conservation work on the painting known as ‘A Vanitas’ by Pieter Gerritsz van Roestraten (c.1630–1700), The Royal Collection Trust conservators uncovered a new element to the picture – the artist’s self-portrait. 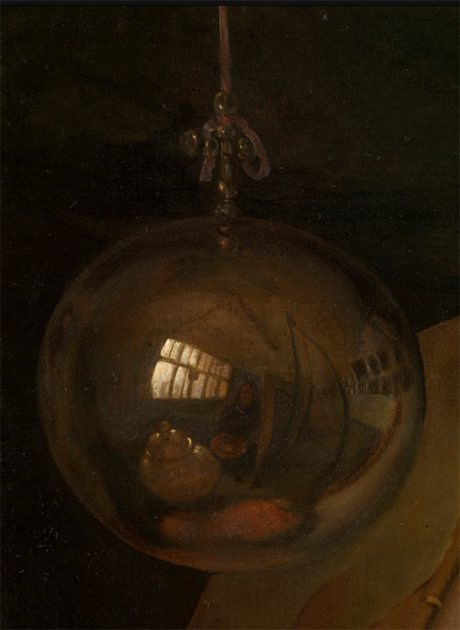 Roestraten became renowned during his age as a painter of luxury objects. Injured during the Great Fire of London, he loved challenging the viewer to find concealed elements in his work, which they delighted in doing.

During the removal of discoloured varnish, The Royal Collection Trust conservators found a 3cm-high image of the artist at his easel painted as a reflection on the glass sphere.

Roestraten can be seen looking directly at the viewer and towards the skull and silver ginger jar in the foreground of the picture.

Anna Reynolds, Senior Curator of Paintings, Royal Collection Trust, and co-curator of the exhibition, said, ‘Vanitas paintings traditionally focus on symbolic objects that are designed to make us think about how we live our lives. The discovery of Roestraten’s reflection, previously hidden beneath a layer of varnish, is very exciting and adds a new element to the work – a sort of pictorial game that encourages us to look more closely.’ Senior Curator of Paintings Anna Reynolds adjusts a display of miniatures, part of a set of 224 copies of self-portraits from the Vasari Corridor of the Uffizi by Giuseppe Macpherson. The complete set are on display for the first time at The Queen’s Gallery, Buckingham Palace in Portrait of the Artist, Royal Collection Trust, © Her Majesty Queen Elizabeth II 2016

During the latter part of the seventeenth century portrait painters found their clients in a rapidly widening field and in English country-houses, both great and small. In 1707 the Act of Union brought England and Scotland together under one flag and parliament as Great Britain.

The new Britons felt an urge to national self-definition. Any gentleman of standing at this time had two wigs, which lent maturity to the callow, and youth to the old. They also cancelled out baldness! Portraiture is at the heart of British Art although The Third Earl of Shaftesbury, in his Essay on Taste of 1712, attempted to delete face painting from the canon of true art. ‘Tis an abuse of real art, which should be reserved for better purpose’ he said.

Sir Joshua Reynolds (1723-1792) became the nation’s most celebrated portraitist and the first president of the newly established Royal Academy in 1768. He led the campaign to raise the status of portraiture and infused the portraiture of his age with an unprecedented sophistication, learnedness and dignity.

This is an exhibition, if you are in London, that will be well worth seeing. Edward Seago, HRH The Duke of Edinburgh painting on the deck of the HMRY Brittania, 1956 © The Estate of Edward Seago, courtesy of Portland Gallery, London

Portrait of The Artist

Blood Swept Lands and Seas of Red as the Tower of London’s moat is filled with over 800,000 red ceramic poppies, commemorating WW I Centenary; 11 November, 2014