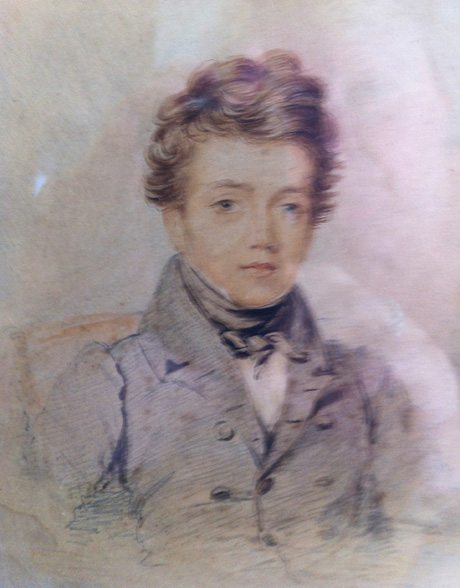 I have owned, for a long time, a lovely small portrait drawing of the upper torso and head of a young man on the brink of life. I was inspired to look at him in more depth when re-reading a book entitled ‘Elegance in Exile’, purchased from the National Portrait Gallery at Canberra.

This beautifully published work is full of portrait drawings from colonial Australia, including those by a former convict, the painter, writer, critic, voluptuary and man-about-town Thomas Griffiths Wainewright (1794-1847), who created a small, but very influential body of similar work.

Not to say that mine may be by him, but he is posed the same way as many of the drawings illustrated, redolent of his time.

Before being found guilt of forgery in England and transported to the Australian colony, Wainewright had moved in elite intellectual circles. His hallmark was that he always portrayed his sitters with a ‘steady and respectful manner’.

Mine seems to perfectly suit that philosophy. He is disposed in a simple pine frame, which I have suspended from a red ribbon.

The historic style of the clothing he is wearing informs me that the sketch was more than likely rendered during the first few decades of the nineteenth century.

Perhaps it came here to Australia with a relative from England or, he may have emigrated and it was drawn here and passed down through the family until it was sold. The so-called Regency period he was born into was an era in Europe and England dominated by men and events. It was a period of extraordinary political change, of revolution, scientific discovery, dazzling artistry, literary excellence, military milestones, politics and social scandal.

It was also an age that had an engaging cast of characters.

The disappearance of the powdered wig in the early 1790’s marked a revolution in polite society and in London wild hairstyles exploded onto the Regency scene. They included the central curl, crimped or cropped locks of long, lanky and languishing dukes and dashing dandies.

My young man is wearing a cravat tied with a certain casual dash at the neckline, and his open jacket has extra buttonholes on the lapels, so that it can be buttoned shut, much like a naval jacket especially if he finds himself in a stiff gale or breeze.

His hair is worn natural, short waving hair casually tousled, which also gives it an early nineteenth century date as an aspect of the ‘romantic’ age. I found him in an antiques store back in the 80’s and was drawn into giving him a home. I suspected the young man’s mother would have been pleased to know the image of her son, at such a poignant time in his life, had survived so many generations after his passing. As a mother of three sons myself, I had perhaps a little inkling of how she may have felt and he has travelled with me ever since.

My portrait of a young man is not by any means a posh or wealthy image, but rather records a time when there was a demand for ‘art as information’, and when the elegant art of drawing was an important pastime in polite society.

Today he’s helping to define my art of memory and being inspirational, is helping to keep alive ideas of hope.