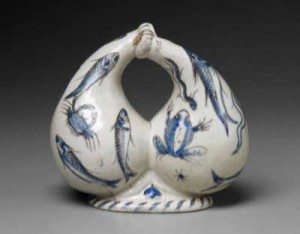 According to tradition a small porcelain bottle preserved in the Treasury of St Mark’s Cathedral at Venice is one of the pieces of precious oriental porcelain brought back from Cathay by Marco Polo. Venice was the major centre for the manufacture of glass and maiolica in the fifteenth century in Europe and, in 1461 the Sultan of Egypt presented 20 pieces of Chinese porcelain to the Venetian Doge, Pasquale Malipiero. Other gifts were made to Lorenzo de Medici, who already possessed a famous collection of treasures, many of which were sold in 1494 following his death. Cosimo 1 de’ Medici, Duke of Tuscany restored his families collection of wonderful objects and by 1587 there were 400 pieces of oriental porcelain the descriptions of which, in the old Medici inventories, are fairly accurate. During the sixteenth century pieces decorated in blue and white were quite numerous, as compared with the rarer ‘porcellane verdi’ the celadons or green porcelain wares. 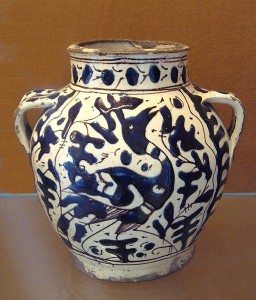 During this period serious experiments began in Italy to reproduce oriental style porcelain. Two brothers, Camillo and Battista da Urbino were engaged in 1561 by Duke Alfonso of Ferrara to make maiolica and porcelain; they failed in the later endeavour, and after ten years their experiments were abandoned. In 1573 Flamino Fontana, a member of a well known family of maiolica makers from Urbino was paid for firing some pieces of porcelain. Cosimo 1 was succeeded by his son Francesco and it is recorded that, under his patronage, the method of making Indian (that is, oriental) porcelain had been successful. 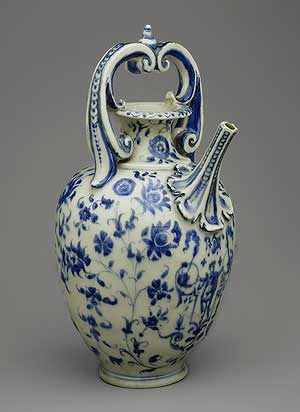 Florentine porcelain of the sixteenth century was a great achievement, but in nature and composition it was entirely different from the Chinese. It was made by mixing together an impure kaolin, lime and white sand with finely ground up glassy material and rock crystal. This was the first version of soft paste porcelain ever made in Europe. While the glassy constituent gave the fired clay the required translucency but it didn’t achieve the hard body characteristics of true oriental porcelain. The majority of pieces still in existence were decorated in underglaze blue, sometimes bright and sometimes dull but all having great charm. Production of these early wares seemingly came to a halt in 1587 when the Grand Duke died as none have come to light or been authenticated after that date.