Precision and Splendor: Clocks and Watches is an exhibition currently on show at The Frick Collection in New York. The clocks and watches illustrate the stylistic and technical developments of timepieces from 1500 to 1830.  This mantel clock representing ideas about study and philosophy was made in Paris between 1785-1790, the time of the French Revolution. Men and women were busy questioning and seeking solutions to the challenges of their day by exploring key ideas such as autonomy, universalism and progress, developing perspectives relative to their time. It is one of five spectacular clocks on loan from Horace Wood Brock that reflect the precision and splendor of the art of clockmaking in eighteenth-century France. 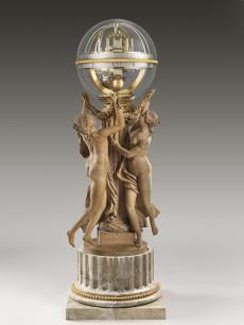 French sculptor Claude Michel Clodion (1738?1814), one of the most inventive and technically gifted sculptors of the eighteenth century, produced the lovely terracotta figures of dancing nymphs holding up the glass sphere of the world on this clock made at Paris in 1788, just prior to the revolution. It was designed by renowned clockmaker Jean-Baptiste Lepaute and allows us to see through its transparent sphere to see its mechanisms; pendulum, rotating dial and small bell. One of the earliest clocks in the show is this lovely gilt brass number with a pierced dome on top. It was thought to have been made about 1530 by Pierre de Fobis (1506-1575). 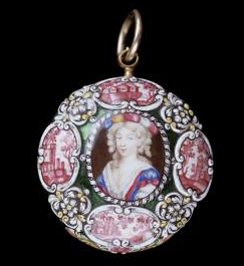 The watches are pretty spectacular too, this one has divine enamelling inside and out attributed to Pierre Huaud (1612-1680) and dates c1660. The Frick Collection has one of the most important public collections of European timepieces, the bequest of New York collector Winthrop Kellogg Edey. It was an extraordinary gift of thirty-eight watches and clocks dating from the Renaissance to the early nineteenth century covering the art of horology in France, Germany, Switzerland, and the United Kingdom.