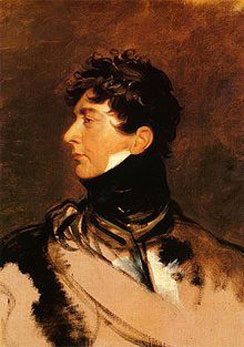 During the 1790’s a debate on the ‘picturesque’ landscape raged, ending up having little practical application at all; its exponents supported an aesthetic, which included overhanging crags, swiftly flowing streams, gnarled oaks, and tortuous paths. This was in the main not acceptable to the majority, who wanted to enjoy looking at, and being in; nature. So they looked to wall paintings from the ‘antique’ to provide new role models. The steam engine was invented, fuelling progress and powering the country’s manufacturing. Towns all over the United Kingdom began to grow and prosper. In England the Prince Regent’s friend Beau Brummel set the style for dress, which was followed avidly by HRH and his friends. They all changed clothes incessantly and Roman curls and the Prince’s ‘black cravat’ became quite the rage. During the last decade of the eighteenth century industrial upheaval and social change came about when Thomas Paine (1737-1809) published his Rights of Man in 1791, influencing the French and American Revolutions.

The Bodleian Libraries at Oxford in England have announced the newly acquired letters of renowned Czech author Franz Kafka (1883 – 1924) to his favourite sister Ottla, who died in the death camp at Auschwitz during World War II, are on public display for the first time.