After viewing the very inspiring and successful printmaking exhibition Trails at the Incinerator Art Space, by prominent Australian Korean born Seong Cho, I was curious to learn more about her background and the influences on her artistic practice.

We arranged to meet at the Incinerator Art Space and Café. Once again I was immediately impressed by her warmth, sparkling eyes, animated expressions and generosity of spirit. 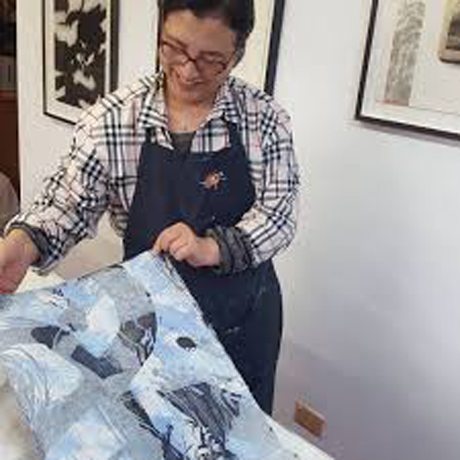 She is very comfortable with herself and her self- assuredness shimmers in her communication and is strongly reflected in her artwork. When she decides on a course of action she is passionately determined, a trait that fervently underpins her daily life and artistic practice. Seong was born in Korea in 1955. After the Korean War, South Korea suffered economically in the 1950’s, but later transitioned to democracy with a rapidly growing market economy.

At a very early age Seong demonstrated a love of drawing and was very contented to grab her sketch book, pastels or crayons and draw in the playground before or after her formal schooling.

Her interest in art continued to grow more seriously in her teenage years. Seong’s artistic talent was recognised when she won school art competitions. In Year 11 of high school she made the resolute decision to study art at university.

But there was very strong opposition from her family especially her father. He was very protective and concerned about the vulnerability of his beautiful daughter. He had preconceived ideas that women who became artists often lived very decadent lives.

After much anguish struggle and negotiation, Seong compromised by taking the more conventional course of a Bachelor of Applied Art.

Seong’s long held desire to study Fine Arts would not be accomplished until after she immigrated to Australia in 1989. Her first professional employment was as a graphic designer.

At university in Korea she received training in the figurative discipline and she was examined on realistic and life drawing.

She is now grateful for this significant foundation as it underpins her current practice.

After she arrived in Australia she completed an Advanced Diploma at Sydney Gallery School, Meadowbank TAFE, majoring in sculpture. She is very tactile and was drawn to sculpture assemblages and installations.

Robert Klippel whose “vision stands alone in the history of Australian art” according to the press release from the Art Gallery of New South Wales had a marked impact on Seong. As a constructivist sculptor his wooden and junk assemblages resonated aesthetically with Seong.

Ian Fairweather is a leading Australian abstractionist from the early modernist period. His unique artworks were influenced by the pictorial traditions of Europe and oriental calligraphy.

This is reflected in his painting and supported by John Olsen’s insightful comment about Ian Fairweather’s artworks “he was writing the landscape.” She articulates “woodprint technique and calligraphy inspired brush stroke design stemmed from my Korean cultural heritage, something that is extremely important to me as an immigrant to Australia and being so far away from my own country.”

In 1953 Fairweather built a hut on Bribie Island in Queensland where he spent most of the later part of his life. Seong was so inspired by his creativity that she travelled to Bribie Island to learn more about the man and his art.

Kazimir Malevich the Russian pioneer of geometric abstract art was “extremely interested in the mystical movement theosophy and in expressing a spiritual reality beyond the physical through his art.” (www.moodbook.com) Seong was so fascinated by the works of Malevich at University that in the first year of her Master’s degree she wrote her thesis about him, his painting and the Suprematism movement he founded.

Seong is totally committed to contemplation and this has evolved from Zen practice originally established in Korea. Emptying her mind and looking for spiritual ‘place’ is essential, it is the fundamental force behind Seong’s artistic practice and her beliefs.

Mark Rothko, abstract expressionist from New York revealed a profound mysticism in his artworks. He saw his art as a spiritual process and Seong makes a deep connection with the spirituality in her own art practice.

Jackson Pollack’s writes “painting is a state of being … Painting is self-discovery. Every good artist paints what he is.” Seong believes her individual thoughts and way of thinking is manifested in her artworks. Her mind is in her art and her art is in her mind.

She finds tranquillity in her art practice and is humbly respectful of her process of creating.

Seong prudently explained she experienced an excruciating period of personal difficulty and was unable to accomplish any art for seven years. When finally able, she made the decision to return to print making for the rest of her life.

Settling on this medium has given her the opportunity to combine her experiences in graphic design and sculpture.

She carves her wood blocks for printing while honouring her Korean spiritual and cultural heritage. As she acknowledges her Korean identity she deliberately contributes to Australia’s multicultural society.

“I’m passing down the cultural heritage of being Korean and perhaps that is my ‘task’ in life” declared Seong. She reminisced about visiting a temple as a child where her mother explained that when each child is born they are given a special task to perform in life.

Once a week Seong works in her studio frantically trying to achieve her goals working diligently resolutely and passionately absorbed in the art of printmaking. She is respectful of nature and this reverence evolved into making many of her own materials. She loves using pure ingredients that are based in nature and tradition. They allow her to design different textural markings.

I was especially intrigued by the paint brushes she makes and was surprised to learn some have a life of their own and move by themselves in a mysterious and magic fashion.

Trails was Seong’s first solo exhibition and its achievement was followed the very next day by news that Trails XX, a finalist artwork in the 3rd Biennale Ink Masters Print Exhibition 2016 in Cairns had sold.

Her achievements continued. Her artwork Trail X111 was selected as a finalist in the International Prize of Contemporary Art LYNX 2016. This artwork will be exhibited at the Gallery Associazione Culturale 11 Sestante, Trieste Italy.

Seong hopes to travel to Italy to attend the Exhibition Opening and enjoy the wonder and excitement of observing her own work and its place in the current international print making scene. I wished her a safe and rewarding journey as our conversation ended and her smile lingered.

Many splendid garments will be displayed in 2016 with three separate exhibitions entitled, Fashioning a Reign: 90 Years of Style from The Queen’s Wardrobe in UK