When King George II died in October 1760 and an 18 year old King George III came to the throne the first Hanoverian (German) monarch to be born in England and to speak English at Court as his first language, (not French, the lingua franca used by his father and grandfather) patriotic fervour knew no bounds. Huge crowds welcomed his bride Charlotte of Mecklenburg and cheered them both at their coronation. Briefly helped by a fine summer with good harvests and orchards heavy with fruit, the nation was at ease; the moment felt right for new projects and new adventures. England’s high society considered itself by now the most civilised in Europe. King George III (1738-1820) of England’s family set an example for that of a life of domestic felicity, which was taken as a model of propriety by the population at large. This was a great change from his father and grandfather George I (1660 – 1727) and George II (1683-1760) who had both set horrendous examples. George 1 divorced his wife on a trumped up charge in 1694, having her locked up for life in the fortress castle of Dahlen in Hanover. There only son, later George II who loved his mother and hated his father and his father hated him. In fact the first two George’s reputedly ‘hated their sons’. George II treated his wife Queen Caroline abominably; he was rude, snubbed her constantly, fell into vile rages and expected her to treat his mistresses with great civility, and she obliged him. George III lived very cosily in the snug bosom of his family. He was the first middle class monarch and the first British monarch to distinguish his private residence from his public office. He and the Queen retired early, forbade their daughters to read romances and only offered his equerries barley water as refreshment. He openly condemned his aristocratic subjects for a lack of piety, as well as exceedingly lax morals. Charles II and his court had been satirized for their lewd and light hearted ways; George III and his court by way of contrast 100 years later were constantly lampooned for penny pinching sententiousness – inclined to moralize more than is merited or appreciated. 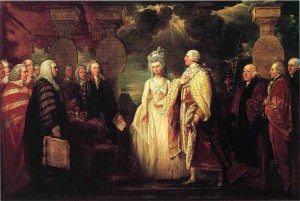 Watch a show or join an organisation, dancing is good for us all and from ballroom to stage, whether you watch or want to dance, its heartily good for the soul