The lovely island of Tasmania south of the Australian mainland has more recently become known as the ‘island of inspiration’ due to its relatively unspoiled natural wonders. The native forests of this picturesque place are today a vital link in the world chain of precious natural environmental resources.

Protecting the pristine wilderness of the great Tarkine area in the north west Tasmania, with its vast cool temperate forests of leatherwood, sassafras, myrtle and great Huon pine trees, perhaps the oldest trees on earth, you would think in 2013 would not only be a concern of both local, state and federal governments in Australia, but also a no brainer for all thinking men and women.

The more than 447,000 hectare region roughly covers the expanse between the Arthur and Pieman rivers – and encompasses a broad array of diverse landscape features with outstanding natural and cultural values. Its spirit is something that can only be experienced in person.

Recently an amazing announcement from Get Up – Action for Australia made me feel nothing but dismay and disillusionment. The Minister in charge of the ‘environment’ MP Tony Burke”, the letter from GetUp , said, “has just announced he’s backing down from protecting Tasmania’s Tarkine wilderness, ignoring the recommendations of the Australian Heritage Council  the principal adviser to the Australian Government on heritage matters, and instead allowing mining to expand”. How can he in all conscience do that?

In the past humankind when faced with challenges hasn’t always looked for the easy way out. Jumping hurdles and inventing new methods and processes is what we do. Today with the knowledge we have at our fingertips in the press of a button you would think that Mr Burke would be able to rise to the challenge and sort it out. 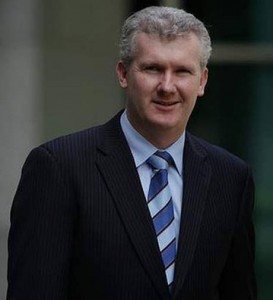 Instead Minister Burke’s decision completely ignores the carefully deliberated recommendations of the Australian Heritage Council, with whom a huge proportion of Australians agree when it states that the Tarkine deserves world heritage listing.

We cannot just keep destroying our own habitat for short term gain. In the end it will mean an even higher cost that will have to be paid by our children and their children’s children.

Tony Burke has confirmed many people’s worse fears, that the wonderful Tarkine wilderness, which should be protected at all costs in our great southern island state of Tasmania, will now face an uncertain future.

Surely there has to be a point to stop. A line in the sand to draw. Call it a moral, social and cultural high ground if you like, one that is shaped by our deep and growing knowledge and respect for our natural environment and its awesome power, as well as a respect for humankind, including ourselves. This is our largest remaining single tract of Gondwanan rainforest and one can only imagine scenes of great bulldozers tearing the soul out of the land as they advance. Shades of ‘Pandora’!

This decision is without doubt a massive betrayal of Tony Burke’s obligations as the chief protector of Australia’s environment and our culture and significant natural heritage.

Will we never learn from our past mistakes? The mining proposed will rupture the environmental integrity of what is an irreplaceable Australian icon, for little gain and extinction of yet another unique animal species, the Tasmanian devil. As if its not bad enough that the koala is balancing on the brink of extinction, now we will add this animal’s demise to our crimes as well. They will be wiped out once and for all because of human ignorance and greed, as the Tarkine is the home to the last disease free population of this unique species.

Free settlers, who first came to Australia following the arrival of the first fleet in 1788, appreciated the uniqueness of the Australian landscape and fauna. They believed once they were here it was more than likely the site of the original ‘garden of Eden’ and their move to it held out a promise of rebirth.

However as the country grew and greed kicked in it seems we did not grow in wisdom and some humans leveled whole areas of Australia a hundred years ago, which only added to the serious erosion of our land, establishing even greater regions of drought by their actions.

The natural world contributes so much to who we are.

What the forests provide is integral to the lives of all Australians and contributes to keeping our country, its democratic freedoms and its culture active and alive. There must be some other way to gain the ensure protection of the sensitive environmental areas of the Tarkine? This virtually primeval rainforest has survived for millions of years.

The Huon pine (Lagarostrobos franklinii) germinated above the Pieman River near Mount Read in Tasmania some 6,000 years before the Egyptians were celebrating their Great Pyramid.

The trees can live for up to 3,000 years and by studying the tree rings of ancient Huon Pines, climatologists have been able to establish a continuous record of climatic change over more than 3,700 years. There is one pine, Tasmania’s oldest resident, which still stands today long after the first wonders of the ancient world began to crumble. With due care, this rare endemic species would outlast dug-out canoes, sailing ketches, cruisers, plus the bowls and furniture of today’s expert craftsmen.

History certainly has a strange way of repeating itself. Is Tony Burke the man who will now ensure its total demise?

Australia needs men and women of vision right now. Tony Burke said to media that “I simply haven’t been able to find a way to recognise the natural heritage values with a boundary that will find a balance.”

Well Tony, that’s just not good enough. It is your ‘job’ to find one, otherwise step down and let someone who will take on the challenge step up and be counted.

All people, regardless of race, ethnicity and creed, who live in Australia from the 21st century onward will need to pull together as one, if we are to define and shape the continuing development of our nation.

Tony Burke needs to hear just how distressed the Australian public is with his decision. We need to tell him loud and clear.

Find out more about Get Up – Consider joining the independent movement that wants to  build a progressive Australia and bring participation back into our democracy http://www.getup.org.au/

Naturalist and botanist Sir Joseph Banks (1743-1820) advised Australia’s first Governor Phillip about what plants to take to New South Wales to sustain pioneering troops and convicts. He advised they could be obtained en route. Taking corn and wheat seed from England at the Cape of Good Hope Phillip gathered…