Provence, Provence, just by saying your name many believe they can almost savour the piquant freshness of your renowned goat cheeses and taste the enticing soft bouquet of your delicious local wines.

Your French country style is very much admired world wide. It has developed through the people, the produce of the land, and the practical elements necessary for everyday life.

‘When the green is fresh it is a rich green like we rarely see in the north, a soothing green.  When it is burnished or covered with dust it does not become ugly for it, but the countryside takes on gilded tones in all the nuances; green gold, yellow gold, pink gold or bronzed, or coppery, and from lemon gold to an ombre yellow’*

Provence is a region in southern France that has clear and clean air when, from time to time it is swept from the north, or northwest by the Maestrale or mistral wind. It plays an important role in creating this cleansing climate. It is c’est magnifique when the mistral dies down and cloudless skies and luminous sunshine appear. Then we can enjoy viewing the suns rays reflecting off waving fields of golden wheat, or flowering crops of precious lavender while its soothing perfume wafts over us on a gentler breeze.

From a lofty vantage point high in its mountains you can view the beauty of a peaceful valley below where the river Aigue Brun (aigue being the Provencal word for water) winds its way through verdant valleys.

You can also journey along a gently winding road to the highest heights where you can stop at a small restaurant hidden away in a scenic spot.

There you can join people from all walks of life savouring the delights of the local cuisine in an atmosphere of congeniality. It is a happy, relaxed atmosphere in a place where time seemingly stands still.

Every marauding army in history has more than likely passed through the same spot. While you are there you will become aware that you are really only but a small dot on the amazing history of this ancient place. The Franks, the Goths, the Visigoths, the Burgundians, the Saracens, the Normans and the Romans all came, saw and conquered.

Around 125 years after the birth of Jesus Christ the Romans gave this extraordinary territory its name, which came from the Latin word Provincia. Its rugged terrain provided safe passage between the city of Rome and its Iberian territories. 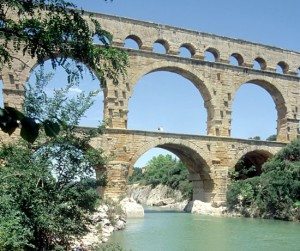 The Celts were a diverse group of tribal peoples from the Iron Age who inhabited much of Europe by four centuries before the Christ event.

Together with the Liguriens, the original inhabitants of the Cote d’Azur, they melded together establishing more than thirty towns.

They traded vigorously both with the peoples who came from the sea, the Etruscans in the north of Italy as well as the Greeks at a trading post, which we now know as Marseilles. The Romans wanted to be part of this thriving trade. Not liking unsavory religious practices, which included human sacrifice, through a series of wars they conquered the Celtic-Ligurien races to take Provence for themselves.

By the first century the Romans controlled most of Provence and with it, the people, the commerce and trade.

Aix en Provence had natural springs and the Romans established a system of aqueducts that carried water from natural springs into the town and their bath houses, bathing being such an important aspect of their daily health ritual. Aix takes its name from Aquae Sextiae – the waters of Sextius, who was the subduer of the Celts. Many fountains encrusted with limestone and moss decorated with dolphins still remain as a symbol of empire departed.

When the Romans finally withdrew they left behind many rich architectural remains.

The Fort de Bukes (Buoux) set in the south range of the Luberon mountains looks down over a precipitous valley like so many others in which the people of Provence fell prey to any tribe that happened to be passing.

Provence is roughly divided into three areas, that of the mountainous areas towards Italy, which are poor, isolated and austere. Then there is the coastal and Maritime area along the Mediterranean, containing all of the important ports such as Marseilles, Nice, Cannes and Toulon. Then there is the area around the Rhone, where in its valleys tall slender cypress shade farmhouses with herb gardens that come from Roman heritage

The style of Provence represents a view of French country style, which has been transmitted internationally. This earthy, fertile, sunbaked region of France for many is at the very essence and heart of French Country style. It continues to charm visitors and influence  designers and decorators worldwide. When climatic extremes, such as the notorious mistral wind strike they wisely retreat indoors and bolt their shutters.

This is a land where magnificent avenues of plane trees provide a link from the road to the Provencal garden. The height and length of their planting may impress the visitor with the extent of the owner’s dominions. 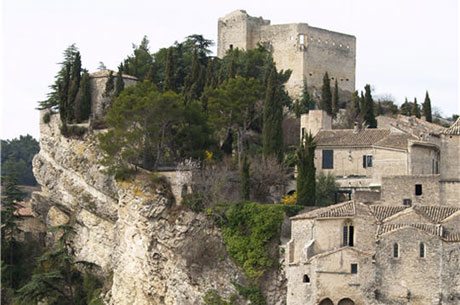 However the reason they are there was not that because the Renaissance nobles who planted them were not concerned with the Mediterranean climate, but in fact were more in need of wood for the gun carriages of cannons, ship masts, rifle butts, furniture and even matches.

Whether public or private these great avenues today afford fabulous protection from the fierce summer sun.

They create softly filtered light and provide a strong sense of a protective enclosure, producing a pleasurable effect.

Country roads throughout Provence are bordered in graceful trees, providing shelter on relentlessly hot Provencal summer days.  Many of these were planted during Napoleon’s reign as Emperor in France. On his order they were planted in great stands and set each side of a village on all the  main routes to and from Italy.

This allowed his troops to lie down and rest in the shade and for the villagers to provide the food and sustenance they needed. Their mature beauty today enhances the look of the Provincial landscape.

The hill villagers in Vaison La Romaine fortified their town by using the terrain as their defense.

Clustered around the summit of limestone hills it has been continuously occupied since mediaeval times, the houses in alleyways no wider than a pair of passing oxen.

They were built when the need arose, and improved upon only when the pocket permitted.

The builders paid less heed to architectural conventions of symmetry than to a pressing need to make the most of limited space.

During Spain’s occupation from the 12th century we could assume that the influence of leather work and metal work on furniture first started.

Provence until the end of the fifteenth century was a group of states entirely separate from France.  It had its own language, government and a sense of style, with deeply rooted ideas and philosophies first founded in strong traditions. They kept goats and ate fish, grew herbs in abundance, as well as olives which were introduced by the Greeks. With the fabled vitis vinifera grape vine for stock they made wine and became great consumers of wild boar as well as truffles.

The oak forests of Provence would have been prime truffle territory then as now. The little slivers of this celestial fungus harbors many of the amusing stories of the region.

They were often obtained by nefarious means or through a local truffle fair not listed in any tourist guide.

For three hundred years from the fifteenth to the eighteenth century Italy continued its influence of the area by negotiating binding commercial treaties linking Genoa, Florence and Venice with Provence. All of these had a very great influence on the designs of local craftsmen.

At Fontaine de Vaucluse the silver tones of olive trees contrast strikingly with the hues and rough texture of rocky outcrops that litter the mountains in the South Range of the Luberon. As we approach the ancient village of Gordes in the Luberon Mountains we come across the old abbey of Senanque standing in an extraordinary setting.

The harmony of the brown stone of the roofs, the white stone of the walls, and the violet of the flowering lavender, makes for a striking contrast with the plateau whose rocky outcrop was once littered with borie, or the dry stone huts used by shepherds and early Christian hermits.

Evidence of the traditions inherited from classical antiquity are still strong in Provence.

At the Jardin de la Fontaine in Nimes is one of the most famous and elegant shrines of the Roman world.

It was resurrected by King Louis XV (1710-1774) who surrounded it with a great garden preserving its heritage for the glory of France, and the use of its people. 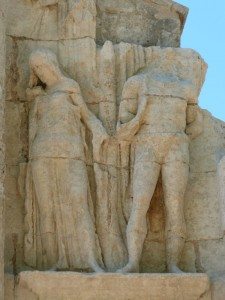 In this wonderful public space is a marvelous mixture of French and Italian influences, drawing the two cultures together in a dramatic feature.

There is a complex series of monumental steps and levels leading to the Roman baths where you can still today both soothe your spirit and refresh your soul.

Today the people of Provence continue to both nurture the land and harvest the sea treating each new arrival with the same resigned equanimity they do for the annual invasion of at least one and a half million holidaymakers.

In Provence a graceful flow of the earth’s natural elements is in evidence – human, geological, botanical and architectural. They emphasize the layers of its unique history in a place that is now one of peace, joy and contemplation. It is a place where man and nature have seemingly come together in complete harmony. The mistral may not howl down your chimney, but the exuberant spirit of Provence and innate style of France’s peoples can be yours if only you dare reach for it.

Showing and sharing your love on Valentine’s Day has grown in Australia from almost being a non-event to being all the rage, at least for generations post 1970.