Among the cargoes brought into the port of Marseilles in Provence during the mid seventeenth century by the Compagnie des Indes Orientales were desirable cotton prints from India.

They consisted of dazzling patterns and striking colours, which captured the imagination.

Quickly they gained an enviable reputation for being colourfast, which made them appear almost miraculous.

The colours included red from madder (garance plant) and blue (indigo plant) and they became generically known as ‘indiennes’ because of their origin.

These light, vibrant prints became enormously popular and quite the Vogue at Paris and at the court of Louis XIV. Aristocrats and artists turned them into all manner of fashionable apparel. ‘What would life be if we had no courage to attempt anything? One must work and dare if one really wants to live’* Famous playwright Jean-Baptiste Poquelin (1622 – 1673) known as Moliere, starred as the foolish hero in a production of his play for the King Le Bourgeois Gentilhomme in 1670 at the court of Versailles dressed in the popular prints worn upside down.

It was a great lark.

The result of this craze at court seriously jeopardized the growing silk and wool textile industries of France. It became so serious that in 1686 King Louis XIV through his Arts and Industry Minister Louvois, was forced to ban the import of the much sought after cottons from India.

Banning the product only further fueled the fire of demand and smuggling became the order of the day. It was much the same over in England where the instant popularity of cottons from India, called chintz resulted in a depression and even riots in the silk and linen weaving trades.

All was blamed on Queen Mary (1650 – 1702). She had a perchance for colourful printed fabrics, and we can well understand why when viewing this delightful historical stuff.

The trade however was found to be damaging the English manufactory, and so the English Parliament, passed an act in 1720 to restrain and prohibit their use. (It forbade ‘the Use and Warings in Apparel of imported chintz, and also its use or Wear in or about any Bed, Chair, Cushion or other Household furniture‘.)

The passion for these fabrics caused local manufacturers to take notice and the first recorded manufacture of copies of them using carved wooden blocks to print from in France was at Marseilles in 1656.

Some of the Grand Seigneurs and Grandes Dames at the French court decided they should grab an opportunity to fund production of an all new local product. However the quality was not nearly as good as the imported.

During  the eighteenth century the ever expanding markets for trade in textiles from both the Middle and Far East contributed greatly to the success of many western economies.

Industrial weaving and spinning centers improved greatly at this time, and mechanization led to a fall in prices and expansion of English and French textiles onto the world market.’ France had to remain competitive.

The late eighteenth and up until the mid nineteenth century would become the golden age for Provencal fabric design and manufacture.

Antoine de Beaulieu a young employee of the Compagnie des Indes committed industrial espionage to discover that metallic salts, called mordants were the key to the setting process. ‘

They combined with the dyes to form an insoluble compound on natural fibres. From 1758 Mme de Pompadour, the powerful mistress of Louis XV campaigned for a free trade in these materials.

By the second half of the eighteenth century, France’s production was at last becoming competitive and Louis lifted the ban in 1759.

Because the cotton fabric was so light it brought about a revolution in European clothing.

Being easy to wash made it also very suitable for bed hangings, bed curtains and bedspreads. 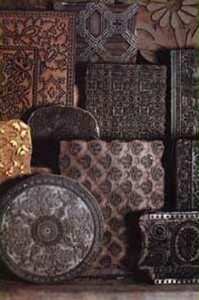 By 1785 at Tarascon one company dominated the area with its production of superbly printed cottons. Working from a library of print designs, from dainty to dramatic, with fruits, florals, paisleys and geometrics, the traditions associated with the company we know as Souleiado, was started during the eighteenth century by Monsieur Jourdan.

He produced large scarves for ladies (mouchoirs) in three varieties. 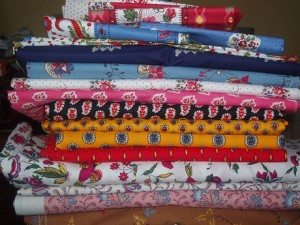 Brightly coloured scarves were exclusively for girls and young woman, grisailles, or muted greys were deemed appropriate for women  “of a certain age”, with deuils, or sombre toned squares meant for older women and widows.

The fabric’s manufacture had three elements. The base cloth, which was made of high quality cotton of over 150 threads per square inch.

The graceful block based prints added were a mélange of naiveté and sophistication. And their colours reflected the flora of the regions in France in which they were manufactured.

Under Louis XVI (1754-1793) and following the Revolution, the most popular prints were produced on a bronze coloured base covered with flowers, vines and herbs.

Together with other fabrics – such lawns and batiste, the cotton fabrics used in the new French Empire period were meant to project an image of a taste for harmonious simplicity in line with new ideas of democracy. Napoleon, Josephine and her ladies in the garden at Malmaison by Jean Louis Victor Viger du Vignea

During the early nineteenth century designs became more stylized and during the reign of Napoleon 1, petite designs came into vogue. Enchanted he bought baskets full for Josephine and the ladies of the court.

At this time the fabrics preferred were geometric, and many today still have a surprising contemporary look.

In 1818 one of the Avignon craftsmen printers, Leonard Quinche formed a partnership with two men from Tarascon to build a mill at St. Etienne du Gre near Tarascon. This mill was 140 years later to become known as Les Olivades.

By the middle of the nineteenth century, the arrival and acceleration of the Industrial Revolution in Europe and England provoked massive change, and the cotton industry suffered a further decline.

This resulted in a lot of small producers selling out or joining larger companies.

Great collections of the precious carved wooden print blocks were burned as detritus of another age. Only in areas such as lower Provence did a few companies manage to survive.

The designs were transferred from the few remaining old carved blocks onto copper plates, complete with imperfections – a charming touch. Traditions established so long ago with the indiennes still continue today in a blending of time honoured techniques and modern manufacturing methods.

Today chemical dyes replace the original vegetable dyes, but the colourful pastiche of shades and pattern really work well when mixed together with other fabrics, particularly en masse, and they combine brilliantly in all decorative schemes.

Their rich earthy colours look particularly attractive when combined with the dark patina of antique wood in a colourful house in Provence.

In its interior there is little effort to make everything ‘match’ or even maintain a continuity of periods.

What is to be admired is that the French mix what they like with what they need and with what the family has handed down with a sense of great style in a look that is both eclectic and cohesive.

This summer, 20th anniversary of Diana Princess of Wales death at Buckingham Palace in the State Rooms is a tribute to her loveliness and display of Royal Gifts