Their work, which was prolific, influential and of ‘high Victorian vigour’, was considered by their peers not only among the finest of their day in England, but also in Europe. Both Pearson’s and Pugin’s work were proof to the world England was a major power in world events, as well as a fertile and inventive nation. Auguste Welby Pugin’s ideas were given visible form and further impetus during the Great Exhibition of 1851 held at London under the encouragement and auspices of Prince Albert, the consort of Queen Victoria.

This important exhibition spread the influence of Pugin’s works far and wide and both at home and abroad. He expounded his theories in landmark publications of 1836 – Contrasts between the Architecture of the C15 and C19. 1851 – Chancel Screens and 1841 – True Principles of Christian Architecture.

However, more than often, he left the bringing of his intellectual and spiritual ideas to reality for others to pursue. 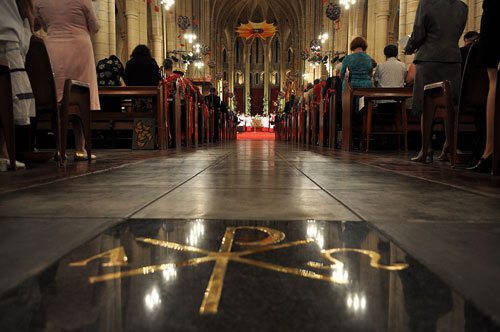 The Chi-Ro, inset into the floor of St John’s Cathedral, Brisbane

Pugin and Pearson’s connection with the expansion of the English colonies, established in the antipodes during the late eighteenth century, has almost been forgotten, especially in England.

That the Gothic style would transpose to the other side of the world to a country without a medieval past would not have been seen to be irrational to either Pearson or Pugin. For them the style represented a universal act of faith and was therefore entirely appropriate for worship. In Australia Pugin’s four designs for churches, included the original St Stephen’s Church at Brisbane, now acting as a Chapel for the later St Stephen’s Cathedral.

Essentially a picturesque village church recently restored, today it finds itself  at the centre of an expanding and busy city, offering an intimate space and opportunity for many to remove themselves from the hustle and bustle for prayer and quiet contemplation. In England during the nineteenth century the Church Building Act of 1818 authorized the building of churches so ‘the soul of the working man might be regained for the established church, for his own improvement and for the benefit of the nation’.

As the reign of George IV was coming to an end, a new generation of bright young ‘men of large designs’ rejected the neo-classical style of architecture of the ancients. It had prevailed in England from the reign of the first of the Hanoverian George’s (1714-1830).

They considered this ‘classical revival style’ totally inappropriate for church architecture because of its ‘pagan’ worship associations. The ‘Gothic’ style of the pointed arch pointed the way to heaven and came to be seen as the most authoritative and spiritual.

It represented for many, especially Pugin, the traditions associated with ‘Catholic Christianity’, which had prevailed in England prior to the English Reformation, a series of events in the sixteenth century, by which the Church of England broke away from the authority of the Pope at Rome and the Roman Catholic Church. The principle of the Gothic architecture is infinity made imaginable*

The Gothic Revival style of the nineteenth century in England became enmeshed with the Oxford Movement.

This was brought about by a committed group of ‘high church’ Anglicans.

They argued for the reinstatement of the very same Christian traditions of faith and worship that had existed prior to the time of Henry VIII and his daughter Elizabeth 1 – Anglo-Catholicism.

Many still don’t seem to know Henry VIII died believing he was still a member of the Catholic faith.

He left it up to his daughter Elizabeth to change the religion of state to Protestantism.

Pugin did much to revive and accelerate the preference for the Gothic Revival style in a career that was both short lived and brilliant.

He set out to, and succeeded, in also reviving the traditions of the decorative arts from the Middle Ages and added to the richness attached to the Catholic liturgy. He designed several Roman Catholic churches, including the Cathedral at Birmingham and St Oswald’s at Liverpool. 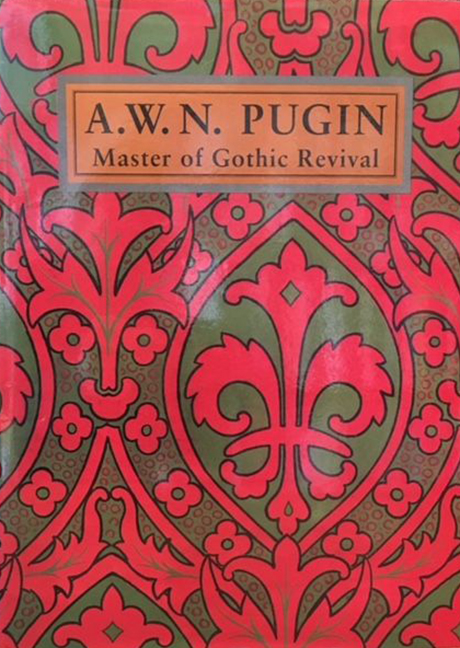 Pugin’s designs and detailed drawings for the decorations and sculpture for the Houses of Parliament (1836-7) in London, where he was employed by architect, Sir Charles Barry, also transposed to many areas of design and the decorative arts; ceramics, furniture, metalwork, illuminations, wallpapers, tiles, textiles, jewellery, wall painting and sculpture. You could say he was the one stop design shop.

His work inspired the passionate young group of painters and writers – the Pre-Raphealites, who, in 1848 in London. revived the realistic style of Italian painting before Italian Renaissance artist giant, Raphael.

As well, his work provided much of the framework for the foundation of the Arts and Crafts Movement of the latter years of the nineteenth century led by English craftsman, poet and socialist William Morris.

From his earliest training in his father’s architectural practice, Pugin was fast becoming the master. But who was Pearson? 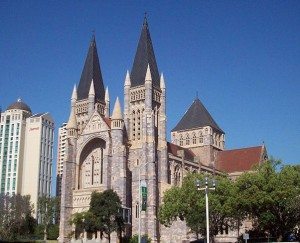 John Loughborough Pearson (1817-1897) built a number of country houses, although what is considered his most outstanding work was ecclesiastical.

At St John’s Anglican Cathedral at Brisbane in Australia Pearson gave fabric to the vision of nineteenth century Bishop Webber. Today St John’s Anglican Cathedral is only a few blocks distant from St Stephen’s Catholic Cathedral on the top of the hill.

It is a Gothic Revival style stone vaulted cathedral, whose great west end was finally completed and consecrated by Archbishop Aspinall in October 2009. Finally finished after 106 years of building, it is at the very pinnacle of Pearson’s achievements in Gothic Revival architecture.

However it is in Australia, not in England.

In the view of German born British art historian Sir Nikolaus Bernhard Pevsner (1902 – 1983), Pearson’s churches of the 1880’s were ‘among the finest of their day’.

Early in his career Pearson was a disciple of Pugin. He had a preference for stone vaulting and his buildings are characterized by a unified elegance of form.

He also expressed a great sensitivity for the importance of space as an aspect of the whole design concept. His style appeared ‘as fresh as if every thought of it had just come down from heaven’. It was, in the main, both assertive and confident and reflected the years of economic and social stability present in England during Queen Victoria’s long reign. Truro Cathedral in Cornwall is generally considered his finest work in England.

By nature Pearson was a quiet, unusually reticent man, who propounded the Victorian virtues of modesty, humility and devotion to duty. Pugin‘s personality was one of distinct contrast. He was headstrong, restless, argumentative and passionate. While Pugin’s memoirs do not mention Pearson, after Pugin’s early death at the age of 40, Pearson served on the working committee of the Pugin Traveling Fund and donated two guineas as a memorial to him.

John Loughborough Pearson was a successful establishment figure in England throughout his career and was honoured by being buried in Westminster Abbey. Gal Gadot is in a different league as Wonder Woman, together with director Patty Jenkins they have elevated our heroine to superstar status – a winning wonder!