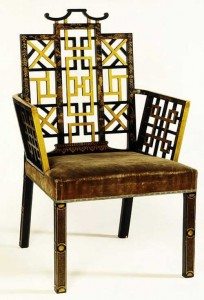 English purists are adamant the term ‘antique’ means you are talking about an item made before 1830; the date coincides with the death of George IV of England. This was the end of the so-called Georgian period (1714 – 1830) encompassing the reign of George I, II, III, the Regency of George, Prince of Wales and his later reign as George IV. This is seen as the cut off point when Master craftsmen last custom made fine furniture by hand for a wealthy elite. The Industrial revolution began with the building of the world’s first cast iron bridge over the river at Coalbrookdale in 1780 and it was not long before furniture was being made by machines. Before the nineteenth century an aristocratic elite who established high standards through patronage, guided artistic innovation. Today a ‘new aristocracy’ including philanthropic foundations, governments and large corporations provide the ready necessary.

The recovery of Sam Bloom wife and mother is paralleled with that of a baby magpie, through inspirational narrative and sympathetic photography by Cameron Bloom