Last week I was excited to see the collaboration between two Australian icons, Qantas through their CEO Alan Joyce and fashion designer Martin Grant, both seen here at the launch in Sydney with model Miranda Kerr and colleagues.

Qantas, nicknamed “the flying kangaroo”, is Australia’s largest airline and has been operating since 1921, and Martin Grant is a Melbourne boy living and working in Paris.

In sartorial circles, Martin Grant is world renowned for his exquisite tailoring and classic couture, but probably lesser known by locals on his home soil of Australia.

Having been in Paris since 1992, Grant has made a name for himself amongst some of the most fashionable femmes around.

She has championed him for many years and is often a front row regular at his shows.

In 1996 he opened his first boutique in an old barber shop in the Marais district of Paris. 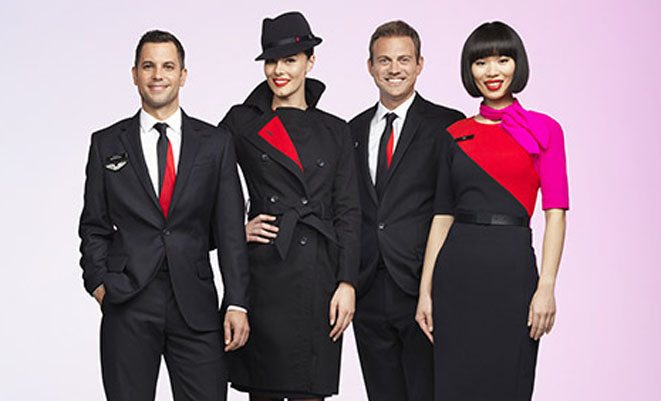 This closed in 2002, but he now operates out of his atelier on nearby Rue Charlot, dealing with private clients and wholesalers.

With an exceptional eye for detail and beautiful bespoke tailoring, he is a master of the classic silhouette.

What a perfect choice for Qantas.

When interviewed, airline staff were unanimous in what they wanted from their new threads, a vote to return to glamour was the answer .

They certainly got this from this divine designer, and in spades. 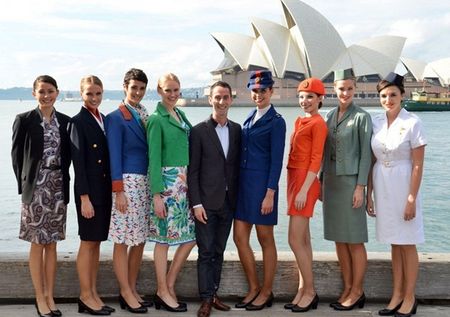 Now the baton has been passed to Grant, who was competing against fellow Australia designers Collette Dinnigan, Josh Goot and Dion Lee.

His polished uniforms will be introduced early 2014.

The uniform must be one of the hardest things to design, so many things to take into account.

First cost, then fabrics, thermal and even fire retardant testing, and finally styles to suit all shapes and sizes.

We must remember this is the real world, and not supermodel land! Grant interviewed hundred’s of Qantas staff to find out what they really wanted, and needed from their work wear. The result is a 35 piece range, using 15 types of fabrics, including our wonderful homegrown Australian wool. Being an international company, Qantas is operating on the world stage. Uniforms must be instantly recognizable for all the right reasons. 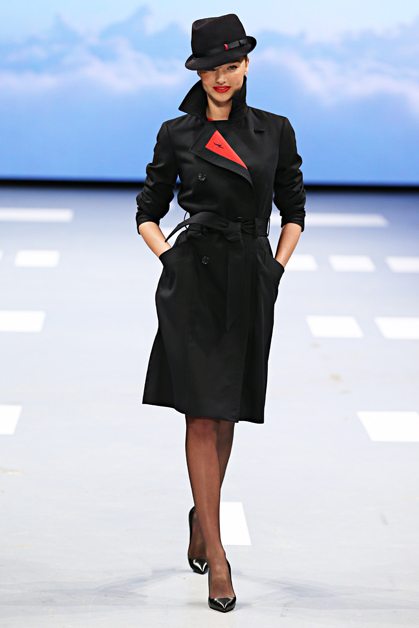 French navy, rich Qantas red, cerise pink and white are classic colours that are flattering to the masses. I am personally loving the French navy trench coat and cheeky Trilby hat, so stylish and so sophisticated.

It certainly adds a little international mystery and glamour, harking back to the 50’s and 60’s when air travel was both those things.

To quote Vogue editor-in-chief Edwina McCann “I really love it” ” Martin Grant is one of the best tailors in the world so his expertise really shines through with every piece”.

I also think he has been very clever with his placement of colour on each piece.

Rather than splash the red triangular motif somewhere obvious, he has tucked it away on lapels of vests, jackets and the trench, a gorgeous little pop.

Cerise scarves tied at the neck look oh so chic, and the French navy, making up around 70% of the garment (colour wise), are visually so flattering to all figures.

Slim leg and wide leg pants, knitted vest and Nehru jackets are all part of the collection, as well as a beautifully cut dress, that just skims the hips. All in all a highly successful collection that will serve the brand and staff equally well.

So if you are flying Qantas between April 18 and May 2nd, look out for select crew trialling their new looks. The only way is up for Qantas staff in elegant apparel like this.

The skies the limit!