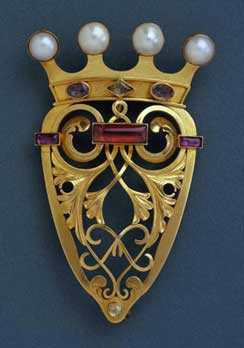 Queen Victoria received an openwork gold brooch from her beloved Albert in 1843,  accompanied by the text “from Albert Feby, 1843”, on their third wedding anniversary. It is of both romantic and symbolic significance. It is in the Elizabethan taste, a stylised crowned heart decorated with Gothic foliage and surmounted by four freshwater pearls from Scotland. It is set with amethysts, a garnet and two chrysoberyl. Chrysoberyl cat’s eye gems command relatively high prices, because of their rarity and beauty. Known in antiquity as oculus solis ‘eye of the sun’, the gem’s sharp ray of light superimposed on a green to yellow green to brown cabochon background produces a spectacular effect. The term cats eye in the gem trade is reserved solely for this species, of which Alexandrite is the rarest. Its remarkable characteristic is that it changes colour from red in artificial light to green in daylight.  It is named for Alexander II of Russia who turned 21 the day the gem was discovered in 1830 at the emerald mines near Takovaya in the Ural mountains. Although first found in Russia, much larger Alexandrites have since been found in the gem gravels of Ceylon., although they have less spectacular colour change than that of the Russian stones.

My journey with Cancer has offered new hope, and a route towards my having Immunotherapy, a treatment assisting the body’s immune system to fight the disease