“Progress lies not in enhancing what is, but in advancing toward what will be.”* The former Lord Mayor of Brisbane has proved that he 'can do' what he sets out to do' and Queensland could be set to be Australia's most progressive state in the next decade, the rest will watch with interest

On the 24th March 2012 the Queensland people had a historic choice to make. To vote for change or to stay with the status quo. There were probably many people out there thinking is there anyone left who will give us clarity?  Who will champion democracy and human development? Who will tell the truth” and, most of all, is the truth still out there? Well the people have spoken with a huge voice, and in Queensland it looks like it is now the government of the people, by the people, for the people and the place where it certainly ‘shall not perish from the earth’.

Since Queensland first became a state of Australia, which was charted and claimed for England by Captain Cook in 1770, it has become the fastest growing state in Australia. In terms of its human history it encompasses a long Aboriginal Australian presence with some 200 of the 600 – 700 Australian Aboriginal nations living in Queensland.. Parts of it were also explored by the Dutch, the Portuguese and the French.

Before Queensland became a state in December 1859 Brisbane, its now capital, had already separated from New South Wales and for some months was a city of NSW. Brisbane grew rapidly in the ten years prior to separation. Its growing maturity built a sense of civic consciousness that became the foundation on which an official administration could be founded and see it be declared Queensland’s capital. Brisbane’s first mayor John Petrie was age 37 when he came into office. He had been born in Edinburgh, Scotland and had arrived at Sydney with his family in 1831. His father became the Clerk of Works at Moreton Bay in 1837 and was its first free settler. As a young man John accompanied him on many explorations into the hinterland around Brisbane and as a result became well acquainted with the indigenous peoples, the vagaries of the land and enormity of the task ahead. 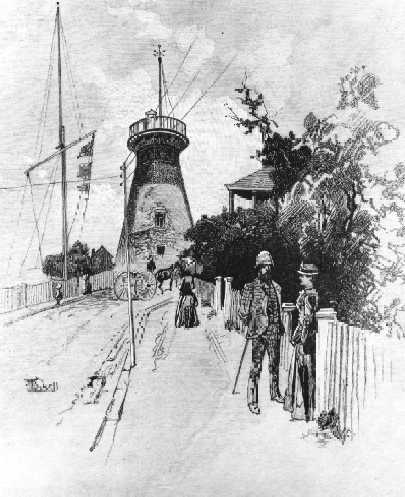 The Declaration of Petrie as Mayor was made on Saturday September 3 1859 after a successful petition by 420 householders. It was reported in the Moreton Bay Courier that Brisbane had been proclaimed a municipality.  A proclamation in the Government Gazette at Sydney on September 6 made it official. The Governor General Sir William Thomas Denison appointed James Gibbon, Returning Officer for the Brisbane Municipality. He and the other potential councilors met at the temporary offices in the Police Court to announce the result of the subsequent poll for the election of nine aldermen for the city of Brisbane. And their names were declared on Thursday 13th October 1859 at Noon.

By 1859 Brisbane was a sprawling colonial city with well over a thousand residences. 300 were of stone or brick and some 700 were weatherboard. The main settlement (North Brisbane) was concentrated along Queen Street, which was well defined by houses, shops and a thoroughfare to the eastern suburbs.  Adelaide Street was partly occupied between George and Albert Streets with residences along George and Elizabeth Streets.

By the time of incorporation banking and credit facilities were available and the prosperity of Brisbane was gaining impetus from the growth of the pastoral industry and its operations as a port for the districts surrounding it. The Bank of NSW, Union Bank and Bank of Australasia were operating and a succession of building societies was also established. Factories were expanding with coal mining ventures ongoing and agricultural development in its infancy. At South Brisbane in the area of the wharves, cottages were set amidst cultivated ground along the riverbank.  The third area of settlement, of which Dr Lang’s immigrants formed a nucleus were at Fortitude Valley, Outlying settlements were Kangaroo Point, Nundah and Sandgate. 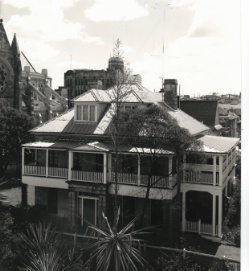 Adelaide House, Dr Hobbs residence that became the Deanery of the Anglican Cathedral

Public buildings consisted of the convict buildings converted to other uses. Customs House in Queen Street had been completed in 1850 and a new and expensive gaol was being built on Petrie Terrace in 1859. The School of Arts served as a public hall, community library, and lecture room.

The Church of England was consecrated in 1854. The Wesleyans had built in Albert Street and the Roman Catholics had constructed their first church in Elizabeth Street. The Presbyterians built in Ann Street in 1858 and the Baptists had a chapel in Wharf Street. Robert Cribb built brick shops with large plate glass windows and his competitors followed suit. Dr Hobb’s house on the hill opposite Kangaroo Point was one of the most prominent of all private residences. It later served as the first Parliament House, eventually becoming the Deanery of St John’s Cathedral on Ann Street.  JC Wickham’s house near Breakfast Creek is now known as Newstead House and open to the public. In the past so many died because they believed in the democratic process, that everyone should have an opportunity to fulfill their potential, and that the deeper purposes of a liberal education go beyond personal advancement or national competitiveness. It is all about being responsible global citizens who champion democracy and human development. We need people capable of exchanging ideas on the basis of respect and understanding with people from all cultures.

It is scarcely possible the transcendent importance of the change that has taken place in both Brisbane and Queensland since the election of the first Brisbane city council. We must not subscribe however to a miserable philosophy that in our modern age ascribes everything to the ‘spirit of the age’, believing that nothing can be done by the influence of individual character.  It is still individual character that is the inducement to great actions and the spur to great achievements. Today the Queensland people are all called upon to make their voices heard. Not one among them will be in a position to pursue his livelihood unless he becomes part of an enlightened majority – one that is animated by that very same ‘spirit of the age’.   The past cannot be changed while the future can…we may never get to the end of the journey, but all of us far from being discouraged, should be sure that what we contribute adds to the joy and glory of the climb.

The first Mayor at Brisbane guided a community of free men in a city yet to be made. In just 150 short years their vision has been exceeded many times.  The change they encouraged others to embrace has been constant as well as socially progressive. It is ironic perhaps that a former Mayor of Brisbane is now leader of the state of Queensland. He is a modern man of individual character who firmly believes in what he can do.

It is still individual character that is the inducement to great actions and the spur to great achievements. Under Campbell Newman’s leadership Queensland will remain a state of great optimism and be a dynamic crucible for change. Power is a trust and we are all accountable for its exercise; from the people and for the people all springs and all must exist …

A description of the manufacture of porcelain in 1713 by French Jesuit priest Father D’Entrecolles, a resident in Peking, relates the firing of blue and white porcelain ‘A beautiful blue colour appears on the porcelain after having been lost for some time. When the colour is first painted on, it…