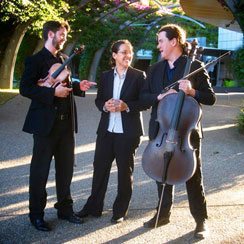 The Queensland Symphony Orchestra (QSO)’s Principal First Violin Glenn Christensen, QSO Associate Principal Cello Simon Cobcroft and pianist Angela Turner from Griffith University, who together make up The Lyrebird Trio, were awarded two titles in the 2013 Asia-Pacific Chamber Music Competition in Melbourne 8 – 14th July, 2013. The QSO Chamber Players series builds on a tradition established by many of the world’s leading orchestras of presenting regular chamber music performances featuring virtuosic musicians of the orchestra. This provides an opportunity for audiences to really see the individuality of players that might not ordinarily be so evident in the usual orchestral context. 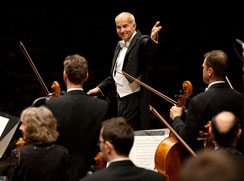 From the town to Toowoomba, from Morning Masterworks concerts to Chamber Players and many Maestro’s, day or night, the QSO offers its subscribers and attendees at their many and varied concerts, an amazing experience. On 27th July 2013 as part of the Queensland Music Festival now in full swing, the QSO will present the world premiere of Australian composer Matthew Dewey’s Ecstatic Visions – Double Concerto for Trumpet and Clarinet with James Morrison on trumpet and Julian Bliss on clarinet, conducted by Johannes Frizsch. At 7pm on Friday 9 August 2013 they will present Rhapsody on a Theme of Paganini at The Empire Theatres, Toowoomba. At 8pm, Saturday 17 August 2013 at QPAC the QSO’s Chief Conductor Johannes Fritzsch leads the Queensland Symphony Orchestra (QSO) to perform Dvorák’s Symphony No.8 and Slavonic Dances No.2 and No.7. Russian pianist Nikolai Demidenko will display his fiery brilliance in Rachmaninov’s Second Piano Concerto. This piece was used in the soundtrack for David Lean’s 1945 film Brief Encounter and more recently in Clint Eastwood’s film Hereafter. 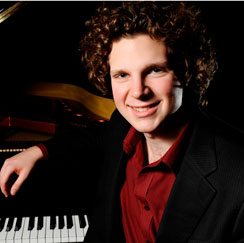 I like the sound of the QSO’s Morning Masterworks concert on Friday 6 September at QPAC, commencing at 11 am. Queensland born London based pianist Jayson Gillham will be coming home in August to perform the most popular work of Norwegian composer and pianist Edvard Grieg (1843 – 1907), his Piano Concerto which is considered a symphonic marvel. The concert will be conducted by Guest Eivind Aadland.  Jayson won the UK’s Commonwealth Musician of the Year Gold Medal in 2012. 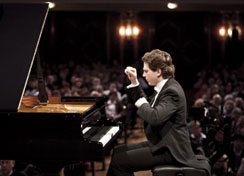 Jayson Gillham hails from the rural town of Dalby in Southern Queensland. In October 2010 he enjoyed great success in reaching the semi-finals of the Warsaw Chopin International Piano Competition, the first Australian to be able to claim such an achievement, in what is generally regarded as the greatest piano competition in the world. Gillham has performed with the United Kingdom’s Hallé Orchestra, the London Philharmonic Orchestra, China’s Wuhan Philharmonic Orchestra, and in major venues throughout Germany, Italy, Scotland, Spain, the United Kingdom, and the United States. He plays regularly in Australia, returning each year for recital, concerto, chamber music, and festival appearances. Visit the QSO’s Website for a full list of coming concert events and booking information.

The Return of the Hero, a period comedy and Back to Burgundy, a contemporary drama, are about human frailty, and on show at AF French Film Festival in Australia