A huge hit in New York, War and Pieced is a very successful travelling exhibition of terrific textiles; Quilts made from military fabrics, which have been chosen from the extensive collection owned by Sydney based leading International authority Annette Gero. 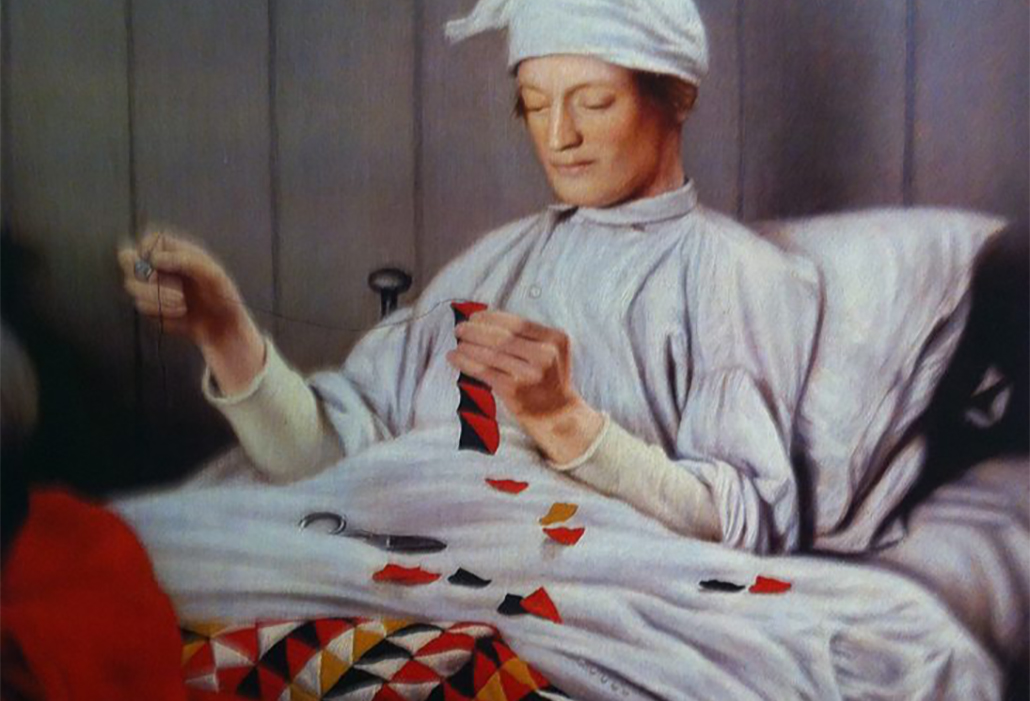 It was in 1986 when Dr Gero was made a Fellow of the Royal Society for Arts (London) in recognition of her work on Australian quilt history, her personal quilt collection considered a ‘national treasure’.  Hers was a journey, which started off as a hobby, and has ended up today as her primary career. It will be a surprise for many Quilts were ‘made by active soldiers and prisoners of war from pieces of disused uniforms, army blankets and other military fabrics’ during the Napoleonic Wars (1803-1815) and the Crimean War (1853-56), which took place mainly on a peninsula between the Black Sea and the Sea of Azov, as well as both World War I (1914-1918) and World War II (1939 – 1945).

“A form of ‘Trench Art”, Dr Gero commented, “… these rare, surprisingly beautiful artifacts were made by soldiers during lulls in the fighting, while recuperating from war wounds or when interred in prisoner-of-war camps.

The activity allowed men enduring unspeakable circumstances, a little respite from the tedium and hardship of war” she noted. “They introduced some semblance of beauty and humanity to the blighted world of the combat zone by depicting memories of home, of flowers and even hearts for their loved ones” she said. Of great cultural significance, the Quilts will go on display at the Cowra Regional Art Gallery in New South Wales, February 23 – April 28, 2019.

As Annette Gero points out – ‘… once termed “soldiers’ quilts” or “convalescent quilts”, the pieced textiles in this exhibition are associated with World War I and World War II as well as conflicts in the late eighteenth and nineteenth centuries. 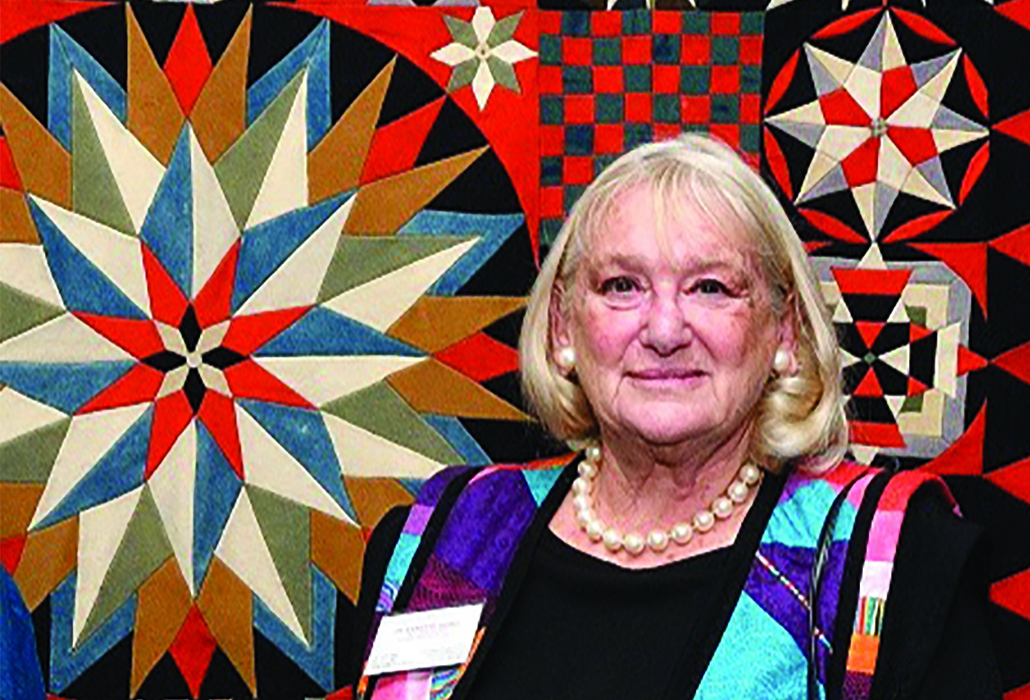 Annette Gero at the “War and Pieced” exhibition opening at the American Folk Art Museum in New York, NY on September 5, 2017. (Detail of a Photo by Stephen Smith/ArtZealous)

In a talk at Cowra Civic Centre Theatrette on Saturday February 23, 2019, Annette Gero will discuss the Quilts in this exhibition and how she found them and the stories she has been able to unravel about them.

One work from Vienna, featured on the cover of her book Wartime Quilts, is entitled the Battle of Mohacs, which took place in 1687. As Dr Gero tells us, this extraordinary example of intarsia took some thirty-years to make. The words “uber der arbeit erblindet’ inscribed on the bottom right hand corner says Annette, informs us the maker was visually impaired The work certainly has a heroic feel, its format reminding me of the remains of a great mosaic from antiquity. 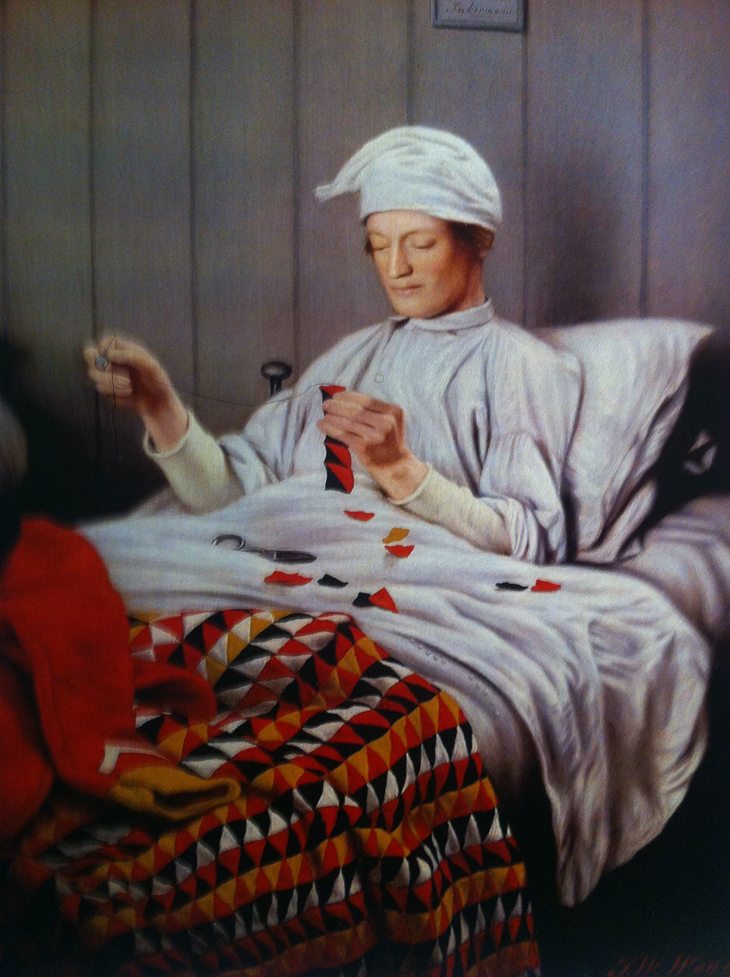 A Quilt is traditionally a covering pieced together from scraps of fabric in a patchwork pattern, which is then joined either by needle and thread or ties to make a useful basis for a new beginning.

The main design rich and colourful top layer covers a middle insulating layer, with finally a backing layer made of a woven material that is strong and serviceable.

The trio of textiles is brought together using different applique techniques, which when completed give the finished object great strength.

Its primary purpose for hundreds of years has been to provide warmth.

However, in many cases it has also become of great historical significance, reflecting our social and cultural development. There are only about 100 quilts made from military fabrics known in the world and their patterns are visually extraordinary. Many war-related quilts exist in Australia, the earliest from the Napoleonic wars of 1803, which came here with Prussian (German) settlers during the 1850s. Settling in South Australia and Queensland, they helped start our wine industry. Many of their ancestors fought in the Napoleonic wars and their grandparents made quilts from their military uniforms while in prison, after being captured by the French, meaning they became treasured family heirlooms.

Another endearing aspect of the construction of a Quilt has been conversation; for often in times of trouble and difficulty, making one has brought people from all sorts of backgrounds and skills together to complete the task ensuring the historical aspect is both diverse and rich. Each work in this display was chosen to reflect the wit, the charm, the gallantry and the love of the exotic. Some depict such delightful scenes as little boys flying kites. There are also extraordinary visual geometric masterpieces made during the Crimean War and during the Wars with the British Empire in India. Many of the Quilts made World War I (1914-18) and World War II (1939-1945) were the work of women, endeavouring to keep their children and men folk at the front warm. Some were also made by men in prisoner of war camps, where they often did not live to tell their tale. 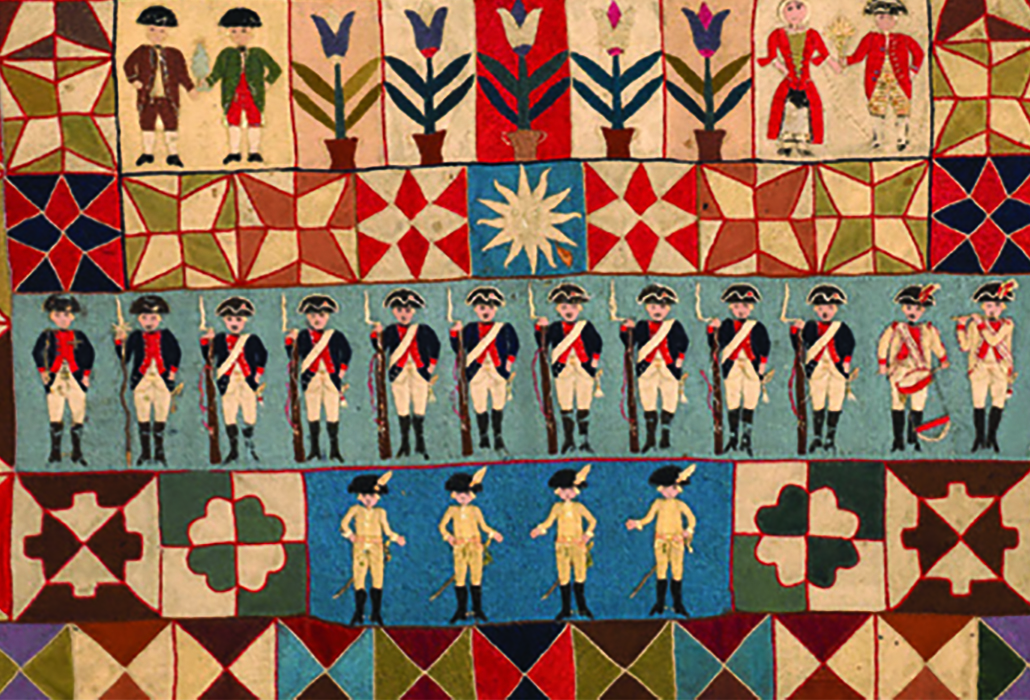 Their stories are told through the dedication to the work at hand, allowing us to know about their many sacrifices big and small. 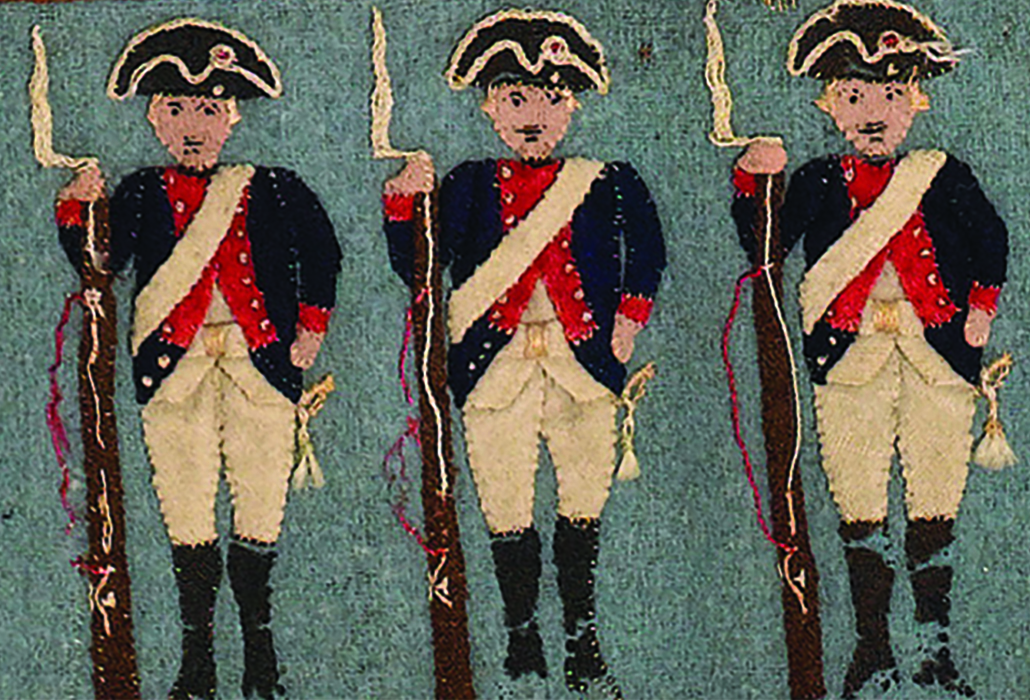 The Annette Gero Collection of Quilts from Military Fabrics

Marc Fitoussi, Folies Bergére with Isabelle Huppert is a contemplative portrait of a country landscape and marriage in need of renaissance, brilliantly achieved