An exploration of nature, especially the transcultural symbol ‘the tree of life’ motif, is an objective of the latest exhibition to go on show of the much acclaimed artist Kathryn Brimblecombe-Fox. It will be held in the Graydon Gallery at New Farm in Brisbane commencing on April 17th 2012. The Tree of Life represents the connection between our world and the paradise to come. We could say it is a microcosm of the macrocosm, a small complete expression of the vastness of nature and in a place where it is assumed that the visitor views it with an educated mind and eye. As a religious symbol the Tree of Life predates both Islam and Christianity. It also often takes on the form of a weeping willow tree, which is symbolic of sorrow and found growing alongside rivers. This enables it to feed from the same source of all life as humankind, water.

Re examining a woman, as representing mother nature, is a well-loved theme in Kathryn’s work, which is as old as time itself and an aspect of many creeds and cultures. It is topical because it addresses current environmental and sustainability issues. Also it establishes the age old idea of the relationship between humans as signifying the microcosm, to the rest of the painting and to the world as a whole, the macrocosm. As always Kathryn is vitally interested in exploring what is at the source and essence of life itself, whether it is in perspective, at a distance, or as it relates to the environment, the cultivation of beauty and much, much more. Her images transcend both time and space, involving the viewer in an often unsettling exploration of self, while exploring what is both before them, and beyond. 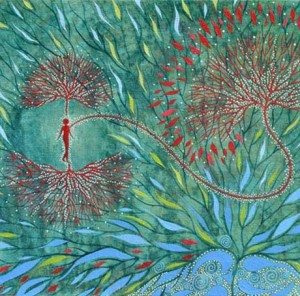 Beauty is a focus, not of the superficial kind, but of the deep and meaningful. She doesn’t confuse people’s perceptions of what beauty is, but rather invites them to seek it out.  In the context of her show, Quiver means to tremble, possibly at the difference between the ‘reality’ of what Kathryn believes she is conveying and the ‘actuality’ of the finished product the viewer is, in many ways, asked to appraise. And everyone will see it differently. What we may perceive however as one person’s reality, in actuality is often very different and vice versa. Humans tend to transcend the rational categories others seek to put them in. 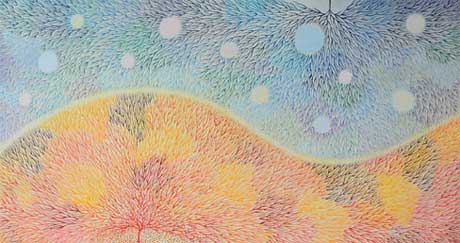 Let’s take ‘celebrity status’, because it is something Kathryn talks about on her blog. People gain celebrity status for many reasons, which can be good or bad, even both.

Celebrity status however is often not of the person’s choosing, but rather something imposed.

This can happen by the curiosity of a few people at first, then the greater public will come on board motivated and manipulated by clever, imaginative and innovative marketing and promotion techniques . The next phase is added by the media sensing a story that will help pay their wages and keep their bosses happy.

Then there are those individuals who light the fire and keep the flame burning because they are endeavouring to escape the actuality of their own lives by focusing attention on what they believe is the reality of someone else’s life. In the end what the celebrity in both actuality and reality represents is someone’s else’s personal hopes and dreams and the life they live is without a doubt very different to what is imagined.

During the Renaissance in Italy the focus on humankind uniquely combined body and soul, matter and intellect, animal and angel. A human was perceived as neither terrestrial nor super-terrestrial, but a dynamic combination of the two.

As noted by Nicholas of Cusa: ‘human nature is that [nature] which, though created a little lower than the angels, is elevated above all works of God; it enfolds intellectual and sensible nature and encloses all things within itself, so that ancients were right in calling it a microcosm, or a small world’.

The focus on contemporary art in Australia is very strong at the moment. The recent re-opening of the Contemporary Art Museum at Sydney after much renovation and additions will help the cause of those seeking to revitalize the Australian art scene.

The Art Gallery of NSW post its famous Director Edmund Capon, is also seeking to return Australian art to prominence with a grand opening of a new display of its Australian collection in May. An important aspect, the development of abstraction in Australian art from colonial times to the contemporary age will be comprehensively told.

Kathryn Brimblecombe-Fox is a contemporary Australian artist, who once again with her exhibition Quiver, will reveal the intangibles that so often occlude the truth about light and life. Kathryn’s new publication For Everyone will also be available to purchase $27.95