“It’s important to enjoy life while you can” 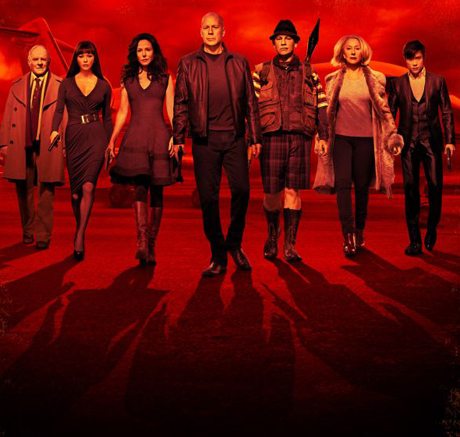 Retired Extremely Dangerous that sensational elite group of fav ex CIA agents Bruce Willis, John Malkovich, Helen Mirren, and Mary Louise Parker will be back having fantastic fun at the movies again soon in RED 2. They are busy proving they are still armed, still dangerous and, have still got it!

Also along for the ride of their lives this time is an additional upper crust trio Anthony Hopkins, Catherine Zeta Jones and Lee Byung-hun. The sequel is in response to the surprising success of first high octane action comedy RED, which aired in 2011 and surpassed all its producer’s expectations.

This simply wonderful group of aging actors were brought together first in 2010 to offer us all an opportunity to be voyeurs on a very stylish romp through the fantasy world of spooks and spies. For the over fifties RED 1 was a return to the world of the ‘cold war’ novels that they all cut their adult teeth on, or the sensational world of Saturday afternoon serials, where they imagined themselves fighting the forces of evil alongside their heroes. The terrific trio Bruce Willis, John Malkovich and Helen Mirren have become Hollywood royalty over the past decade or so. They are equally respectable, eccentric and delightful again in RED 2, as they get to let their hair down (the boys don’t have much) one more time.

It’s easy to see why most actors in Hollywood want to play alongside Bruce Willis. He’s achieved such a great deal since his wisecracking Moonlighting days on television. How could anyone who was around at the time ever forget the wonderful Taming of the Shrew episodes. His relaxed lazy acting style, with its added twists of comedic delight, have always been totally engaging.

The scene in RED 1 where he stepped graciously gun in hand from a car as it blasted away from him was surely at the very essence of ‘cool’.

John Malkovich is eccentric, expansive and always excellent. From his role in the blind lodger in Places in the Heart (1984), which earned him an Academy Award Nomination for best supporting actor to the  The Killing Fields (1984) and The Glass Menagerie (1987) he has earned his great reputation equally for eccentricity and classic cinematic achievement. His laconic role as the dark and very dangerous Vicomte de Valmont in the Hollywood version of the French classic Le Liaisons dangereuses (Dangerous Liaisons) was a highlight for many, of what has been this great actor’s interesting career. His ability to project the subtle intricacies of Valmont’s characterization was entirely delicious and earned him many brownie points.

In his role in Red 1 it required Malkovich to take his character’s eccentricity to extreme limits. The scene where this laid back old guy fended off a very dangerous dame with a b&^%$#* big bazooka about to blow him away was sensational. Then there is the gun toting dame herself,  Helen Mirren, who made people yearn for retirement in RED 1. She describes herself as “being famous for being cool about not for being gorgeous”. The irony is the older she becomes, the more gorgeous she is. Her person is highlighted by a glow from within and she has always had a winning manner, whatever the role she is playing.

What a mentor she is for the lovely Mary-Louise Parker, who prefers quality over quantity and has certainly perfected her craft with offbeat roles such as this one. The story line is that they all used to be the CIA’s top secret agents but the secrets they know have just ensured that they have remained the Agency’s top targets despite being retired.

In both movies they must use all of their collective cunning, experience and teamwork to stay one step ahead of their deadly pursuers and adversaries if they want to stay alive. Bruce Willis reprising his role as Frank Moses, projects the undeniable charm of a man still at the top of his game.

His Die Hard movies made sure he became one of Hollywood’s favourite actors and his easy on screen style is captivating.

We will miss Morgan Freeman, who in Red 1 was calm, cool, authoritative, lending an air of joie de vivre that was very engaging, at least before he was blasted away.

Then there was the scene stealing cameo appearance of that wonderful erstwhile crusty character Ernest Borgnine who at aged 93 enjoyed himself immensely as Henry the CIA records keeper. He so desperately wanted to appear again in the 2013 sequel, telling the producers that he wanted ‘to carry a gun this time’. Sadly he died before this new episode came to fruition.

In RED 2 retired extremely dangerous black-ops CIA agent Frank Moses, who is the number one target on MI6’s hit list hasn’t killed anyone in months, with guns, handcuffs and rocket launchers to hand he reunites his unlikely team of operatives. They have to track down a missing portable nuclear device and to succeed, as the story line goes, they’ll need to survive an army of relentless assassins, ruthless terrorists and power-crazed government officials, all eager to get their hands on the next-generation weapon. The mission takes Frank and his motley crew to Paris, London and Moscow where they are outgunned and outmanned while surrounded by fabulous scenery.

They have only their cunning wits, their old-school skills and each other to rely on, as they endeavour to save the world, hopefully staying alive during the process.

Sounds like a Really Extremely Delicious recipe for having fun.

The protagonists in RED 2 may be all retired but it doesn’t look as if any of our heroes will be sitting around playing cards in an old people’s home any time soon.

This is going to be another blast. Can’t wait !

For the last four years or so, when I have come to Sydney, my son has whisked me off to enjoy the experience of shopping at Fratelli Fresh, Waterloo, a clever creative Italian providore. It is sited inside a huge warehouse that is simply and stylishly fitted out to accommodate…