Dutch Masterpieces of art comprising some 78 exceptional works on loan from the Rijksmuseum  in Amsterdam, will be on show at the Art Gallery of NSW (AGNSW) in Sydney November 11, 2017 until February 18, 2018.

AGNSW director Dr Michael Brand said “… the Rijksmuseum is the jewel in the crown of the Netherlands’ cultural institutions and this exhibition offers visitors an exceptional opportunity to experience the Dutch masters, in particular Rembrandt and Vermeer, the two geniuses of Dutch art,” Brand said.

The exhibition Rembrandt and the Dutch Golden Age at AGNSW will showcase artists working throughout the seventeenth century. This was a time in Europe when the United Netherlands, tiny as it was, gradually grew to dominate world trade with its extensive commercial interests and colonies in Asia and America,

The Dutch were a people whose wealthy merchants provided a climate that allowed the bourgeoisie to dictate fashion, their royal rulers respecting their views. They were proud, self assured conservative, their dress and furnishings costly but sober and they were interested in both science and their art, which became among the most acclaimed in the world.

With the boom in the commercial and agricultural product range also came a re-structuring of people’s perceptions.

Viewing an enormous variety of products spread out in lavish abundance brought out new needs and desires, a change clearly evident in numerous paintings and series of paintings that focus on the subjects of the five senses.

Touch, Vision, Hearing, Taste and Smell were all powerful, evocative and seductive against a background of middle class morality.

The stimuli provided by the new range of luxury goods also triggered a compulsive urge in the viewer to enhance his own sensual pleasure and keep increasing his long-term needs.

As trade expanded and commerce prospered vast riches were amassed and a fresh generation, whose income came from investments, land and houses, also came to demand the luxuries French culture was so skilful at devising. The invention of the microscope at the beginning of the seventeenth century allowed the study of ever more minute phenomena invisible to the naked eye. This provided an opportunity for artists to portray closely observed detail in their work.

The court at The Hague became the main avenue along which French influence was brought to bear on Dutch culture from about 1625 until the end of the century. It was a modest court by comparison with others, the Dutch in the main remaining anti-aristocratic. 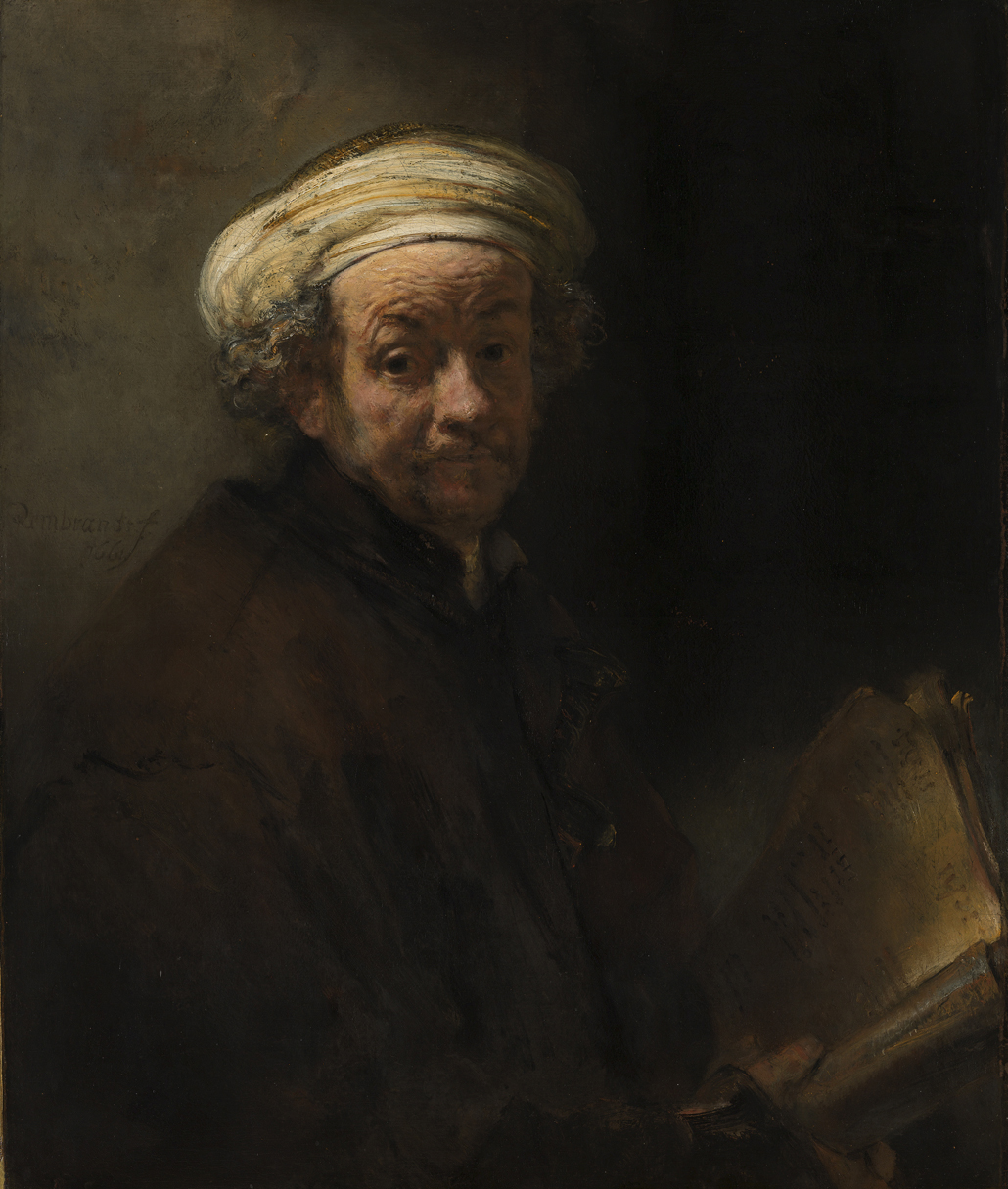 At the time Rembrandt van Rijn (1606 – 1669) was only one of many artists fighting to keep his head above water by earning money on the side as he struggled to be recognized in his own city in the midst of a huge artistic outpouring that saw foreign artists such as German and Swiss artist printmaker Hans Holbein, patronised by Dutch merchants.

Rembrandt virtually reinvented the media of portraiture, etchings and ink and wash drawings and the highest price paid to Rembrandt for a portrait in his lifetime was 500 guilders.

His self portraits are among the first pscychological studies in the history of art; he brought them all to an original technical mastery, a sense of drama created by a subtle use of chiaroscuro and his own overwhelming sense of humanity. Aelbert Cuyp, A senior merchant of the Dutch East India the fleet in the roads of Batavia’ 1640–60

During his lifetime 3000 guilders were paid in Amsterdam for a Holbein and so it became worthwhile to have a copy made with deliberate fraudulent intent, and many of these found their way into rival European galleries during the nineteenth century and were only detected as fake during the twentieth century.

Splendid portraits of merchant adventurers give us the impression through their artists that with the deft handling of brush and paint the sitter had been caught at a characteristic but fleeting moment in time.

Models never look tired or stale and often they appear as a casual glimpse of a sitter one that could never have been achieved without a deliberately calculated effect. AGNSW exhibition curator Peter Raissis said Jan Vermeer’s luminous Woman reading a letter (1663) and one of Rembrandt van Rijn’s greatest works, Self-portrait as the Apostle Paul (1661) are viewed by hundreds of thousands of visitors each year in the Rijksmuseum’s famed Gallery of Honour, and they are at the heart of the exhibition in Sydney.

“… Woman reading a letter is a perfect example of Vermeer’s work – painted when Vermeer was at the height of his powers and epitomising everything we love about his serene interior scenes,” Raisses added. “Visitors will see both these works in rare, close proximity, as well as an entire room dedicated to Rembrandt that will include seven oils and sixteen of Rembrandt’s finest etchings, in superb quality impressions, including biblical and secular subjects,” Raissis said. Jacob van Ruisdael, ‘Landscape with a waterfall’ c1668 oil on canvas, 142.5 x 196 cm Rijksmuseum, on loan from the City of Amsterdam (A van der Hoop Bequest)

Alongside masterpieces by Rembrandt and Johannes Vermeer (1632-1675) outstanding paintings by Jacob van Ruisdael (1628 – 1682), regarded as perhaps the greatest landscapist of the Golden Age will be on display.

Ruisdael made trees a subject of his paintings, imbuing them with forceful personalities, and his draftsman ship was meticulously precise, enriched by thick impasto, which added both depth and character to their foliage and trunks. Jan Davidsz de Heem (1606-1684) became renowned for his dynamic, colourful compositions of flowers by focusing on still life as his main subject. Transparency allowed that processes like glazing depends on the transfer of light through the layers of oil paint and a great example of glaze painting lies in his fabulous Vase of Flowers.

Still life painting served to immortalize the beauty of the flowers, so they could be admired especially in those periods of the year when they were not in bloom, so flowers were depicted as realistically as possible.

Such was the renown of Dutch horticulture in the seventeenth century, there was a demand throughout Europe for Dutch skilled gardeners, plants and horticultural treatises. Freed from Spanish domination in the early years of the century, the aspirations of the new Dutch republic that followed the great humanist thinkers are revealed in their preference for symmetrical composition. The still life tradition evolved in step with the genre of botanical illustration, paintings of flowers which were executed in water or body colour on paper or vellum.

Increased knowledge and the emergence of two new professions, those of the nurseryman and the floriculturist, who were dedicated to experimentation with new methods of cultivation and hybridization, led to a greater sensibility to the beauty of the many different species.

Artists were interested in the effects of light and colour on the objects, which changed considerably, according to the time of day. They emphasized the aspect of vanity and transitory nature of all things.

The flower gradually began to shed many of its symbolic associations and be admired for its pure visual pleasure and enthusiasm and this aspect would have far-reaching cultural and economic consequences, including Tulipomania. It was inconceivable to most a flower could be worth the price of a nice house in a good place on a canal but it was in 1635-1636 as Tulipomania appeared first in the Low Countries of Europe, which in those days meant the trading partners of The Netherlands, Belgium and Luxembourg.

From there it quickly spread to nearby England and France until unexpectedly and quite suddenly in 1637 the market collapsed due to overproduction and by 1642 prices had halved. Speculating on the fragility of a flower had its drawbacks.

On the whole, Dutch paintings of the seventeenth century reflect a community of solid, commonplace people, who were prepared to support a society in which corporate effort for the public good was rewarded by enjoying a booming economy.

Rembrandt and the Dutch Golden Age

You may also enjoy our videos

Dutch Simplicity, Sobriety & Sensuality Part 1 – The success of Dutch artists during the seventeenth century is contemporary with the expansion of the corporate system. Family life was also slowly gaining in importance, as attitudes toward children among the upper echelon of society changed.

Dutch Simplicity, Sobriety & Sensuality Part 2 – 17th century Dutch painters recorded the glory of the creation in plant and flower form and they imbued their works with a quality of reality that reflected a quintessentially Dutch conception of the world. Studios sprang up in the north in The Hague, Middelburg, Utrecht, and Delft and in the south