Scottish Born Robert Adam (1728 – 1792) returned to London from the Continent and his Grand Tour at the beginning of 1758 and gained membership to the Royal Society of Arts. He had this portrait painted of himself by George Willison around 1771, when he had just declared to all England that he had brought about a revolution in taste. Seated on a green damask covered chair of the type known as a Gainsborough chair, he is depicted holding a portfolio of drawings that he had made of the classical ruins he had viewed at Dalmatia when he was on his Grand Tour of the continent in 1757.

This is where one story reports; he was mistaken for a spy.

Robert Adam was just thirty when he commenced architectural practice at London. He spent the winter and spring acquainting himself with the state of architecture in England, and the tastes and requirements of potential clients before he started taking work on board. In 1761 he was appointed Architect of the King’s works, a post he held for some eight years. Design of the entablature and Britannic order for the gateway proposed for Carlton House by James Adam (1732-1794) and engraved by D. Cunego 1775 – Private Collection

His brother James returned from his Grand Tour and studies abroad in 1763 and together they established a practice in London that elevated the family name to greatness. They gradually influenced architecture and interiors all over Europe and America, for that of strict, pure classicism.

Their aim was to establish the Adam family firm as the “undisputed primate” of English architecture.

By 1772 they had achieved their goal. The partnership included Adam’s two partner brothers, their father in Edinburgh and employed more than three thousand men, which even by today’s standards is very substantial. For many the Adam Style will always be synonymous with the term Georgian, even though the thirty odd years spanning his career amount to only one quarter of the Georgian period (1714-1830)

Robert Adam produced a style that was like a refreshing cocktail, one that remained quintessentially British.

His clients amongst the eighteenth century aristocracy needed an architect who would render designs that would complement their ideas and new ideals.

The very rich political party known as the Whigs, whose foundations were in their great country houses, dominated the Georgian scene. Classical architecture with its wonderful sense of order and discipline exactly suited their vision for the future.

Robert and James’s eldest brother John was also an architect and partner in the most famous of the iron foundries, Carron & Co of Falkirk, who together with their great rivals Coalbrookdale, dominated the domestic cast iron, market during the second half of the eighteenth century.

He became supplier of ironwork to his brother Robert. William Adam the youngest brother looked after the financial and business dealings of the family and the patents for Adam cement.

Associated as he had been with Italian and French artists, and acquainted with Italian methods and workmen, Robert Adam approached the problems of domestic architecture and decoration in England from an entirely fresh standpoint.

He refused to be too academic, and his love of movement in architecture was one of his greatest strengths. Proportion remained the key to the whole house, no matter how modest or humble the home. The proportions, which governed the standard Georgian interior is a formulae whereby all of the elements of the house are directly related to each other and to the scale of the human figure. This proportion is pleasing not only to the senses, but also to the eye, and it is why Georgian style residences achieved such a following for two or more centuries.

Skirting, dado and cornice mouldings were carefully placed about the wall to correspond to the measurements of the vertical intervals of the classical column, thus the skirting corresponded to the base of the ancient orders, the dado to the pedestal, and the cornice to their entablature. Their complexity changed with the relative social significance of the rooms in which they were used. The extraordinary and quite spectacular State Bedroom at Harewood, containing the Diana and Minerva commode by Thomas Chippendale, the whole room is stunning ‘knock your socks off’ restoration of the past decade

Drawing rooms had more important mouldings and decoration, whereas rooms at the top of the house would have a much simpler treatment. This idea held true throughout the Georgian era and beyond.

Adam designed the interiors for Edwin Lascelles, Lord Harewood at his house in Leeds, Yorkshire.

It was a magnificent house, constructed by John Carr of York and set in one of the century’s finest landscapes by the equally legendary ‘Capability’ Brown. It was built from money obtained in the West Indies through the sugar trade.

And how sweet it is, filled with fine art, including paintings by masters of the Italian Renaissance, Family portraits by such luminaries as Sir Joshua Reynolds, George Romney and Thomas Gainsborough. 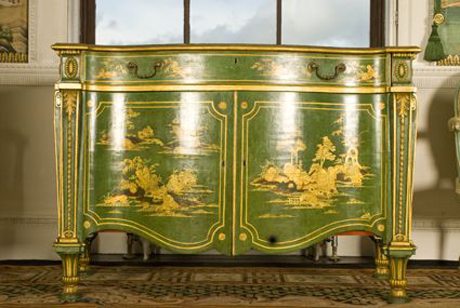 Robert Adam’s brillliant collaboration with renowned designer cabinetmaker Thomas Chippendale (1718-1779) began here in 1767 and continued until 1797. Chippendale himself died 18 years before the final commissions were completed and the work was passed to his son Thomas Chippendale the Younger.

The commission was worth 10,000 pounds, a staggering sum today by our own standards, nearly $1.5 million pounds. Chippendale and Adam had met at the prestigious Royal Society of Arts, which Adam had joined on his return from Italy. Thomas Chippendale regarded himself first and foremost as a tradesman. Like Adam, he was an enthusiastic promoter of his own talent and quite capable of designing anything at all to suit his client’s taste. The glorious long gallery was one of Robert Adam’s most magnificent achievements, with ceiling paintings by Biagio Rebecca covering an are a 76 feet long and 24 feet wide. A magnificent carpet in this room originally reflected the pattern on the ceiling, a hallmark of Adam interiors

Many of his pieces today remain in the house in the exact position in which they were placed. The Diana and Minerva commode in particular has achieved great fame. The Long Gallery at Harewood House crowns Adam’s work there and reveals Thomas Chippendale’s own hand in the carved timber curtain swags, which certainly trick the eye.

They are simulating festoons of taffeta with great gold tassels and trimming. This practical touch is a special aspect of English interiors. Adam knew the dust mite was the most damaging parasite for textiles, which would rot if not cleaned regularly. They were designed to obviate the corrosion of dust at a height he knew it was impossible for maids to clean. The walls of this gallery were designed to display the handsome series of Reynolds’s family portraits, and between the windows are splendid console tables with mirrors over them. The white marble tops on the consoles have coloured inlays and gold framings. The settees, chairs and the frames on the portraits by Reynolds are all to Adam designs. 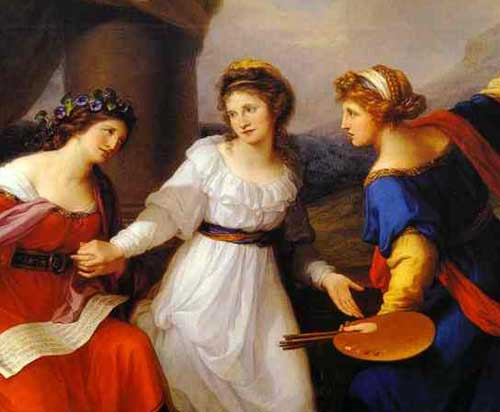 Angelica Kauffman self portrait, between the arts of music and painting

The ovals at the top of the mirrors were originally attributed to continental artist Angelica Kauffman who was resident in England during this period. The Harewood collection of pictures are complemented by an outstanding collection of Chinese porcelain. 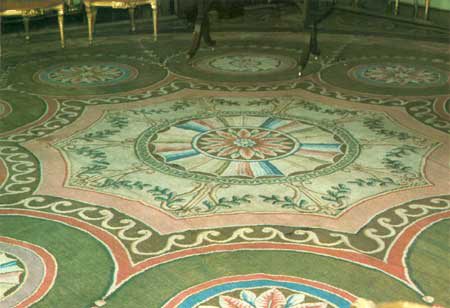 With the rediscovery of the ancient world a new and vibrant palette of colours were discovered amid the ruins of ancient Rome and Greece. Lilacs, bright blues from crushing lapis lazuli and greens derived from corroding copper, bright pinks, blacks and most characteristically terracotta red-browns had often been used in combination with black to create a colour scheme. Robert Adam’s work has been described as having an air of unceremonious good manners and unostentatious opulence, perfectly reflecting the civilized world of his patrons.

He used the newly discovered colours to create dazzling effects not relying on the washed out pastel hues often associated with the Adam style to day. Instead he took full advantage of the rich and vivid tones, which were now given academic sanction.

The neo-classical motifs he used included: the urn, the vase, wreaths, the drop, swags, garlands of flowers, acanthus leaves, anthemion, paterae and medallions, which were all enthusiastically taken up and copied by rival architects and designers both at home and on the continent, and most especially in America where the classical style became entrenched in the DNA of some cities. A lovely story attached to the restoration of the house tells us that during the 1840s a number of pieces of Chippendale were dismantled and put into storage. They remained untouched until the mid 1980s when tourism was picking up in England and a great many grand house owners began restoring them to reinvest in the future.

The pieces included the State Bed and several mirrors, which were stripped of their elaborate ornamentation. It required an incredible feat of detective work and craftsmanship to work out how they would have looked and been upholstered originally. But now these have all been restored and can be seen on the State Floor today.

Pursue the art of the home this winter by taking time out for rest and recreation, good for your well-being – cook eat drink and read – practice the art of life