Works from the estate of sculptor, teacher and the man known as ‘Australia’s greatest sculptor’ Robert Klippel (1920 – 2001), who had an interest in both the ‘unconscious and the intuitive’, will be presented by the Olsen Gallery as a focal point in this year’s Sydney Contemporary at Carriageworks September 7-10, 2017.

Tim Olsen, Director of Olsen Gallery commented…“Robert Klippel is widely regarded as having produced the greatest body of work by an Australian sculptor. He developed a diverse and personal language of sculptural forms over his long and celebrated career spanning six decades. We are excited to be able to offer a number of key works to the market for the first time.” Robert Klippel: Untitled (Study for sculpture) 1950 pen and coloured inks and watercolour, Inscriptioninscribed in blue ballpoint pen l.r.: Robert Klippel – 1950 / 1950, National Gallery of Victoria, Melbourne Presented through The Art Foundation of Victoria from the Bequest of Violet Dulieu, Founder Benefactor, 1997 © Andrew Klippel/Licensed by VISCOPY, Australia This digital record has been made available on NGV Collection Online through the generous support of the Joe White Bequest

A very humble man, Robert Klippel was entirely fascinated by form and colour. He focussed on small objects to create a big vision that today, as he does, stand tall in the history of Australian art.

An experienced sailor and veteran of naval service during World War II, Robert Klippel became a model maker for the Navy. He understood the symbolism of both flags and totems. “He was making models ever since he was five years old… he was fascinated by the forms of old war ships from WW1, and especially old clipper ships,” says his son Andrew, who refers to his father as a “miniaturist.”

“He was making models ever since he was five years old… he was fascinated by the forms of old war ships from WW1, and especially old clipper ships,” says his son Andrew, who refers to his father as a “miniaturist.” Australia’s isolation, our distance from the centres of political power and artistic activity meant those serious about art as a career in the twentieth century fled our shores and its constricting and often destructive attitudes.

Following the war Robert Klippel studied at the Slade School of Art in London before moving to moved to Paris for a year.

He came home to Sydney in 1950 and left for New York in 1957 where he stayed until 1963 when he finally returned to Sydney and stayed for the rest of his life. For decades Robert Klippel provided through his sculpture a continuous albeit silent commentary on our disposable society and how we tend to discard industry and embrace fantasy in our modern age.

His was a whole new visual language that you either loved or hated. He used old materials and old ideas to seek out and to establish new poetic ways of expressing contemporary modernity. While he had an interest in the Eastern philosophies of Buddhism, Hinduism, and Zen, his experiences and influences were very different to those of emerging artists today.

He was born into an Australia whose citizens were still British citizens and thought of England as home. He was not obsessed by landscape as many of his contemporaries, but an artist whose European training was always evident. 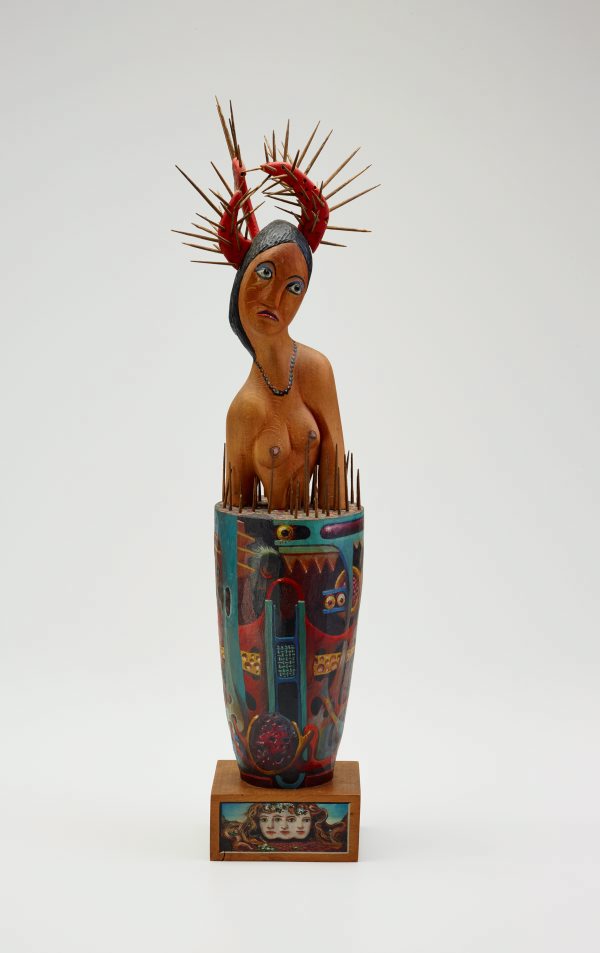 T.S.Eliot’s dystopian poems The Wasteland and The Hollow Men were considered during the 1940s as obligatory reading for budding Modernists.

The figure carved by Klippel was cast as a ‘pre-Raphaelite satire’ and Gleeson painted her. They produced her at a time when they were both working and living in London.

Their aim was ‘to suggest the vital inner structure of an apparently simple form, to suggest that by some kind of x-ray magic one could look through the opaque skin and see all that lay within.

However Klippel continued to struggle to gain acceptance in a world of art especially in Australia, sustaining himself by looking beyond what had gone before in a search to find new meaning.

Robert Klippel was indeed prolific, producing some 1,300 works and some 5,000 drawings in his lifetime. He brought sculpture into a contemporary realm, one where nature and machinery were seen to enjoy an inter-relationship.

He was invigorated by abstract expressionism producing ‘junk’ assemblages that challenge our conception of what sculpture is about and should be. They were made of materials such as wood, stone, plastic toy kits, wooden pattern parts, typewriter machinery, industrial piping and machine parts, as well as bronze, silver, oils, photography, collage and paper and more. In life the artistic aim of Robert Klippel was to always “express the workings of nature – in the broadest sense” which is reflected in the works presented by Olsen Gallery at Sydney Contemporary.

Only time will tell if they ring with resonance thousands of years later as have the works of the great sculptors who have gone before him.

Colour and Form: Works from the Estate of Robert Klippel

Spanish prints and drawings from the British Museum will be on show from the Renaissance to Goya at the Art Gallery NSW from 31st August to 24th November 2013.