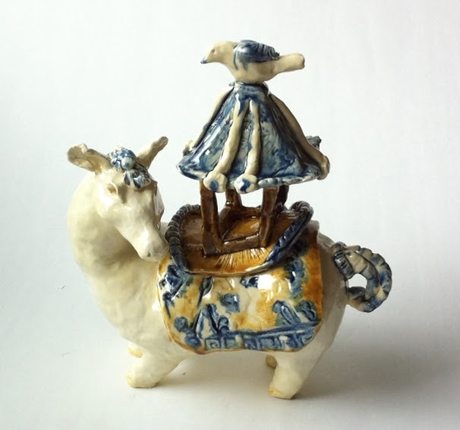 Clever creative ceramic works by artists of renown is always a feature of the Robin Gibson Gallery at Darlinghurst in Sydney. Robin Gibson relishes artists who both explore and passionately pursue curious and compelling imagery, which appeals to all ages, all cultures and sensibilities. Representing artists such as Stephen Bowers and Mark Thompson and Karen Choy, he celebrates the unique techniques they have each developed based on modern and contemporary concepts that influence the world of visual arts. Currently ceramicist Karen Choy has a wonderful display of works on view until October 22, showcasing the ‘year of the horse’.  They enchant, drawing on elements from the Chinese history of ceramic wares and their nation’s cultural development, to provide appealing snapshots of animal fables and folklore. They showcase stunning colours, shiny glazes and bear motifs gleaned from historical, floral and fauna sources and they bring both beauty and pleasure to the viewer. 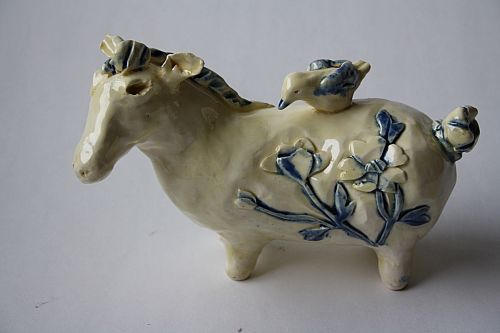 J’adore the white earthenware horse bearing aloft a canopied seat surmounted by a bird as well as the charming’little pony’, both of which are embellished with stylish blue accouterments, as a nod to the artist’s Chinese heritage. The lustrous metal cobalt was ground and used as blue colouring by ancient societies although the Chinese would perfect it. 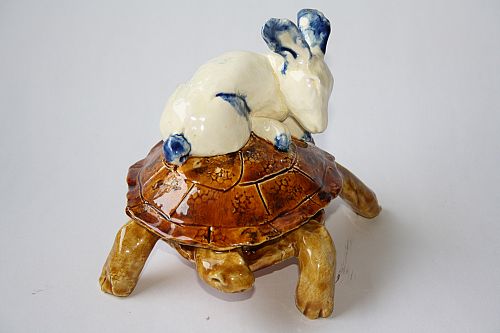 During the 9th century cobalt was excavated in the Near East, or modern day central Iran, and used on locally made tin glazed earthenwares. It was a very expensive commodity, twice the price of gold, which made its producers and the merchants who sold it very wealthy indeed. 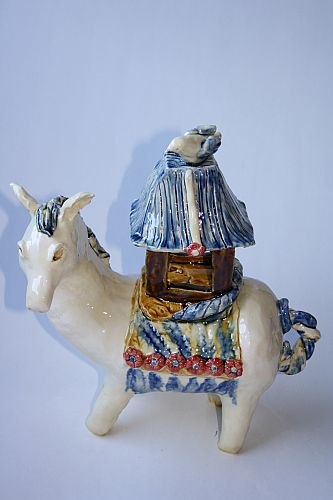 The Mongolian Horse has the added glamour of red and golden hues, while the all blue water pig bears a burgundy bird upon his back. 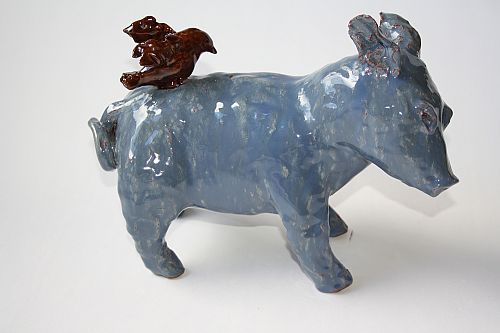 Karen Choy (b1981 – ) has been exhibiting at the Robin Gibson Gallery since she graduated National Art School in Sydney in 2005. She is clearly influenced by the Tang dynasty, whose benevolent monarchs, who reigned between 618 and 906, provided stable government enabling both cultural and artistic development. They motivated the growth of the ceramic industry at the time and expansion of their economy through trade. Wares were carried overland by merchant caravans, along centuries old silk trade routes and those shipped from the kilns at Jingdezhen gained a reputation in England and Europe for being the best. With thanks to the artist for using her imagery; be sure to see the Karen Choy Exhibition – Robin Gibson Gallery, Liverpool Street, Darlinghurst until 22nd October, 2015 Woven textiles were a measure for the status and wealth of a society from ancient times. At Arras in France, an important garrison town for the Roman Empire the entire population converted to Christianity in the fourth century. It became a centre for the wool industry and its wealth grew…