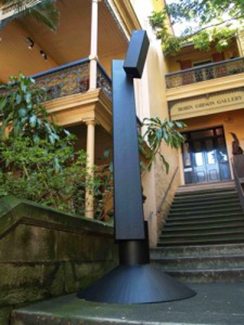 Opening night January 28, 2016, will see Robin Gibson kick start the new year at his well-known Robin Gibson Art Gallery in Darlinghurst, Sydney, embracing two unique art exhibitions. One by the award winning Australian born artist Margaret Early – Paris Triumphant and other Scenes, the other by ceramicist Karen Choy, which is appropriately called ‘ARK’.  They will both be on show until February 17, 2016. The wonderful works by Karen Choy are inspired by her Chinese Australian heritage. Her aim is to bring enjoyment and beauty to the viewer. Deeply influenced by works made during the sixth century Chinese Tang dynasty, she uses sancai or three colours together with lead glazes to reinterpret her Western cultural animal fables. Her imagery is truly delightful as she focuses on textures, colours and the sheen of the glazes while injecting plenty of good humour to ensure a fabulous outcome. Earthenwares and the more sophisticated stonewares were initially produced by many civilisations. Ceramics like so many other disciplines in the arts, cannot be viewed in isolation but in their relationship to other arts and the society of each age. Handling is the key to really gaining a less theoretical knowledge of the different styles of bodies. Seeing lots and lots or pieces has enormous value and how could you not fall in love with a group that has a bunny or a wombat on top! Some of Margaret Early’s works are seemingly inspired by the colourful history in the city and countryside of Paris, Munich, London, Amsterdam, Copenhagen and more. Born in the New England region of New South Wales, Australia Margaret Early says ‘I made three good choices in my life: the first was to choose a career in art; the second was to marry the Irish artist Micheal Farrell. The third was to choose to live in France in the village of my Huguenot ancestors’. Paris Triumphant is a highly detailed tapestry woven at Aubusson by legendary Pinton Freres Atelier . This detail of its imagery reminds me of a retro version of the style of scenes that originally appeared in the famous French fifteenth century illuminated book of hours Trés Riches Heures belonging to the Duc du Berry. Her Magna Carta reveals the thirteenth century signing of the landmark document at Runnymede in England, the one that took a huge step for mankind. The aim was to protect people against unlawful imprisonment by ensuring such rights as trial by jury and freedom from unlawful arrest were honoured. Margaret Early & Karen Choy On Show – Robin Gibson Gallery Open: Tuesday to Saturday 11am to 6pm, 278 Liverpool Street Darlinghurst, Sydney, Australia