Developing a relationship with the imagery of the world in which we live is part of a life long learning process. The National Gallery of Victoria (NGV) has given permission for some of the walls inside its iconic building to be used as a canvas for conversation about creativity, community and culture inspired by the works of South African-born artist Robin Rhode (b1976) as he presents his debut Australian solo exhibition commencing 17th May, 2013.

Achieving success on the scale he has might seem daunting at times for the young man whose work in chalk and charcoal first garnered attention as he drew directly onto the concrete walls and the asphalt streets of public places in the city of Johannesburg,

The largest and most controversial city in South Africa and seat of its Constitutional Court, Johannesburg has since emerging from its truly appalling period of apartheid, become a city of constant change.

Robin Rhode’s show will no doubt seem to many people to be in real contrast to the blockbuster winter masterpiece show, also on at the NGV featuring French painter Claude Monet’s Garden.  His lifestyle in an idyllic private paradise of his own making at Giverny in Normandy is viewed through misty dreamlike impressionistic images left to posterity.

Rhode has also had dreams, although he hijacked public spaces to better express his ideas and views on life in streetscapes that probably seem the polar opposite of Monet’s with their wonderful simplicity and cutting edge modernity. What they do share in common, at least according to ancient Greek philosopher Aristotle, is about the ‘aim of art  –  to represent not the outward appearance of things, but their inward significance’.

Deep thought and an inquiring mind has been at the forefront of Rhode’s works from the very beginning, as he set about exploring the complex history and landmark events taking place in his own nation during a very painful period of its political, social and cultural development.

He first addressed the concerns of his day through a combination of drawing and engaging performance in a playful way. He then expanded his horizons, refining this practice and introducing photographic sequences and digital animation to the mix.

Rhode’s street art works stood out because of his clarity of vision and his ability to take and then transform simple shapes into an effective cultural comment, or ensure that they were part of an ongoing narrative about the society he lived in, one he helped shape and influence opinion as it affected much needed change. 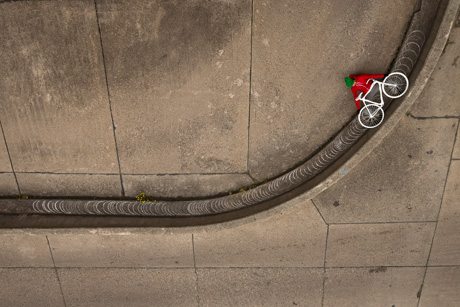 Today Robin Rhode’s works are in major museums around the word, and part of a cultural continuum. In many cities of the world Rhode’s style of artworks are considered a crime. They are classified as ‘graffiti art’, which historians can trace to places like the ancient Greek city of Ephesus in Turkey or Pompeii in Italy thousands of years ago.

In Australia officials in cities such as Brisbane would view his works as destructive not constructive. In some parts of Sydney and especially in Melbourne, there’s an entirely different approach. Melbourne City Council has set aside city lane ways and special public spaces designating them for community drawing, which is viewed as an aspect of art. Travel guides to street art are also available, reflecting a city in love with visual imagery.

Drawing is the single most accessible form of art available. It is a tool for thought, creating and cultural engagement for everyone. All you need is paper and a marker and it becomes the basis for many creative processes. Educationalists around the world agree drawing helps us to think, to invent, to express and to communicate our ideas regardless of age or ability. It’s an important tool in helping us to develop skills of perception, invention and communication

Rhode’s initiation into High school in South Africa brought his latent talent to the fore, as he was forced to draw and interact with his drawings. It was also all about learning how to face up to everyday challenges, how to deal with change, conflict and the possibility of failure. 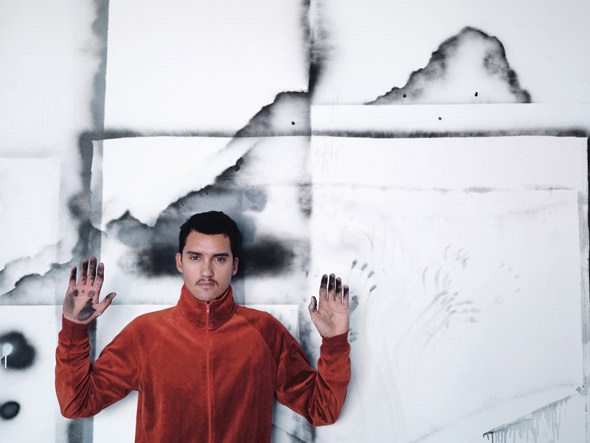 Robin Rhode in his Berlin studio

Robin Rhode has to date transformed multiple cityscapes into three-dimensional imaginary worlds except the one where he lives. He agreed in an interview in 2011 that having a Berlin studio gives him a context for analytical thinking while out in the street is where spontaneity rules.

This is no surprise because he is also an admirer of the ideals and aims of the Bauhaus (House of Building) movement in art (1919-1933), which during its brief history left an indelible mark on 20th century design.

Rhode’s drawings are also about spectators becoming participants, its most powerful aim. It means his art is, and remains, open to interpretation. Held in the presence of others drawing is an engaging way to articulate ideas through holding visual conversations about life and in an enjoyable way.

It can also be an important conduit, forming linking lines of communication between peoples and cultures. Two gallery spaces at the NGV International will be put aside to display Rhode’s work.

The first is for displaying what is considered some of the greatest works he has produced to date – a mix of descriptive drawing, street culture and passionate performance as seen through his own photography and animation.

The second space will be for interaction so that people of all ages and from all cultural traditions and all backgrounds, will be able to answer Robin Rhode’s ‘call of walls’ and participate in the creation of artwork on the walls of the NGV using coloured crayons. On the walls they can hold their own visual conversations about life, community and culture and illustrate just how important it is for them to be living or visiting Melbourne, Australia in 2013.

The considered aims of the artists of the Bauhaus founded in 1919 by German architect Walter Gropius (1883-1969) was to rescue all of the arts from the isolation in which each then apparently found itself, and to train future craftsmen, painters and sculptors to embark on collaborative projects. They wanted to create a true international style.

The term ‘form follows function’ was used to describe the importance of an item over its aesthetic beauty.

The use had to be the primary goal.

Beauty would follow and the basis for their aesthetic ideas would come from the use of materials such as glass, metal and concrete etc. The second was to elevate the status of craft to that traditionally enjoyed by what many people perceived as ‘fine arts’.

The third aim, once it was operational, was to establish constant contact with the leaders of the crafts and industries as it sought to free itself from public subsidy by selling its products and designs to the public at large and to industry.

Artists of the Bauhaus set standards for industrial design that still endure.

Drawing is a valuable life skill to acquire; it helps us to think, invent and communicate connecting generations. It has the ability to engage all members of the community with no gender, race, age or any other bias or prejudice acting as a barrier to participation.

For many teachers drawing is fundamental to the training of students in art, architecture and design as well as a key to understanding and knowledge.

Such an exhibition as this with an interactive component encourages everyone to expand their own horizons and break free of any boundaries that restrict their creativity, to share learning and their thoughts while they help to inspire others through both cultural and social engagement.

His first major museum solo show by Haus der Kunst, Munich, Germany, was in 2007. He has had major solo exhibitions at a number of important museums around the world, including the Hayward Gallery, London (2008); The Wexner Center for the Arts, Columbus, Ohio (2009), Los Angeles County Museum of Art, California (2010) and he has participated in notable group exhibitions including the 2012 Sydney Biennale. He is represented by the Lehmann Maupin Gallery, New York and Hong Kong.

Maggie Finch, Curator of Photography at the NGV observed, “Despite his current residence in Berlin, Rhode continues to work in, and be firmly engaged with his hometown in South Africa. He returns to the streets of Johannesburg to produce much of his work; streets that are marked with the complex histories of a city that has emerged from the period of institutional apartheid to become a vibrant, bustling yet dangerous place”. Art is the visible expression of something profound and invisible, in whatever medium is used, and whatever form it takes, it is shaped by the culture and age that produced it.

Robin Rhode’s show will bring people together in a nurturing environment, clearly demonstrating that drawing can = a positive outcome and become an important continuing life process that can enrich all our life experiences.

Watch a Video by Robin Rhode

Robin Rhode: The Call of Walls

Entry to this show is FREE

On Saturday May 18th you can help to celebrate Robin Rhode’s first solo exhibition in Australia and interact with works spanning photography, drawing and performance. Over the morning kids and families can work together in the creation of large-scale drawings.  Hear from the artist and curator in the afternoon and learn more about the processes behind Rhode’s witty, engaging and poetic works.

About the Show
Robin Rhode: The Call of Walls presents eleven of the artist’s recent photographic works and ten of his recent animations.

The exhibition is accompanied by an illustrated print publication, Robin Rhode: The Call of Walls, featuring Maggie Finch’s comprehensive essay outlining the artist’s background and vibrant oeuvre. Available from the NGV Shop in May 2013.

The opening weekend of The Call of Walls coincides with a day of special talks, tours and children’s activities on Saturday 18 May. A diverse public programs calendar, including a film series and sketching program, will continue throughout the duration of the exhibition. For the full program of events, visit ngv.vic.gov.au.

About the Artist Robin Rhode
Robin Rhode was born in Cape Town in 1976 and moved to Johannesburg as a young child. He studied Fine Art at Technikon Witwatersrand in Johannesburg, as well as production design briefly at the Association of Film and Dramatic Arts, and since 2000 has exhibited frequently in group and solo exhibitions both in South Africa and internationally.

The Joan and Peter Clemenger Trust generously support this exhibition.

Popular ad man Ruben Guthrie may need to stop drinking, for if he doesn’t he might find himself dead at a young age drowning in his stupidity and swimming pool.