Robyn Bauer Studio Gallery at Paddington in Brisbane has announced its next exhibition “Martin and the Animals” by naïve Strathpine artist Martin Edge, will be opened on the 5th April at 6pm by Mr Bruce Heiser, Director of Heiser Galleries. It will run until the 28th April. Martin’s appealing images reflect life in the city big enough to get lost in, but small enough to feel at home. His works can be sighted in and around the city, because he has decorated quite a number of Traffic Signal Boxes with his art.  They can be found in the Parliament House Canberra Collection, ACT.  Ken Done, Private Collection, Sydney.  Bruce Heiser, Private Collection, Brisbane.  St James College Collection, Brisbane, the Moreton Bay Regional Gallery and the Randa Collection at Melbourne. 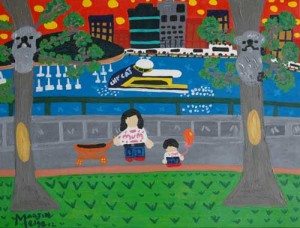 His colourful work celebrating Queensland’s 150th birthday of The City was shortlisted in the Q150 Traffic Signal Boxes Awards of 2009 when he also reached the finals of Australia’s oldest competition dedicated to spiritualism and religion – the Blake Prize. Robyn Bauer Studio Gallery is situated amongst the restaurants, cafes and boutiques of cosmopolitan Latrobe Terrace, Brisbane’s most exciting street for those interested in the original and the dynamic. It is only minutes from the city by bus or on foot so be sure to take in this very special event For further details contact Robyn Bauer Studio Gallery, 54 Latrobe Terrace Paddington, Queensland 4064 Ph 07 35116380