ROCKETMAN, in Cinemas May 30 in Australia, is distributed by Paramount Pictures. Brilliantly directed by Dexter Fletcher (Bohemian Rhapsody), it is a foot stomping, quite simply irresistible epic of biblical proportions, which is billed as a musical fantasy, although it is so much more.  It is about good times enjoyed in the pursuit of excellence and about those events, which challenge every particle of our being when the chips are down.

It is also about how, with only a little bit of luck and a liberal dash of je nais se quoi, we can be emboldened to not only pick ourselves up but also become the best we know how, as indeed did our hero of the moment, English singer, songwriter, pianist, producer and composer, Sir Elton Hercules John CBE.

Having seen Elton John perform live on stage throughout my life on so many occasions, for me watching this movie based on and inspired by his journey in life, was like going back in time to relive so much joy, happiness and sadness, which can be brought on by a love for meaningful music.

Especially when presented as stylishly as here – full of heartfelt emotion and affection, representing the stories and songs, which helped ensure my generation enjoyed living an art of life. 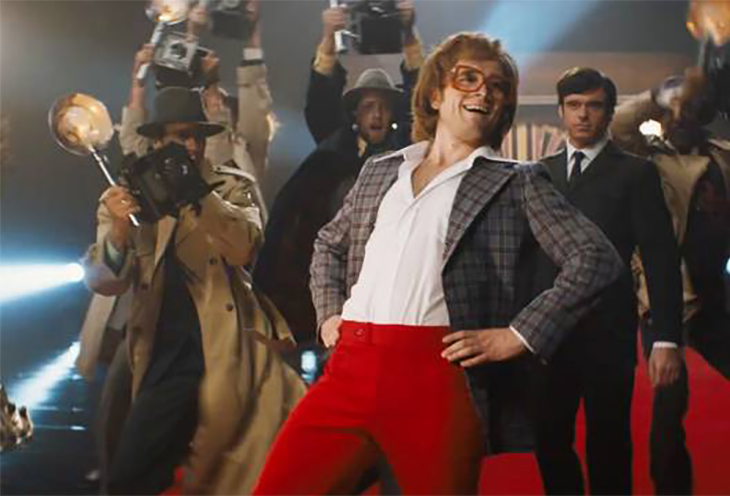 The audience is kept in full flight throughout Rocketman, witnessing the very human story of Reginald Dwight aka Elton John and his breakthrough years.

We watch with admiration as he met morphs from being at first a shy piano prodigy as a child, who feels isolated and unloved, until suddenly he blossoms into the international super popstar now beloved by many; a bespectacled Sir Elton John.

The two boys Matthew Illesley (young Reggie) and Kit Connor (older Reggie) who portray Reggie growing up are both outstanding in every way, dealing so well with the high octane emotional scenes they are thrust into, with great elan. 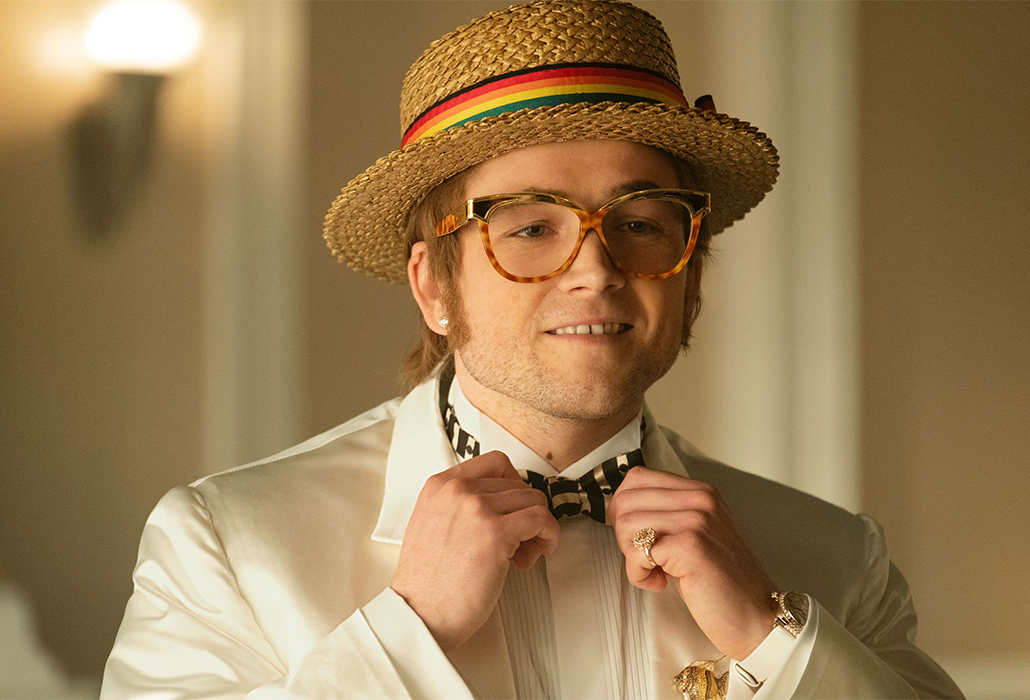 Elton John (Reggie Dwight) is portrayed as an adult by the very talented young British actor Taron Egerton (Eddie the Eagle, Kingsman and more). He delivers a masterful performance, not only singing all Elton John’s original songs successfully himself, but also brilliantly channeling the performance artist’s presence on stage as if he really is his alter ego.

Surrounded by the repressive attitudes of sixties society, Elton also unwittingly empowers others to manipulate his personal talents for their own gain, while taking advantage of deep down, the very kind person he really is at his core.

Advised to kill off the man he was born to be and to bring forth the man he seeks to become, is advice he finds hard to deal with at what is still, a very young age for being so wise. 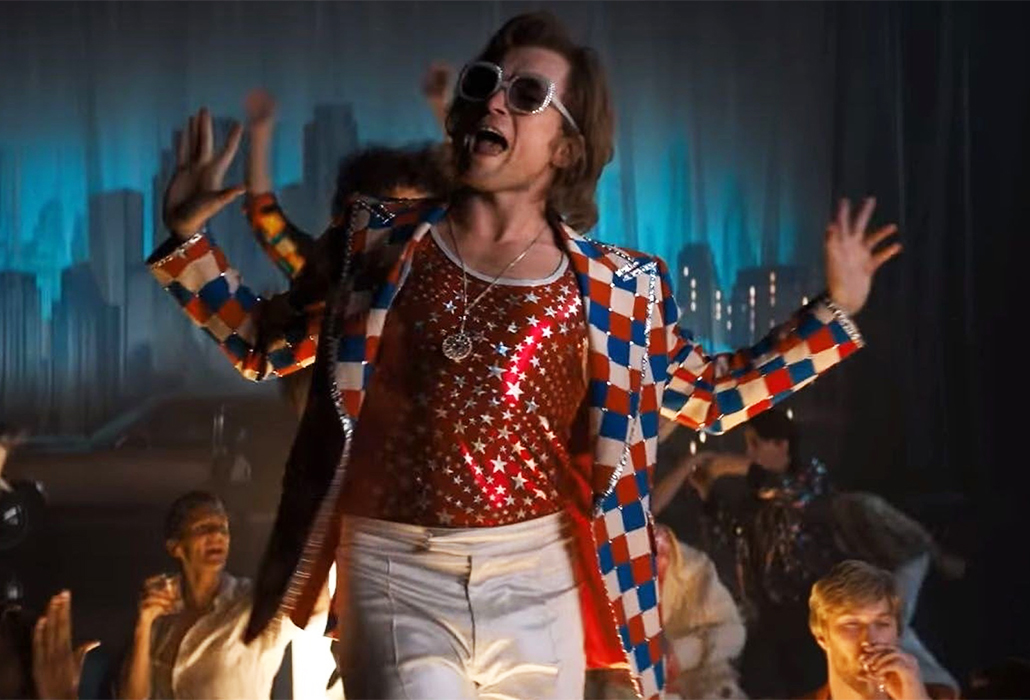 Written by Lee Hall, who also wrote the very appealing Billy Elliott, Rocketman has at its very essence, the sometimes funny, often very sad story of a young man struggling not only with his identity, but also with his sexuality and what that means for both he and his family.

His musical brilliance is showcased superbly by Taron Egerton, his tremendously likeable presence as Elton John, admired. The superstar’s human frailty is felt deeply, despite it being comedically conveyed, as Reggie met morphs from a ‘fat boy from Pinner’ to end up magically floating about in the air, buoyed up by the adulation and adoration of his peers, in his new disguise as a ‘Rocketman. 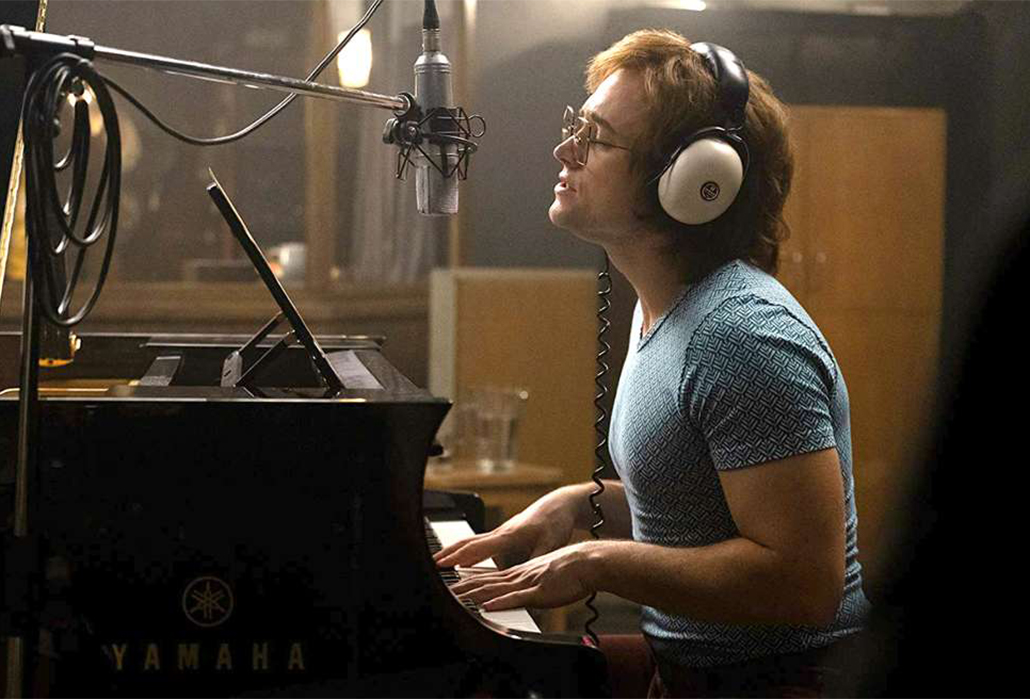 What an impressive talent Taron Egerton is as he transforms from teenager to young man brilliantly, performing at first the raucous rocking hit song Saturday Night’s Alright. Then there is the emotionally stirring Your Song, which gave Elton his first ever US Top Ten Hit, not forgetting the splendid Tiny Dancer or the title song itself, Rocketman.

Fans will be thrilled as many of their favourite songs are brought back to life in such an appealing way and I am sure, Elton John’s music will gain a whole new legion of fans. 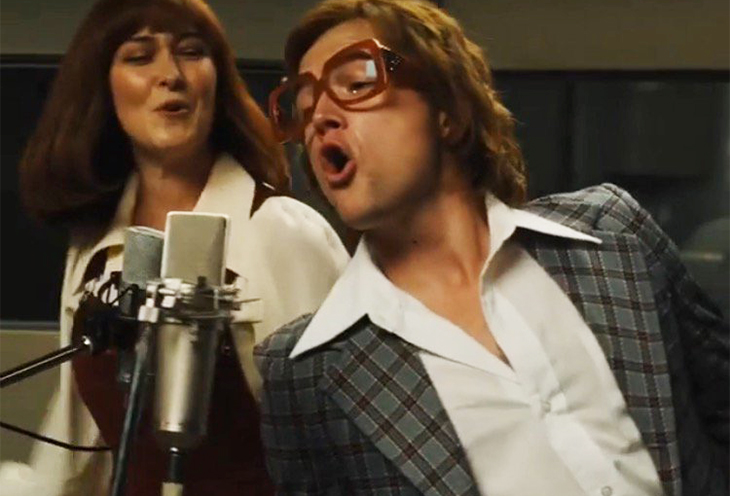 As I write my review I have been rocking out to Don’t Go Breaking My Heart, performed by Elton John and Kiki Dee, which won the 1976 Ivor Novello Award. It was one of my go-to songs when my three boys were all small, and seeing it re-enacted on screen reminded me of how it and other great popstar pieces at the time, helped to keep my spirits soaring while motivating me ever forward during hard or difficult times. 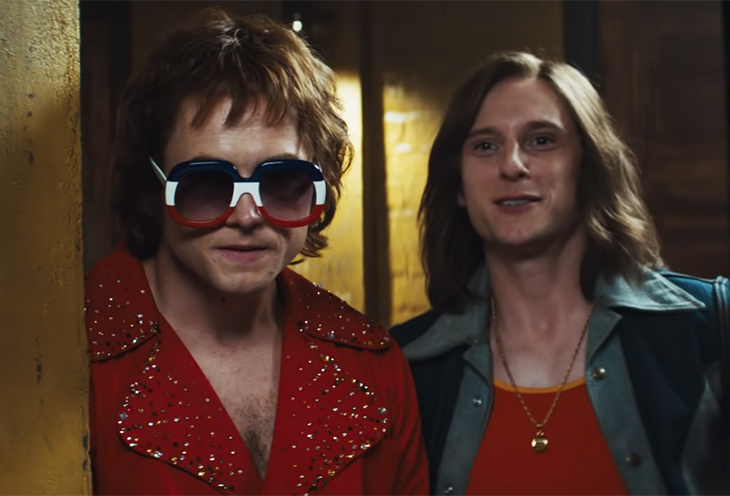 We discover how the only love Elton receives for a long time, is from the man who becomes his best mate and business partner for evermore, Bernie Taupin, who is played superbly by English actor Jamie Bell (Billy Elliot himself). Taupin’s wondrous lyrics are just like the man himself as portrayed by Bell, sensitive, superbly nuanced and completely compelling. 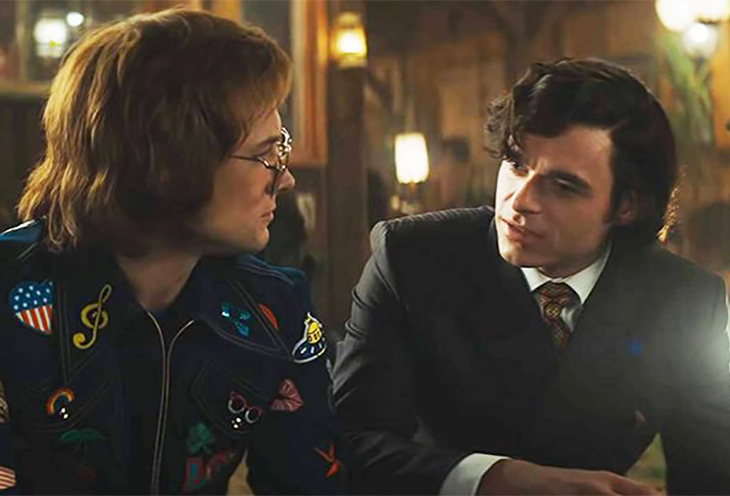 Richard Madden (GOT, Bodyguard) is well cast as the devilishly good looking Alan Reid who was Elton’s first love, as well as his true bastard of a manager in every sense of the word.  Reid ensures his client becomes reliant on drink and drugs because basically he’s due to receive 20% of the ‘stars’ earnings for ever more.

Not having a care for his charge or his well being, he keeps Elton on a terrifying tour schedule, which would break most people long before it does the man, who having grown up surviving the school of hard knocks, with only the aid of his Gran Ivy (Gemma Jones), is thankfully made of tougher stuff, although like everyone else, he has a breaking point. 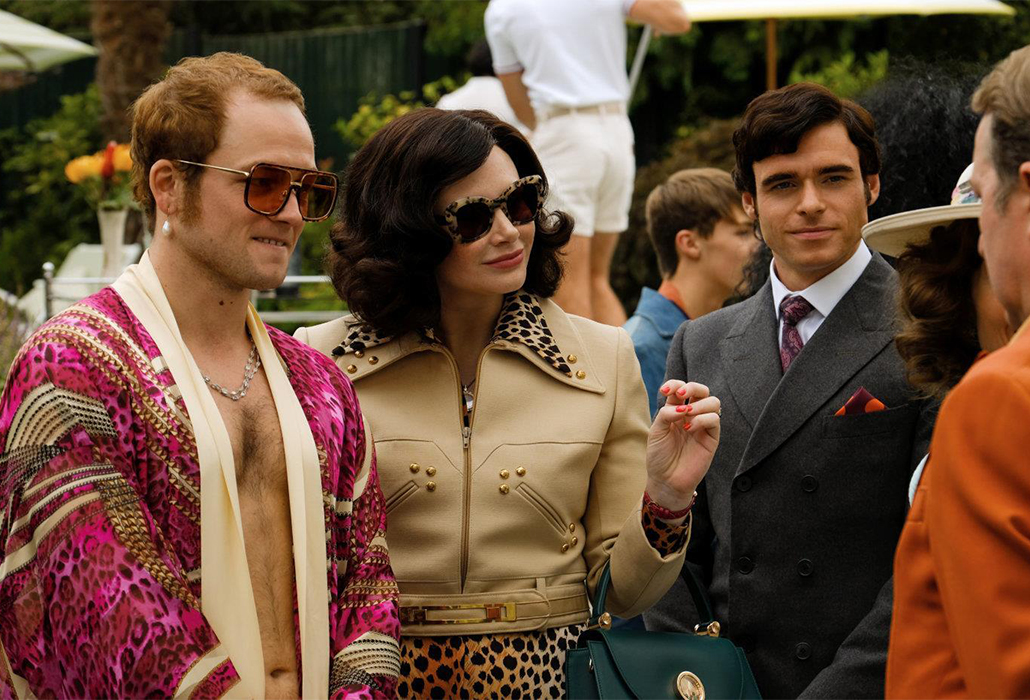 Bryce Dallas Howard plays Elton’s fairly shallow and heartless mother Sheila Farebrother, portraying her as a woman who lives a ‘surface’ life, unable to nurture her young son by giving him the emotional support he needs, or the guidance required to mature into the man he should become.

She and her husband Stanley (Steven Mackintosh), do not give their son an ounce of affection as a child. These two actors are both so convincing, we certainly feel Elton’s pain as they ensure he ends up in group therapy.

Can he turn the experience into a positive, not a negative? 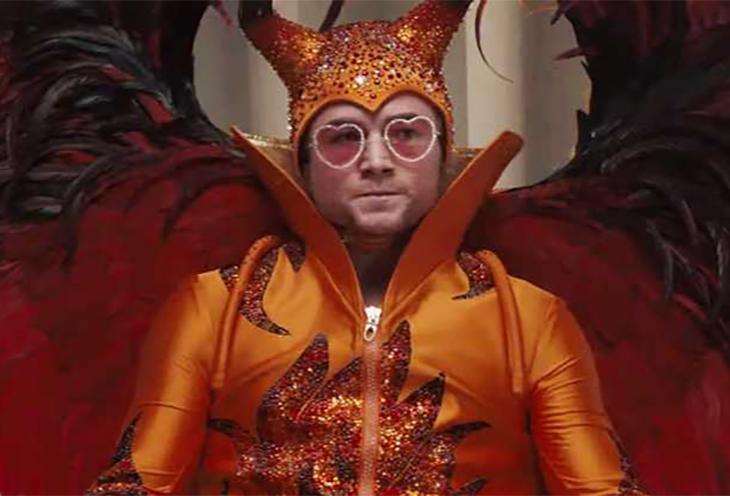 Taron Egerton as Elton John in Rocketman from Paramount Pictures.

Being in therapy for Elton is an agonizing affair, which is at the centre of the storytelling for Rocketman. It starts with him arriving for his first session in the most outrageous of all his costumes in the film, his orange birdman suit.

While it suggests he might like to fly away and wish it wouldn’t have to happen at all, it is only by peeling away the layers of unhappiness one feather, or Swarovski crystal at a time, that Elton will discover how to face the path ahead. 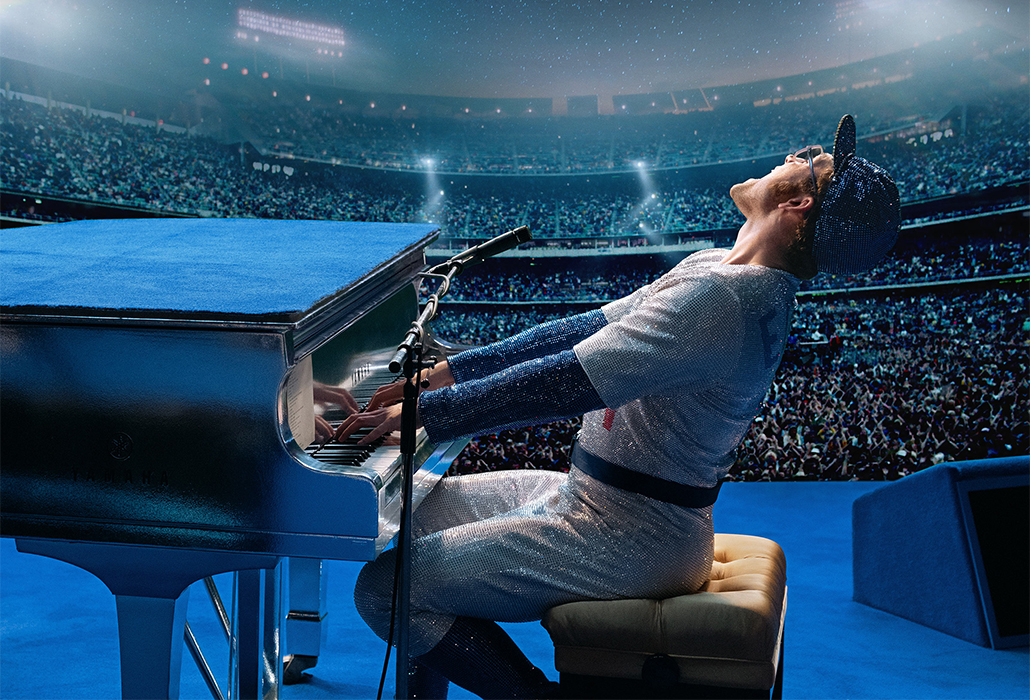 It’s an emotional journey until he is able to finally arrive at the place where he matures enough to understand that the strength to have a meaningful life must come from deep inside himself, not from those around him.

Once he knows himself and learns to love himself, well, then all else will flow forward, which it has during the 28 years since he walked out of the hospital whose staff helped him to save his life, as indeed they were meant to do. 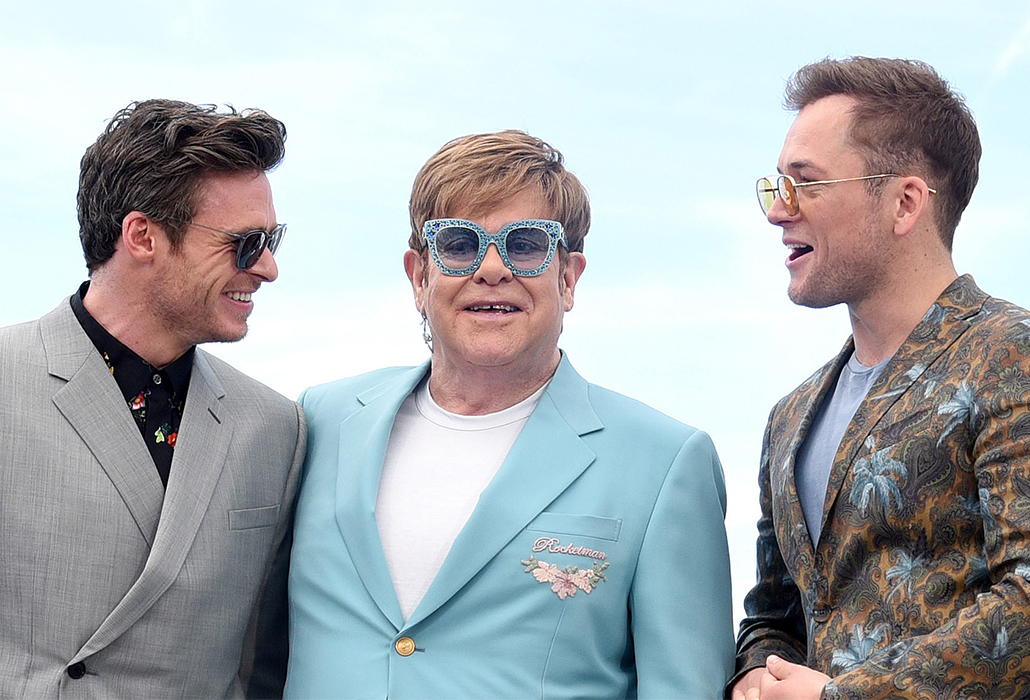 Attending the Melbourne premiere at Palace Cinema Como on Saturday 25th May, where the new Platinum Class experience was also unveiled, the audience also reacted by applauding as the movie ended.

Everything about Rocketman was emboldening and highly entertaining.  The mood in the room was high spirits all around, following on from watching a moving, imaginative, rags to riches story with heart. 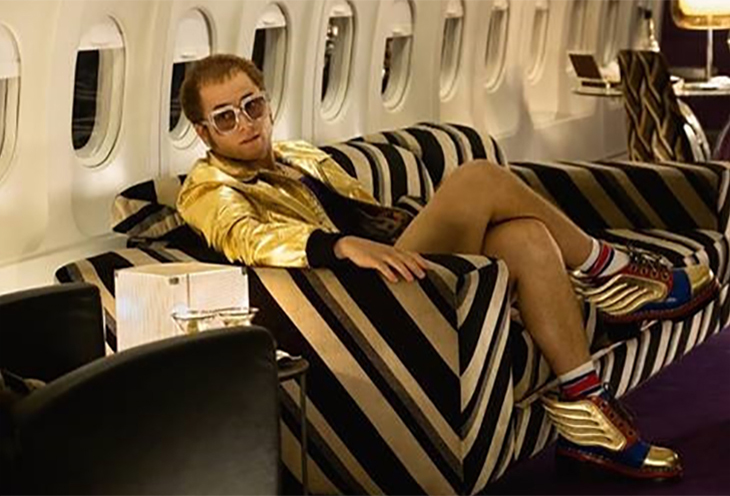 Taron Egerton as Elton John in Rocketman from Paramount Pictures.

The marvellous acting, outstanding singing, fabulous dancing, spectacular staging, outrageous costumes, including a stunning array of spectacles. Then there are the songs, the fabulous songs.  They ensured the idea of pathos; that inner place we are all drawn towards, attracted by life’s complexities and contradictions, was satisfied.

Rocketman made our hearts leap with joy when he and Bernie produce their first song… and then break along with Elton’s, all the way to the end. 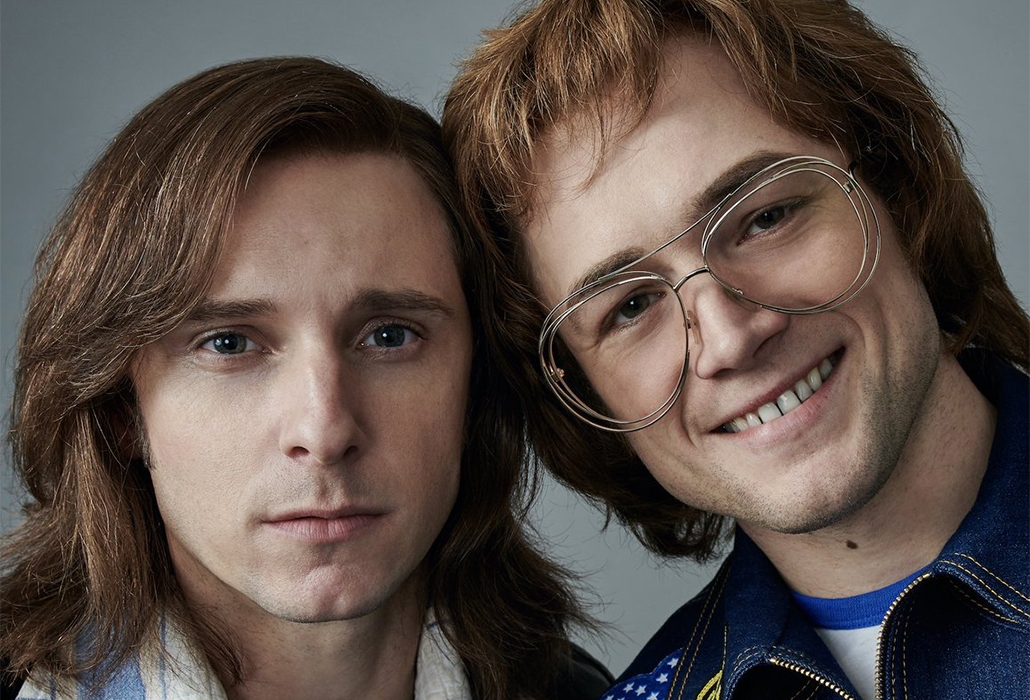 Taron Egerton as Elton John and Jamie Bell as Bernie Taupin in Rocketman from Paramount Pictures.

Finding out how to love himself for Elton was often tragic, but in the end, he triumphs gloriously, despite his flaws and imperfections, into the great and generous man today all his friends cherish.