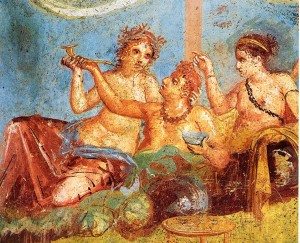 Every ancient culture attributed the origin of agriculture  to some beneficent deity. The Egyptians had Osiris, the Greeks, Ceres and so forth. Somewhere along the line however ‘man elevated his and her mind to associate sociability with food and gradually over a long period time, to also reflect his ‘civilised’ state. The pontiffs of ancient Rome, men of exquisite delicacy and matured taste, caused oysters to be served at every repast. This small piece of epicurism was not only expensive but it became a necessary devotional aspect of their love of good cheer. Oysters were a great luxury then as now and the ancient Greeks and Romans were remarkably fond of them. They became the gastronomic prelude to any supper, served raw and not opened until served at the table, by a slave (the person we would today call waiter). The greatest of all the Roman chefs Apicis esteemed oysters from the lake of Lucrinus the best, but also Brindes and Abydos. He he knew how to preserve them, fat, fresh and alive on their fatiguing journey from the sea to be served abundantly at a Roman feast. His most exquisite stew included them and, at Rome, they were served with seasoning mixed with the yolks of eggs, vinegar, garum, oil, wine and a little honey. They were then preserved in a vase smeared with pitch, washed with vinegar and hermetically closed. 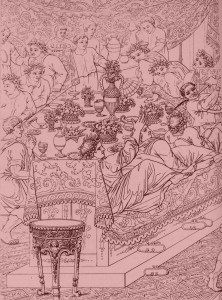 The Bibliotheca Alexandrina, or new library of Alexandria was inspired by the enormous repository of knowledge lost when the ancient library caught on fire during a battle with Roman General Julius Caesar and burned to the ground. This all-new library of Alexandria opened its physical doors to the world in 2002. Since then it has become an important focal point for the sharing of knowledge as a practical means of aiding an understanding between world cultures.