Before the advent of photography, etchers and printmakers were producing images remarkable for their accuracy of detail and startlingly beautiful clarity.

These invaluable records of people and places from times gone by don’t often make it onto a gallery’s exhibition list.

The State Library of Victoria in partnership with the University Library, University of Melbourne remedied this by mounting an exhibition in 2014 devoted to one of the most important and influential printmakers of the eighteenth century, Giovanni Battista Piranesi, 1720–78.

Rome: Piranesi’s Vision, was perhaps the most comprehensive exhibition of Piranesi’s work ever to be seen in Australia, curated by Dr. Colin Holden, a former Redmond Barry fellow.

There were over a 100 works (some rare) in a show that highlighted the architectural styles of renowned escellence at Rome with a focus on Piranesi’s exquisite prints from his book: Vedute di Roma (Views of Rome). Images of churches, grand palaces and monumental ruins, their magnificence often encroached upon by slum dwellings, transported the viewer to an 18th-century Rome streetscape, the architectural detail of his prints so engrossingly real you could believe you were there.

Piranesi was interested in the decay of ancient Roman buildings.

As a consequence his engravings were often of locations that, with the advent of ‘The Grand Tour’ a cultural experience for the wealthy youth of England and Europe in the eighteenth and early nineteenth century, became the equivalent of today’s  tourist hot-spots. Human figures, small in comparison, provided the gravitational pull of these engravings, featuring large edifices, surrounded by puny by-standers are stunning in their complexity and generate a feeling of impending disaster.

They were all about the impermanency of human endeavour and mankind generally which I discovered on my journey; maybe that’s the effect Piranesi intended.

What I particularly liked was the opportunity to see in detail the mastery of first and second century Roman builders. In some prints, building facades and interior walls are in disrepair or missing, the bones of building construction laid bare.

Piranesi had recorded the masonry and woodwork of early tradesmen – the work almost unbelievably skilled and intricate in execution – quite amazing.

Piranesi, based in Rome, saw himself first and foremost as an architect and created etchings of archaeological subjects that became an inspiration for artists and architects across Europe.

The statement made by Piranesi: “I need to produce great ideas, and I believe that if I were commissioned to design a new universe, I would be mad enough to undertake it.”  was recorded by an early biographer, and is typical of a man whose etchings of 18th century Rome are characterised by fantastical imagery of ancient architectural sites, beautiful and dreamlike in their conception.

Born near Mestre on the Venetian mainland, Piranesi was the son of a stonemason and master builder and was instructed in structural and hydraulic engineering by an uncle who was employed by the Venetian waterworks.

He also studied architecture and his brother, a Carthusian monk, introduced him to the history and achievements of the ancient Romans.

Studying stage design, Piranesi gained a thorough understanding of perspective construction and design. While attracted to the profession of architecture, he was not awarded many commissions.

His training in engineering, architectural perspection, drawing and stage design was not wasted though; they became stepping stones to a career which gave him fame then and now as a major influence on the printmaking profession. He travelled to Rome in 1740 to observe and study the remains of the ancient city. Within a year Piranesi produced etched views of Rome, and in 1743 he created his first major publication, the Prima Parte di Architettura.

Piranesi returned to his native city of Venice twice in the mid-1740s. The series of labyrinthine prison interiors, the Carceri, were created soon after Piranesi began working in Venice’s lively printmaking scene. In the Carceri series, Piranesi explored the art of perspective and spatial illusion, creating etchings that show both the State prison’s beautiful architectural interiors and images of the sadistic horrifying punishment that was perpetrated within the walls.

If you liked the notion of sublime terror then there were works that concentrated on the beauty and horror what is known as Piranesi’s Carceri series.

Piranesi left Venice to settle in Rome, where he remained for the rest of his life. These collections were created from both observation and imaginative interpretations of ruins original construction and by using magnified scale and perspective distortion, he produced complex works notable for their architectural detail and heightened sense of reality.

They dominated the market ensuring Piranesi’s place in the history of etching, engraving and printmaking.

The knowledge of ancient building methods demonstrated by Piranesi’s archaeological prints led to him becoming an acknowledged antiquarian—his Antichità Romane of 1756 won him election to the Society of Antiquarians of London.

Etching also provided Piranesi with a livelihood, allowing him to turn one of his favorite activities, drawing the ancient and modern buildings of Rome, into a lucrative source of income. 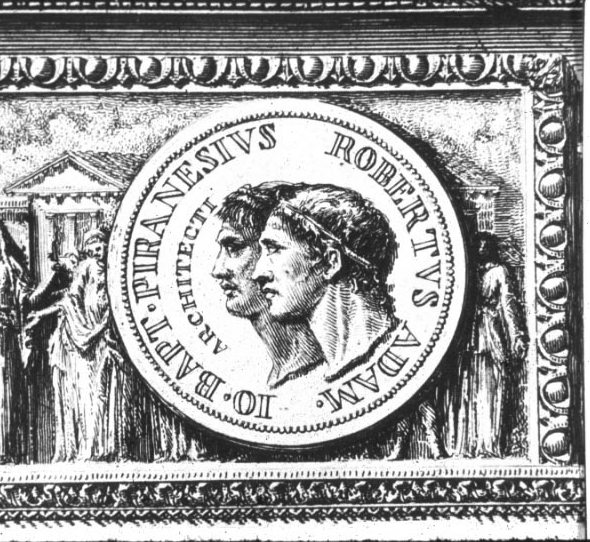 Drawing on influences from Etruscan, Greek, Roman, and even Rococo styles, Piranesi was convinced that an architect or designer was free to draw on models from every time and place as an inspiration for their own creations.

His friendship and influence on Scottish born English neoclassical architect Robert Adam when on his grand tour, would be profound. Piranesi’s etchings of his eclectic mantelpiece and furniture designs were widely distributed in Europe, influencing decorative trends. Ancient ceramic fragments, discovered in excavations were incorporated into mantelpieces, lamps and candelabra bases and a new business for Piranesi.

His work ethic and love of Ancient Rome never flagging, Piranesi reportedly said on the day of his death: ‘Repose is unworthy of a citizen of Rome’. He spent the hours before his death amongst his drawing and copperplates.

Piranesi was truly a man for all times and creative mediums.