A view of the elusive Lake George nearby to Australia’s capital city, Canberra.

New Zealand born Australian sculptor Rosalie Gascoigne (1917 – 1999) was drawn to the landscape of Lake George that lies between Canberra and Goulburn.

The impact of this countryside was indelibly printed on Rosalie Gascoigne’s ten artworks.

She masterfully imbued her response to the rural landscape by lovingly and patiently handling her treasured found materials until they formed structures that abounded in tonal nuances and evoked a sense of order.

The stillness of her artworks merged contemplation and poetic imagery into subtle and elegant assemblages. She has rejoiced in the landscape through patterning moments of visual discovery and linking old and worn materials with poignant memories. The exhibition made me recall my own reactions to the land on my many visits to Canberra as I drove around Lake George.

The core of the endless country with its weathered colour variations and changing appearance is fashioned in abstraction from saffron thistle sticks in Place to Walk Around (1981).

Each stick has aged to produce a range of earthy faded colour differences.

The shades of the grid shifted and changed as the viewer walked the boundaries of the artwork.

The illusive effects of diversity across the land and water were succinctly captured in the ease of the criss-cross arrangements and the loose and rhythmical character of the materials.

Water, sky and land moved as one.

Rosalie Gascoigne’s first foray into creativity was her work with Ikebana, a Japanese form of floral arrangement.

Although she moved well beyond this form of expression it cemented her understanding of the elements of design and the significance of emotional responses in the creative process.

This was especially palpable in A Place to Walk Around. 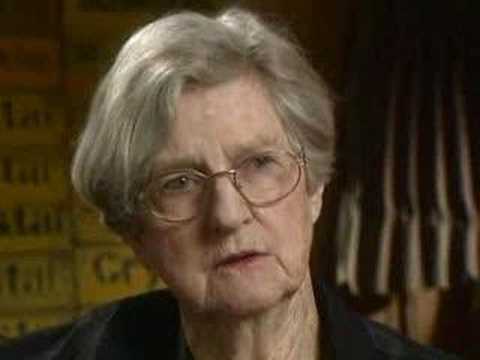 Ten years on in 1991 Rosalie Gascoigne (pictured) created Lambing from torn linoleum on board.

This abstract depiction of an almost jig-saw configuration of lamb’s fleeces scattered across the brown earth revealed a passion for the landscape and a refined understanding that evolved from her constant travels for materials.

In a conversation included in a catalogue for an earlier Rosalie Gascoigne exhibition Marie Hagerty reported “driving in the country was for her what drawing is for me. Liberating.”

The dull grey green of the linoleum flecked with black, the cross hatching lines of wheat colour and the weathered painted board combined effortlessly to define the topography of sheep country and the viewer could almost touch the encrusted soil beneath.

Lambing was full of life in the movement of the shapes as they frolicked but never collided.

The composition was playful and the tones changed in the three panels with the fall of light. The clarity of form and structure was eloquently illustrated in this work.

I felt a close alignment between the two assemblages Lambing and Sheep Weather Alert however the contrast lay in the movement in the first work and the silence in the second.

The animals appeared instinctive in their responses and their impressive sense of hearing caused some of the sheep to be crouching and seeking protection from the elements.

The flat monochrome diluted paint brushed over the outlines of the sheep intensified the fear of the moment. There was a sense of motionlessness that pervaded the beige, green beige, soft charcoal and pale lemon colours of the artwork.

The forms and colours created a harmony even though there was the confusion of fear and anticipation.

The misty haze of moonlight and jewels of silver moisture filtered through the subtle placement of muted colours and smoky light in Plain View 2 from 1994.

This work was sparse, pared back to reveal a certainty about the significance of a country weathered by time and the seasons, inspirational in the eyes of the beholder, Rosalie Gascoigne.

I thought it was a contemplative artwork that reaped glimpses and moments in time. Winds whispered and wheeled across the composition. It was conceptually visionary in its underlying austerity.

Plain View 2 revealed an internalization of the endless country, the power of isolation and the consolation and comfort of working and living in a familiar pastoral environment.

Three of the works were constructed from corrugated iron panels on wood.

In White Garden 1995 twelve panels cast moonlit shadows that shimmered and glowed on the earth, lighting the layers of time and the evolving surface of the land.

Tufts of pale lemon dry grass poked between the spindly curved shapes of the trees. The rolling folds of the corrugated iron gave rhythmical movement and sensuality to the configuration and the beauty inherit within the discarded objects.

Like Plain View 2, White Garden was etched with a palette of peppered greys that applied an intimacy and respectful reference to the scenery of the Lake George region.

The grid assemblage of sawn wood on plywood in Wood Clip 1995 expressed the land as a patchwork construction with varied and changing influences.

A second tier of wooden blocks intensified the aerial view of the landscape.

The earthy colours caressed the shapes, and textures of the wood built the enigmatic nature of the country. The patterning of the wood blocks in Wood Clip was echoed in the markings of the linoleum in Poplars 19 1996-97 where the tree trunks drizzled with organic groves and nodules of time.

To me this was a stronger bolder work where the mystery of trees was etched in the structure of the composition.

A brighter light shone from the retro-reflective strip perhaps suggesting the scene was caught at a different time of day from the other artworks in the exhibition.

This commemorative exhibition was tempered by the silvery light of the moon and a smoky grey haze shrouded the viewer in an extraordinary insight into Rosalie Gascoigne’s beloved Lake George.

Rosalie Gascoine shared her interpretation and emotional connection to the landscape in visually poetic formations.

I could feel the cold of winter and the stifling heat of summer, the wind and rain, smell the seasons and hear the ghostly silence of this minimalist landscape. I could also see the links to Fred Williams and Tom Roberts.