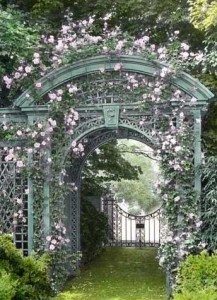 The vogue for spending mid-summer in a mountain retreat between 1870 and 1915 in the Blue Mountains at Leura in NSW, Mount Macedon in Victoria, at Stirling in the hills of Adelaide and Toowoomba in Queensland led to the establishment of large well planned luxurious European style gardens. As they developed there was a conscious attempt to naturalize into the lush Australian landscape, plants that were far more spectacular than local native flora could furnish, such as camellias, rhododendrons, azaleas, alpine plants and a variety of bulbs. Paths were laid out in graceful sweeps and defined properties that were fenced to provide an increased air of substance. Gardens were not complete without a gazebo or summerhouse designed to be the romantic focal point. Rose glamour, an arch laden with blooms whose latticed structure diffused light and shade much like an impressionist painting, provided the ultimate fashionable entrance statement.

Keep the music playing all year long in 2015, purchase a subscription series to your favourite music ensemble and keep loved ones smiling and humming out loud