Royal Childhood is an exhibition spanning more than 250 years of historical royal family life in England’s number one family, which will be integral to the ticket price of a visit to the State Rooms of Buckingham Palace during the English summer, 26th July to 28th September 2014.

Well-loved toys, treasured family gifts and tiny childhood outfits will provide an unprecedented glimpse into life growing up as a member of the royal family.

They will include previously unseen objects from the Royal Collection, the Royal Archives and the private collections of members of the royal family, as well as rare photographs and film footage.

Outfits such as velvet ‘walking suits’ belonging to King George V, a pink coat belonging to HM the Queen when she was nine years of age as well as Prince William’s page boy ‘sailor suit’ from the wedding of the Duke of York in 1986 will be sure to attract a crowd, as will a tiny pair of velvet shoes belonging to Prince Albert Edward, the future King Edward VII.

A number of Queen Elizabeth’s own childhood toys will go on display, including a pink tea set in the shape of a rabbit, a set of Knock em down Ninepins and a wicker pram the two-year-old Princess Elizabeth enjoyed pushing around the gardens of 145 Piccadilly, her family home until the age of ten. The Duchess of York and Princess Elizabeth standing outside in front of Y Bwthyn Bach, a miniature cottage in the grounds of Royal Lodge, presented to Princess Elizabeth by the people of Wales on the occasion of her sixth birthday, 1933, Royal Collection Trust / (C) Her Majesty Queen Elizabeth II 2014

Queen Elizabeth’s early love of equestrianism is reflected in a pair of rocking horses she and her younger sister Margaret played with from an early age. Each horse sports a rosette bearing the initials of one of the Princesses.

Being a member Royal Family during the 20th century for the Queen and her sister was very different to the childhood other ‘royal’ children born into that elevated position in life over the centuries would have experienced.

They would have been especially thankful they weren’t locked up in the Tower of London like the two princes born to Elizabeth Woodville and King Edward IV of England who died there under mysterious circumstances, while disputes over the succession raged.

Buckingham Palace has been a family home since George III (1738-1820) secured Buckingham House as a ‘dower house’ for his new wife Queen Charlotte in 1761 by an act of Parliament when it became known as The Queen’s House. On display will be a silver baby’s rattle dating from 1763 that was presented to the infant Prince of Wales, the future George III by his Governess. It was subsequently used by all of George’s 16 children, before being passed down through the family to Queen Victoria for use in her royal nursery. The silver font also descended from Queen Victoria, which was used more recently for the christening of Prince George at the Chapel Royal will be on display in Buckingham Palace’s Music Room.

There it can be seen alongside the silk-satin and lace-christening robe worn by royal babies since Queen Victoria commissioned it.

It was in 1774 that Charlotte first redecorated her newly acquired Queen’s House in sumptuous style as a private residence.

A wonderful painting of her by Johann Zoffany depicts her in her dressing room with two of her fifteen children the Prince of Wales (George IV) and Prince Frederick, both in fancy dress.

Queen Victoria commissioned a fourth wing in in 1845 to be added to provide ‘accommodation for our little family, which is fast growing up’. She and her consort Prince Albert had nine children. In 1883 Queen Victoria gave her newly born granddaughter Princess Alice a pink wool blanket that she herself had embroidered and it will be on show too alongside a tiny pair of velvet shoes belonging to Queen Victoria’s eldest son, Prince Albert Edward.

They have inscribed on the sole that they were worn by the future King Edward VII at the age of eight months.

The great granddaughter of King Edward VII, our current Queen Elizabeth Alexandra Mary was born on 21st April 1926. She was the first child of The Duke and Duchess of York, who later became King George VI and Queen Elizabeth.

He only succeeded to the throne when his brother Edward VIII abdicated to marry Wallis Simpson, a divorcee from America.

It wasn’t until the abdication of her Uncle Edward the King that she became heir apparent to the throne of England and became aware of her responsibilities and what they would be. As a child she was described as being entirely sensible and very well behaved during the remaining years of her childhood.

By ten years of age she was busy learning French as her other language and studying world literature, music and history.

The Princess Elizabeth’s early years began at 145 Piccadilly, the London house taken by her parents shortly after her birth, and also at White Lodge in Richmond Park.

She also spent considerable time at the country houses of her paternal grandparents, King George V and Queen Mary, as well as her mother’s parents, the 14th Earl of Strathmore & Kinghorne and his lady Countess at Glamis Castle at Angus, Scotland.

It was 1930 when the Princess finally gained a sister, with the birth of Princess Margaret Rose and the family of four was very close.

In 1932 their parents took over Royal Lodge in Windsor Great Park as their own country home. In the grounds of Royal Lodge Princess Elizabeth had her own small house, ‘Y Bwthyn Bach’ (the Little Cottage), which was given to her by the people of Wales in 1932 as a gift.

Like all girls of her age Elizabeth loved dolls and on exhibition will be two Parisian dolls that belonged to Elizabeth and her sister Margaret.

Queen Elizabeth and her young sister Margaret were educated under the watchful supervision of their mother and their governess Marion (Crawfie) Crawford. 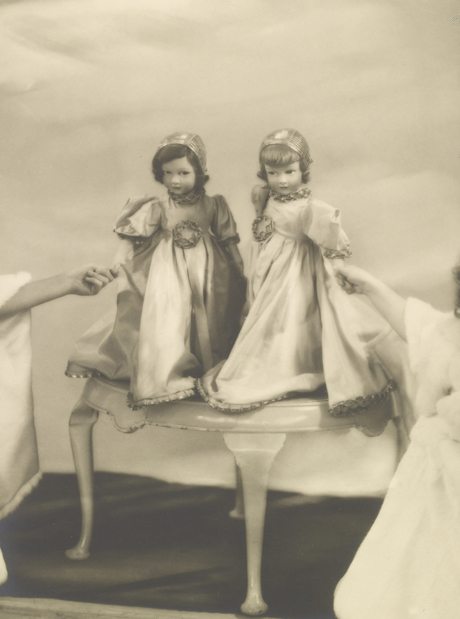 They are superbly dressed in French couture outfits and this show will be the first time they have been seen.

After Elizabeth’s father succeeded to the throne in 1936 as George VI and she became heir presumptive, she started to study constitutional history and law as preparation for her future role in life.

She studied art and music, became a Girl Guide when she was eleven and later a Sea Ranger.

During the period Britain was at war with Germany (1939-1945) the two princesses lived a great deal of their time at another royal residence Windsor Castle, which has a fairy tale quality with its irregular silhouette and varied towers.

In 1940 Princess Elizabeth gave an important Children’s Hour broadcast, speaking to children of the Empire at home and overseas.

Listeners in the United States of America also heard the broadcast.

Despite the hardships being inflicted on families everywhere during WWII, the royal children would have known about having, and the giving of grace from both their parents.

Queen Elizabeth’s childhood speech was indicative of the service she would always give for the greater good over the period of sixty plus years since she ascended the throne of England and became beloved by millions of people around the world.

Royal Childhood will be sure to be a popular show.

A Special Exhibition at the Summer Opening of Buckingham Palace, London
The State Rooms
26th July to 28th September 2014

Royal Childhood: A Souvenir Album by Anna Reynolds and Lucy Peter will be available

Awesome! Writer Steven Moffat has surely outdone himself with the first story in the second series of Sherlock “A Scandal in Belgravia” featuring the enigmatic and erudite Benedict Cumberbatch as Sherlock Holmes and Martin Freeman as Dr Watson.