England. Elizabeth I engraved medallic portrait in an ornate gold glazed mount with integral loop for suspension, c 1616. Simon van de Passe (c1595-1647) medallist, Presented to The Queen by Sultan Qaboos Bin Said of Oman, on the occasion of his state visit to Britain in March 1982 courtesy Royal Collection Trust

There are some amazing shows to see so if you are in England before Xmas 2014 or during 2015, check out the program.  The collection is one of the largest, most important as well as the last of all the great European royal fine and decorative art treasure troves remaining intact.

It is spread throughout some thirteen royal and former residences across the United Kingdom and held in trust by the Sovereign for her successors and the nation and is not owned by the Queen as an individual.

A stunning portrait of Elizabeth 1 was presented to the Queen by the Sultan Qaboos Bin Said of Oman. It’s a rare survival, the image based on an image by Isaac Oliver, a French-born Huguenot (Protestant) who with his parents arrived in England where he studied art and became a portrait painter, particularly of miniatures in the royal household. It was made by Simon van de Passe (c1595-1647) a medallist c1616.

Christmas will be a special time both at Holyroodhouse in Edinburgh Scotland and Windsor Castle in the countryside outside London, one of the monarchs of England’s favourite residences where Christmas has been celebrated for over 900 years. Windsor Castle will be decorated with wreaths and garlands, the table in the State Dining Room set up for a sensational feast.

In Windsor’s Drawing room a richly decorated tree brought in from Windsor Park will be covered with lights and decorations to form a feature.

At Holyroodhouse the silver service is engraved with the Scottish Coat of Arms.

You can go on an exclusive evening tour of each.

The photographic odyssey Cairo to Constaninople taken by the young Prince of Wales in 1862 recorded for the first time in photographs, will open at The Queen’s Gallery, Buckingham Palace on 7th November, 2014 – 22nd February, 2015.

This terrific tribute, to the talented photographer Francis Bedford will be sure to draw good crowds.

Bedford accompanied the young Prince of Wales when he was just 20 years of age, on an educational tour of the Middle East. It reveals Victorian perceptions about the exotic eastern regions at that time. They were just as ‘complex and contested’ as they still are today.

At the Queen’s Gallery from the 7th November to 22nd February 2015 and at Queen’s Gallery in Holyroodhouse from 27th March 2015, will be a wonderful array of golden objects in an exhibition named Gold.

A pair of fabulous Japanese lacquered bowls has their black ground sprinkled with gold. The deep rim is centred on a Bacchic mask, which is surrounded by grapes and vine leaves.

Lacquer objects of this quality was not really meant for Western consumption. The hypothesis is that they may have arrived in the West by means of the private trading officers of the various East India companies were permitted to carry out.

Gold reflects princely power and joy and its use is also a statement about beliefs, religious or otherwise, as well as personal wealth, social status and in the days before electric light, it reflected candlelight very prettily indeed.

The Rillaton Cup, which has survived from the Bronze Age, was originally buried as part of a funerary ritual around 1700 – 1500 BCE, as was the golden crown from Ecuador on display, which predates the age of the Incas. A gold tiger’s head ornament from Tipu Sultan’s throne, made from gold sheet over a wooden core, with finely chased and punched decoration, set with rock crystal eyes, rock crystal teeth and a hinged gold tongue, the mouth open as if roaring. The head rests on two large paws, on a square wooden plinth base covered in red velvet with four gilt metal ring handles. The front of the plinth has a rectangular presentation plaque. Indian, 1785-1793, Acquired by William IV presented to him by the East India Company in 1831

There is also an 18th century Tiger’s head fashioned gloriously from gold and rock crystal. It once used to adorn the throne of Tipu Sultan, ruler of Mysore in India.

Another interesting exhibition starting in November, which will be sure to warm many a heart with art during the colder winter months, presents some 20 masterpieces from the Royal Collection.

Masters of the Everyday: Dutch artists in the Age of Vermeer, at The Queen’s Gallery, Buckingham Palace

Masters of the Everyday: Dutch Artists in the Age of Vermeer and High Spirits: The Comic Art of Thomas Rowlandson will go on show in London at Buckingham Palace on 13th November 2015. The stunning work “A Lady at the Virginal with a Gentleman, ‘The Music Lesson’ by their still popular colleague Johannes Vermeer (1632-1675) will also be on show.

Fashionable ideas caught on quickly among the ‘top people’ as they have been described a fact scholars confirm through studying trends across Europe at this time.

Ideas percolated down through the social strata slowly, the process taking years and indeed in some cases, decades.

In the different phases of seventeenth century Dutch painting the portrait also played an important role. It expressed the unfailing self -assurance of merchants, doctors, preachers and scholars. Giovanni Benedetto Castiglione (1609-64) (artist), c1645-50, Acquired by George III when he was King of Great Britain (1760-1800) it’s a monotype depicting a bearded head of a man turned in profile to the right, with a turban and fur collar, courtesy Royal Collection Trust

Proud of their shipping and their explorers and captains adventures on the high seas, artists also brought marine painting into prominence at this time too.

Local artists in Holland in the main struggled to be recognized in their own city in the midst of a huge artistic outpouring that saw foreign artists given far more patronage and prominence by their own merchants. Sound familiar?

The Comic Art of Thomas Rowlandson now on at the Holburne Museum, Bath  until 8th February 2015, will be on display at The Queen’s Gallery, Buckingham Palace in London in November 2015.

Cartoonist Thomas Rowlandson’s works verged on caricature He published a set of pictures of life in Bath, which today give a graphic idea of life in Bath in the second half of the C18.

The Royal family at the time gave him plenty of daily subject matter, along with other aristocratic personalities, politicians and other powerful people in the law and other government positions of the day, working at a time when satirical prints were prized among collectors all across Europe. George Prince of Wales, later Prince Regent and George IV, who was often the butt of Rowlandson and other caricaturists jokes himself, purchased many of these potentially humiliating sketches, endeavouring to prevent the publication of those he felt were particularly offensive.

What they have in common is that they reflect not only the scenes of ordinary people going about doing everyday things, but also the absurdities attached to the human condition, which really never seems to change.

An etching presents a handsome plumber who has come to repair an old tap, in the reign of George II.

Her elderly husband looks on grumpily, as the young woman flirts with the plumber, who carries a phallic-shaped tap. ‘Rowlandson’s title leaves the viewer in no doubt about the outcome’.

From mid November 2014 until February 2015 , Castiglione: Lost Genius in the Queen’s Gallery at Holyroodhouse will be showcasing the innovation of Giovanni Benedetto Castiglione (1609-1664).

His life was coloured by his impetuous and often scandalous behaviour, which tended to overshadow his artistic brilliance.

On display from 6th August 2015 until early February 2016 at the Queen’s Gallery in the Palace of Holyroodhouse will be the sensational show Scottish Artists 1750 – 1900: From Caledonia to the Continent.

It brings together paintings, drawings, miniatures, all the works of painters who hailed from Scotland and travelled abroad to broaden their education and experience.

Allan Ramsay, Sir David Wilkie, Alexander Nasmyth and James Giles RSA (1801-1870) are all important Scottish artists. Their ideas and imagery represented the period of ‘Scottish Enlightenment, when they were very influential.

Allan Ramsay’s portraits combined a delicacy of costume and pose with a realistic treatment of the sitter’s features.

His exploitation of the evocative powers of his sitters’ facial particularities is at the heart of his immense success as a portraitist.

James Giles was a famous designer, painter and keen angler. He relished producing Highlands landscapes, although he’s probably more remembered for his sporting pictures, especially those reflecting his experiences as a fisherman.

He belonged to the Royal Scottish Academy (RSA) and just like so many artists of his age, was emboldened by the whole experience of Italy, travelling to Genoa via Toulon and Marseilles in 1824. He loved and admired Italy’s all encompassing atmosphere, which constantly inspired his fellow visiting artists.

The light particularly motivated his working hard to produce watercolours and oils to take back home when he returned in 1825. Alexander Nasmyth, heavily influenced by the works of Claude Lorrain

Having once owned an unfinished work by Nasmyth, it would be fair of me to say that he seemed to me to be inspired greatly by the works of French seventeenth century master classical landscape artist Claude Lorrain (1600 – 1682).

Claude’s was a world wrapped in the soft gentle haze of the early morning sunlight or the misty magical mood of moonlight, as he sought a moment of perfection.

His paintings of the picturesque: rolling hills and valleys, softly shaped curvaceous cumulous clouds, truly splendid rendering of trees blowing gently in a soft breeze using both light and shadow to depict morning, noon and evening with a whole new freshness would influence generation after generation of aspiring artists until the modern age. 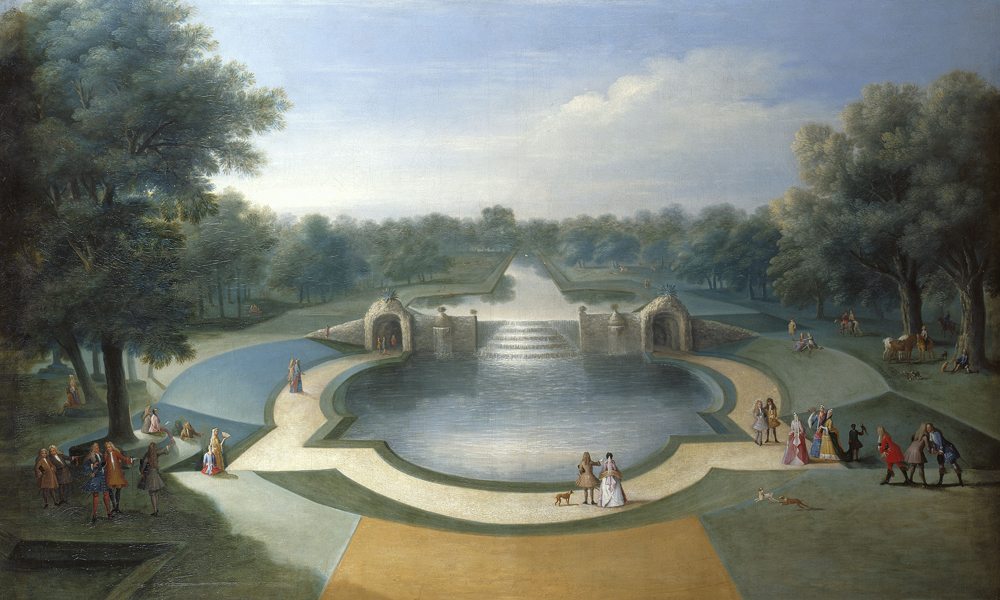 Painting Paradise: The Art of the Garden is also a show on the program for 2015, which we have discussed in detail. In the meantime, more information and dates and times of the shows in each of the Queen’s fabulous venues, just follow our links. 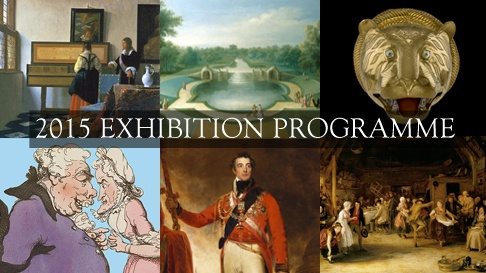 Waterloo at Windsor: 1815-2015
Saturday, 31 January 2015 to Wednesday, 13 January 2016
Windsor Castle
Throughout 2015, the 200th anniversary of the Battle of Waterloo, this exhibition will combine a themed trail through the State Apartments with a display of prints, drawings and archival material that explores the battle and its aftermath.

Scottish Artists 1750-1900: From Caledonia to the Continent
Thursday, 6 August 2015 to Sunday, 7 February 2016
The Queen’s Gallery, Palace of Holyroodhouse

Masters of the Everyday: Dutch artists in the Age of Vermeer
Friday, 13 November 2015 to Sunday, 14 February 2016
The Queen’s Gallery, Buckingham Palace