The RSA at London’s mission ranges from art to industry, education to entrepreneurship, from environment to design RSA at London - The Great Room in a House of Enlightenment...currently under renovation, the traditions of the past are being respected as its designers create a technologically advanced interior multi purpose space to meet the needs of Fellows and Visitors in the future

From its very beginnings in 1754 through to the current day, the RSA at London has continued to make a difference by encouraging and supporting innovation and creativity throughout society. It attracts thinkers, as well as doers, and is committed to community empowerment, cultural interaction and growing social progress. One of the reasons it has endured, remained relevant and at the forefront of social, economic, political and artistic thinking, is that it has always been a catalyst for constructive, practical change, rather than change for change’s sake.

Set up under a Board of Trustees, with powerful patrons and an administration led by a dynamic CEO, former Labour party Director of Policy Matthew Taylor, the RSA (Royal Society for the encouragement of Arts, Manufactures and Commerce) has its headquarters in a fabulous classically designed building at London. With its ‘Arts and Commerce Promoted’ banner high up on the facade, the original design completed in the 1770’s was executed by London based Scottish eighteenth century neoclassical architect Robert Adam (1728 – 1792). Facade 8 Adam Street by Scottish born London based eighteenth century architect Robert Adam, which is the headquarters of the RSA at London - Arts and Commerce Promoted

The RSA is sited appropriately on ‘Adam Street’ nearby one of England’s oldest thoroughfares, The Strand, which was part of a Roman road that in the Middle ages became the principal route between the two separate settlements of the City of London, the civil and commercial and the political centre. It is a hub for innovation. Recent governance recommendations approved will also assist the executive team to met morph the RSA from a UK based institution into a global one. We can presume William Shipley would be pleased the society is still in action and going from strength to strength as it Fellows actively participate in helping invent the future. 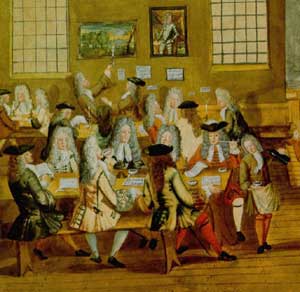 Shipley’s first meetings were held in a Covent Garden coffee house, empowering people in a contemporary setting and in a place where they gathered in a social atmosphere and safety. The society was established by Shipley on a marvellous manifesto “to embolden enterprise, enlarge science, refine arts, improve our manufactures and extend our commerce”.

Change happens when people ask important questions and seek answers to them and today the RSA’s work has been redefined in 21st-century terms. The many challenges it tackles are delivered through a portfolio of events and projects, including a lecture program consisting of over 100 events annually. Over 18 million people currently watch the lectures online and their 27,000 network of Fellows are a considerable force for civic innovation and social change. Current changes will set the society up for another 100 years of growth. What the RSA has achieved in the past, and is achieving right now in England to benefit society and cultural development, is nothing short of amazing. The RSA Academy is one of over 200 UK schools offering the RSA’s innovative Opening Minds curriculum. They provide a platform for critical debate and new ideas.

The RSA aims to remove the barriers to social progress and to turn words into action. It has re-assessed the phases of their operation globally and their original charter has been recently revised. It includes important and exciting changes for the continuing governance of the RSA into the future.

A report from those delivering RSA Projects examines the government’s initiative The Big Society in terms of the demands it places on people, and from a perspective that is neglected by policymakers – mental complexity in the adult population.

It is all about a ‘capacity to understand competing motivations and values in ourselves and others, and to act appropriately in uncertain or ambiguous situations‘.

This has helped accommodate the spread of the RSA Fellowship in the United States. US Statesman Benjamin Franklin set the precedent by becoming a Fellow in 1756 when he was living at London. There are networks now operating in Australia and New Zealand and recently events  have been held in Canada, Singapore, Japan and New Delhi.

The RSA at London in England remains an independent, non-aligned, multi-disciplinary body, supported by over 27,000 Fellows internationally.

As a Fellow you would have an ability to meet many people in different fields and make a difference; gain an ability to be more effective at fostering genuine debate and stimulate new thinking; be able to bring people with expertise in different areas together and contribute to challenges facing society.

It is all about social profit. If you would like to become a Fellow then you need to demonstrate a commitment to positive social change in your professional, civic or personal life. The RSA’s enthusiastic CEO Matthew Taylor has produced a video talking about who they are, their work, the Fellowship and future.