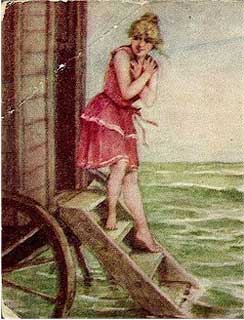 …alike gay widow, virgin, wife
Ingenious to diversify dull life,
In coaches, chaises, caravans and hoys,
Fly to the coast for daily, nightly joys,
And all impatient of dry land, agree
With one consent to rush into the sea…
In the first few decades of the nineteenth century at London people in high society concentrated on acquiring a polished ease and politeness of manner to distinguish themselves from the ‘noveau riche’. They expanded their horizons from the town all the way to the sea. Villages with either a spring or a sea front were very fortunate because this was the age when they began to prosper. Brighthelmstone; a small, dirty, unattractive spot on the coast became a brilliant place to invest in after George, Prince Regent of England later George IV, built his marine pavilion. His doctors advised as to the many benefits of sea bathing and so he led his people by example plunging into the waves from his very fashionable bathing machine.

Treasures from The Palace of Versailles will be on show at The National Gallery of Australia in Canberra ACT from December 9, a once in a lifetime experience