We don’t see many ‘tousled and sooty’ little chimney sweeps around town any more, although it we were in Sydney nearby to where the Pinchgut Opera is in final rehearsals for their mid-year production’s opening night, then we may just encounter more than we bargained for. For their performance of composer Antonio Salieri’s The Chimney Sweep, the Pinchgut are being joined by a children’s chorus for the very first time in their history. 40 members of the Sydney Children’s Choir aged 10-12 years, similar ages to their 19th century counterparts are taking to the stage. The original librettist for this delightful piece was Johann Leopold von Auenbrugger a man of science and medicine. He dissected complex human behaviour to create all his characters. Indulgent yet vulnerable, self obsessed yet open, they remain as identifiably human as the perfect people taking the main roles today. They include the lovely pocket size Soprano with the sensational voice Alex Oomens as Lisel, The Chimney Sweep‘s love interest. Since her triumph in Giasone last year she has studied in Florence and performed with the ACO whilst completing her honours year at Sydney’s Conservatorium of Music. 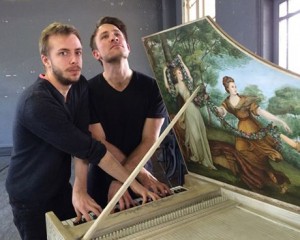 This is an opera about ‘real people’ there is nary an aristocrat in sight, a highly unusual setting for the hierarchical status mad 18th century. Rehearsals are in the final week and this neglected gem, starting on Saturday July 5th at the City Recital Hall Angel Place, is shaping up to be yet another revelation for the audience. Nicholas Hiatt is playing Fränzl and Gary Clementson is playing Hansel; two of the servants of the Hawk household. In this scene they are accompanying Volpino in one of his elaborate Italian arias on the household harpsichord. Dave Hidden plays Tomaso, the master ‘sooty’ chimney sweep. David is stepping up from the Cantillation chorus for his role debut. You’ll see from this picture of him being fitted for his costume that he has style and substance, even if he’s a tad shabby. The action takes place in Vienna, and it takes its sly look at life under the guise of frivolity. Desire, gratification, and ambition are also exposed as real and primary. Yet also present is genuine affection, an abundance of generosity and an appetite and delight for life that is as inspiring as it is enjoyable. Conductor Erin Helyard said recently that he “came across Salieri’s The Chimney Sweep quite by accident during my studies at McGill University in Canada… as a long-time admirer of the works of Salieri, I was fascinated to find a work rich in humour, invention, and virtuosity”. 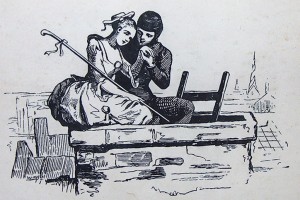 Keep warm this mid-winter with friends at this fun and sexy foray into the music of Salieri. Not only will you be supporting the spread of early music, but by bringing a bunch of friends – 10 or more people, you can secure a $10 group discount as well.  This Pinchgut Opera production promises comedy, delight, and some truly beautiful music. Don’t miss out! BOOK NOW!

Rose Niland reviews This Much is True by Louis Nowra directed by Toby Schmitz, presented by Red Line Productions at the Old Fitz Theatre, Woolloomooloo, Sydney