We may have once thought a garden simply consisted of ordered beds of pretty flowers set into manicured lawns. Gardens throughout Europe and England however during the seventeenth century required that their designers, apart from an extensive knowledge of plant material, were also skilled at engineering and aesthetics. The spread across Europe of French taste was uneven, but France had no rival in this field and it was merely a matter of time before everyone was following the French lead. As commerce prospered and riches were amassed a fresh generation whose income came from investments, land and houses, came to demand the luxuries French culture was skilled at devising,

Salomon de Caus (1576-1626) was a French Huguenot (Protestant) mathematician, engineer and a leading expert in the business of hydraulics.

He became renowned in England during the early part of the century for the gardens he created and the books that he wrote.

de Caus was an hydraulic engineer and architect during the reign of Louis XIII in France, spending much of his life ‘on the move’.

He also worked in Frederick V, the Elector Palatine’s garden in Germany, where his significant horticultural accomplishments included a water organ, whose birds sang as nightingales.

The gardens, as represented in de Caus’ original designs, were recreated digitally at the European Media Laboratory in Heidelberg in 2003. While only a few visual records of his work remain, he is attributed with introducing into England the concept of a house and garden being designed as a single composition.

De Caus was employed by Robert Cecil the 1st Earl of Salisbury, statesman, spy master and first minister to Elizabeth 1 and James 1 of England.

At Hatfield House in Hertfordshire de Caus improved his existing garden by the addition of cascading fountains. His designs were considered artistic, practical, romantic, humorous and endlessly inventive.

They went beyond all boundaries as he dedicated himself to every detail, including composing the music for the water organs.

De Caus advised the Prince of Wales at Richmond Palace and Queen Anne of Denmark at Greenwich and Somerset House.

In the gardens of Queen Anne he applied the fashionable Italian touch, his ideal Mount Parnassus a mount traditionally sacred to the Greek Sun God Apollo and the ancient Muses, the goddesses or spirits who inspired the creation of literature and the arts. Basically it was nothing more than a huge pile of boulders decorated with statues but it certainly grabbed everyone’s attention.

The one at Somerset House in England was 10 metres high.

At the summit the mythical winged horse Pegasus was poised prancing about with his wings outstretched while Apollo played a violin surrounded by the Muses.

They all moved gently under a thin mist of spray from jets around the pool, which were powered by hydraulics.

What amazing follies these mounts were.

While making a gesture to nature they were utterly and completely contrived.

They would eventually lose favour because of the difficulties caused by the weather, the supply of water, the cost of maintenance, which at this time in the development of machinery must have proved very difficult because it rusted near water.

Not to mention what happened when it ‘iced up’ in winter. Fountain of Apollo in the Garden at Versailles, France

These contraptions did however, apart from putting a smile on everyone’s faces,  made a profound impression.

They undoubtedly gave impetus to the idea of the fantastic and the bizarre giving pleasure, one that stayed in the English consciousness for a long time.

The Baroque style of garden of the 17th century, became renowned for its grand gestures, strict ordering, love of symmetry and wonderful fountains.

They dovetailed nicely with composer Johann Sebastian Bach’s great organ works, which were very grand and were felt all the way down to the depths of your soul. If you were religious they are meant to glorify God and intensify those feelings. Red House, delightful folly in the grounds of Painswick Rococo garden in the Cotswolds of England

By way of complete contrast the changes of the first fifty years of the eighteenth century would be very dramatic.

In the comparative peace of the early eighteenth century in France there was a reaction to the formalized designs of Louis III’s time as well as Louis XIV’s famous gardener Andre Le Notre at Versailles.

Le Notre had turned formal gardens into a high art form. It reflected composer Johann Sebastian Bach’s great organ works, which were very grand and whose rich sounds can be felt deeply right down in the depths of your soul.

If you are religious they glorify God and intensify those feelings.

The new style, later given the name Rococo, was all about being carefree, enjoying intimate liaisons, prompting enjoyment and, promoting a smile. Snowdrops in the dell, Painswick Garden, the Cotswolds

Wolfgang Amadeus Mozart’s spirited sonatas and divertimento were perfect for the garden that today we know as typically Rococo.

They reflected its characteristics, frivolous, fanciful, fantastical, breaking down formality or regularity of design and using deliberate asymmetry and irregular shapes.

It was now all about the pleasure being enjoyed much nearer to sa urface level, prompting an impromptu happy response from the listener without them having to think too deeply about it.

Gardens of immense size were suddenly out of fashion. They were useful for planning amusing picnics with musical entertainments for your friends, which had perfect views of mischievous putti, that although frozen in stone, were featured frolicking about. Statuary in gardens gained in importance and heroic gods were gradually replaced by shepherds and shepherdesses, or peasants romanticized in pretty costumes that were all alive with movement.

Cherubs, sphinxes and waisted baskets brimmed with fruit or trailing ivy and flowers became the norm.

There was a rich vocabulary of concave and convex curves to draw upon that was originally developed from the grand manner of baroque architecture, but now lightened in form and applied much more delicately.

The Rococo style was above all else about a mood, an atmosphere or a way of using the garden for pleasure.

The gardener was not expected to spend hours pruning to keep everything in order but was encouraged to allow trees and shrubs to throw out long arching graceful branches and to leave old clipped hedges so they were softened by purposeful neglect.

Flowers were planted to spill out and tumble in glorious disarray providing great bursts of colour in unexpected places.

Small picturesque scenes were required and gardens became the DIY province of those interested in aesthetics, rather than the preserve of the trained designer or architect. The emphasis was on exuberant creative pleasure rather than cold academic analysis.

An important aspect of the Rococo, which appealed to English sensibilities was its frivolity and freedom. All over Britain the unique addition of the bizarre and whimsical would establish a tradition that still continues today. Garden gnomes are just one extension of this idea.

The eighteenth century would become the aristocratic century in France, one in which society changed and rapidly expanded with the bourgeoisie becoming more and more influential as the century progressed.

Financiers now mingled with older nobles and, as well, intellectuals brought advanced ideas into vogue in a milieu where women led the way in a refinement of taste, an awareness of good manners a sense of appropriateness, in short, the art of living.

A love of things oriental fitted into both the French and English garden genres at this time.

A love affair with the exotic orient provided a focus for tales of the fantastic and the magical land in the East enraptured the whole of Europe. Exoticism from this period onward in its varying forms has never really gone out of fashion; it just keeps being revived and renewed from time to time.

During the English civil war in the seventeenth century Oliver Cromwell’s troops were quartered in the woods surrounding a Chinese fishing village at Alresford in Essex.

The style of its pavilion was very restrained and elegant, quite unlike the authenticity sought by eighteenth century architect William Chambers, who was Scottish born neoclassical architect Robert Adam’s great rival. Chambers pavilion at Amesbury Abbey, commissioned by the Duchess of Queensbury, was constructed of trapped flint arranged in patterns, with deep projecting eaves and unglazed oval windows.

The Duchess was involved in every aspect of its construction and decoration, and her letters indicate her desire to employ a Swiss painter to decorate its interior.

No signs that this intention was carried out are evident, uninhabited for years it has today been rescued and restored and provides a place of repose for elderly residents who enjoy the garden.

Many deplored this fanciful style but felt obliged, as Robert Morris who published Architectural Remembrances in 1751 did, to at least include one design in the oriental taste.

He added an attacking postscript to his book that said…

…it exists in mere WHIM and CHIMERA, without rules or order, it requires no fertility of genius to put in Execution; the principals are a good choice of chains and bells and different colours of paint; as to the serpents, dragons and monkeys etc., they, like the rest of the beauties, may be cut in paper and pasted on anywhere, or in any manner; a few laths nailed across each other, and made Black, Red, Blue, Yellow, or any other Colour, or mix’ed with any Sort of Chequer Work, or Impropriety of Ornament, completes the whole. 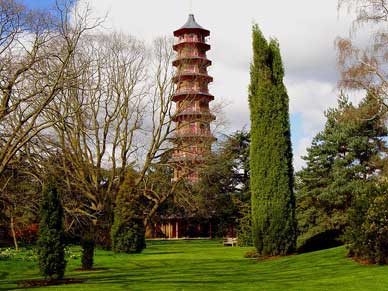 Nowhere was there a larger collection of exotic buildings than in the royal gardens at Kew.

There was a Turkish mosque, a Moorish temple, a House of Confucius and six more Chinese structures; a temple, a pavilion in a flower garden, another on a circular lake approached by a zigzag bridge and two more arched bridges.

Architect Sir William Chambers also designed the Kew pagoda in 1757, inspiring other such structures in Europe. Once there were dragon finials on every corner, but these have not survived.

Chambers had the distinction of being one of the only Englishmen of his day to actually ever visit China. He published Designs for Chinese Buildings in 1757 and became, because of his important position as Director of Public Works for King George III, overnight the foremost authority on Chinese architecture and taste. Today, growing flowers in wild abundance is part of the delights of gardening, and only one aspect of an ever evolving story that satisfies the human spirit to a profound degree.