Early eighteenth century gurus of taste in England and Europe considered the fine arts, painting and sculpture addressed all the so called pleasures of the imagination individually, collectively and corporately. A gentleman or lady both wanted to experience great emotions of taste and the interiors of their houses, whether in the country or the city, which were stylishly arranged to suit such a purpose.

At the heart of it all was London, the greatest centre for pleasure, where being one of the ton meant living for the fun and good times. It was far more than a place of streets and houses, derelict districts and aristocratic quarters; its uniqueness being that it was for many a focus of aspiration and inspiration for it was the seat of the imagination for Britons, including those at London making long-case clocks and watches.

Mechanical clocks were invented in Western Europe during the medieval period and were first used in cathedrals and churches and it was early in the 16th century that the watch emerged.

The advance of modern times really began with the invention of the pendulum in 1656. The adoption of the Pendulum clock irrevocably changed the way society operated throughout the western world. While it was Italian physicist, mathematician, astronomer, and philosopher Galileo Galilei (1564–1642) who discovered the principle of the pendulum, it was Dutch mathematician Christiaan Huygens (1629–1695) who invented the first version of a timepiece with a pendulum in 1656.

A year later, Salomon Coster in The Hague obtained exclusive patent rights for making Huygens’s pendulum clocks. The Fromanteels, a prominent family of London clockmakers, sent one of their sons John (1638–after 1682) to become a journeyman in Coster’s workshop.

Huygens published his idea for a precision pendulum in a small booklet titled Horologium in 1658 and by November of that year pendulum clocks were already on sale in London. People on the whole now adopted the way of life, that would form the basis of the culture attached to western tradition.

This is also a time when learning became of major importance and science began to move out of its secretive, tradition bound practices into a more level headed inquisitiveness, attempting to discover order and regularity in every facet of the universe.

A clockmaker or mender was known to have been in the vicinity of Westminster Abbey from as early as 1469. Another report says six French makers were imported to make a clock for Henry VIII’s Nonesuch Palace, which was originally built from 1538 and during its time was a centre where foreign artists executed elaborate and very costly work. This was confirmed by the excavations carried out by archaeologists in 1959-60 of the site where it had stood.

The London Clockmakers’ Company was incorporated (1632) and the trade really started in earnest after Charles II was restored the throne. It gained great momentum under William and Mary and Queen Anne, and bloomed beautifully during the reign of four of the Kings named George – 1714 – 1830.

One watch and clock maker about whom not a lot is known was Samuel Macham. He was making clocks and watches around 1690 – 1715 at London. If it wasn’t for the custom of marking the works of each watch with the name of its maker we wouldn’t know about him at all.

It came up at auction in London at Bonhams Auctioneers 2007 and is now part of the collection of Martyn Cook (Martyn Cook Antiques) at Sydney. 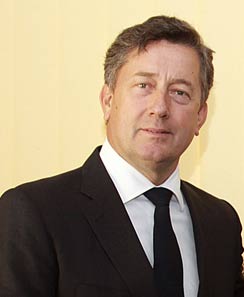 Martyn Cook has long had a personal interest in clocks, watches and barometers, which he passionately pursues.

Although there are still a number of ‘dials’ on Long-Case clocks around today bearing Sam Macham’s name, finding watches made by him are extremely rare. There is a ‘sun and moon’ watch in the British Museum with its movement made by Samuel Macham dating to the years 1690-1700 and a case by RB about whom nothing is known.

Its pair of cases however is made of silver and tortoiseshell so its quite wonderful too. The outer case is engraved with a building, tree, a bird and the sun and it has a silver sun and moon dial; the verge escapement, the earliest known type of mechanical device, bears the image of a cock with the arms William III.

This glorious gold watch in Martyn Cook‘s collection is gilt brass, with a full plate double-train movement and signed Macham London, the inner case pierced and engraved with foliage decoration, the outer gold case with fine engraving, the band pierced and engraved with foliage and two vignettes of rural landscapes, indistinct mark for William Jacques of Angel Court, Snow Hill.

It has a gold champlevé dial with Roman numerals and is very appealing.

After our past four weeks discovering body types, I thought it would be a perfect time to let you all in on the one piece every gal needs in her wardrobe. Yes it’s the wrap dress! The wrap dress is 40 this year and still looking fresh and fabulous as…