You couldn’t make up a ‘quite interesting’ story for a script in Hollywood as that of the lost and found story of four bronze ‘angels’ owned originally by two men of power in English history, Thomas Wolsey (1475-1530) Roman Catholic Cardinal and Lord Chancellor of England and King Henry VIII (1509-1547).

Wolsey’s four Angels, once thought lost, have been found and reunited for temporary display in the Victoria and Albert Museum (V&A) at London in the Medieval & Renaissance galleries. The objective is to retain them permanently.

“The Wolsey Angels are unique survivors of the turbulent Tudor court. This is a once in a lifetime opportunity for the V&A to acquire them and we’re pleased to be playing our part with a £2m contribution. It is hugely exciting the quartet has been reunited…”

The V&A wants to encourage donations towards the remaining £2.5million needed by the Museum to acquire them for their permanent collection.

Members of the public are invited to donate to the campaign in the gallery, online or via text.

“The Wolsey Angels are a vital part of our national history and artistic heritage. Little of Benedetto da Rovezzano’s English work survives and we are fortunate to be able to put these outstanding sculptures on display…” The angels commissioned by the English Tudor periods most highly regarded and ungraciously swept aside disgraced priests Cardinal Wolsey for his tomb.

They were created in a day when powerful men built monuments to their own glory. It was all about reflecting their wealth and social status for eternity.

Wolsey the son of a butcher, rose through the church hierarchy to become Archbishop of York, head of the Catholic Church in England, Lord Chancellor and one of the closest advisors to the King.

Wolsey loved princely magnificence. He is particularly remembered for building the first great palace at Hampton, which the King later confiscated and extended.

Undoubtedly a proud man, Wolsey in 1524 commissioned a skilled craftsman, the Florentine sculptor Benedetto da Rovezzano (1475-1552) who was a contemporary of Michelangelo, to design his lavish tomb.

It was to be completed in what we now know as the Renaissance style. Four Angels were to be an integral aspect of this lasting legacy to his achievements in life. They were to stand prominently on the four corners of his tomb as guardians for all eternity.

The four incredible Renaissance sculptures, originally seized by Henry became separated and eventually lost. Wolsey’s Angels remained undiscovered until amazingly they re-appeared at an auction in a Sotheby’s sale in 1994.

SAVE THE WOLSEY ANGELS

The recovery of Wolsey’s angels is one of those miracles that historians pray for; something that seems irrevocably lost has been there all the time. To claim the angels for the nation would connect us to one of the liveliest eras of our history and one of its most remarkable men.” – Hilary Mantel Thomas Wolsey had become a ‘victim’ of the King’s outrage in 1525. Henry VIII appropriated his house Hampton Court plus all his possessions, including his tomb, which the King fully intended to use for himself.

It was the act of failing to obtain a divorce from the Pope at Rome for the King who was mad with desire for the new lady in his life Anne Boleyn. His failure caused Cardinal Wolsey (Red Ned) to suffer extreme humiliation and not long later death.

Up until this point Wolsey had pleased the King for fourteen years and on the journey to York after his disgrace he fell so ill that he eventually died in 1530 at Leicester Abbey. The 16th century in England had begun with an era of peaceful and stable government due to Henry VII’s efforts. He came to the throne at 18, immensely popular a gifted man of intelligence, accomplishment and self-confidence.

He and his people looked forward to a reign of progress and indeed the first twenty years were seemingly happy ones.

Contentedly married to Catherine of Aragon a witty, learned, charming girl she had given him a daughter, and he wanted to outshine the princes of Europe.

As well he had the means and the innate taste to do so and he set about it with great gusto.

The sculptor Benedetto worked in England between 1519 and 1543, establishing himself at Westminster where he employed founders and other craftsmen.

His pre-eminent patron was Cardinal Wolsey and examples of Rovezzano’s work in England are rare.

It was in 1508 that Rovezzano was commissioned to finish Michelangelo’s bronze sculpture of David (now lost), indicating his metalworking skills were much in demand. Italian artist and biographer Giorgio Vasari (1511-1574) who wrote about the’ Lives of Artists’ of his day described Benedetto da Rovezzano as being “among our most excellent craftsmen”.

Now Henry VIII commissioned him to finish Wolsey’s tomb for himself.

King Henry however did not live to see the tomb finished.

Despite his three children expressing their intention to complete his memorial posthumously, they all failed too.

Thank heavens Daddy wasn’t around to punish them all!

During the Civil War and subsequent reign of Oliver Cromwell (1599-1658) in England during the period known as the Commonwealth, most of the tomb’s parts were lost.

The only part remaining was a ‘black stone chest’ later used in St Paul’s Cathedral for the internment of England’s heroic Admiral Nelson.

Wolsey’s Angels were not illustrated in the Sotheby’s catalogue for sale.

They were referred to only as a pair of large bronze angels in the Renaissance style, because as at this stage their original provenance still remained unknown.

The angels at that point were sold to a Parisian art dealer. Eventually they were attributed to Benedetto’s tomb for Wolsey by the Italian art historian Francesco Caglioti, a Professor of History in the Department of Humanities at the University of Naples Federico II.

What a wonderful opportunity the ‘angels’ have provided for researchers tracing their tracks.

It would be in 2008 when the remaining two angels were discovered at Harrowden Hall, a country house in Northamptonshire and it’s now a ‘Gold Club’.

If that wasn’t enough then came the final revelation … all four sculptures once stood above the posts of Harrowden Hall’s entrance gates!

Two had been stolen from there in 1988, although no one’s really saying how they got there, well at least at this point.

Harrowden Hall had been owned by the Vaux family who were even more interestingly granted a barony by Henry VIII in 1523. Sir Nicholas Vaaux was a poet and member of the courts of both Henry VIII and  his son Edward VI. They were rlated to Queen Consort Catherine Parr

Were they preserving and protecting the angels by hiding them in plain sight? 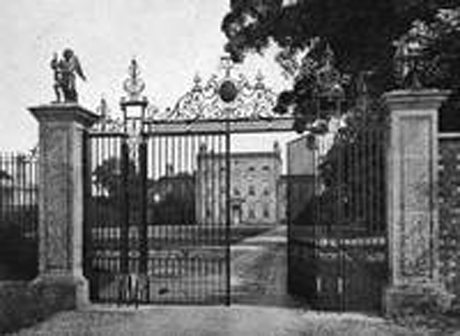 Old photo of the angels on the gates…

There is no doubt they were loyal to the King, as can be discovered in the history of Harrowden Hall.

Amazingly has its own lost and found story.

It’s recorded in the Parish register of Great Harrowden that

‘The church of All Saints lies south of the Olney road. East of the church is Harrowden Hall, a spacious mansion in the simpler fashion, with beautiful gardens. Its predecessor, ‘Mrs. Vawse’s house at Harrowden’, was a centre of the recusants during the minority of her son Edward, fourth Lord Vaux, and at the time of the Gunpowder Plot. In 1601 Henry Knowles wrote to Sir Robert Cecil (chief advisor to Queen Elizabeth 1) of a refugee in this house, ‘I am certainly informed that if I should see him go in and presently see the house there be such places for concealing him as except a man pull down the house he shall never find him’. Harrowden Hall was first lost to the Vaux family in 1695. It was sold to Thomas Watson Wentworth, a son of Lord Rockingham of Rockingham Castle and it became a fine example, with extensions, of the ‘Georgian style’.

It was two centuries later when the 7th Lord Vaux, who died in 1935 bought it back.

His daughter became Baroness Vaux of Harrowden and upon  her death in 1958 the ownership passed to her eldest son, Father Gabriel Gilbey, a Benedictine monk, who took his seat in the House of Lords as the 9th Lord Vaux, the first Benedictine monk to do so since 1559. The heir apparent to the title Baron Vaux is the present holder’s son the Hon. Richard Gilbey (b. 1965).

It was 1975 when the hall was acquired by Wellingborough Golf Club to be its new Clubhouse after being rescued from demolition by Mr. A. James Macdonald-Buchanan, High Sheriff of Northamptonshire for 1972 and saved for posterity too.

Those Four Wolsey Angels it seems have been working really hard!