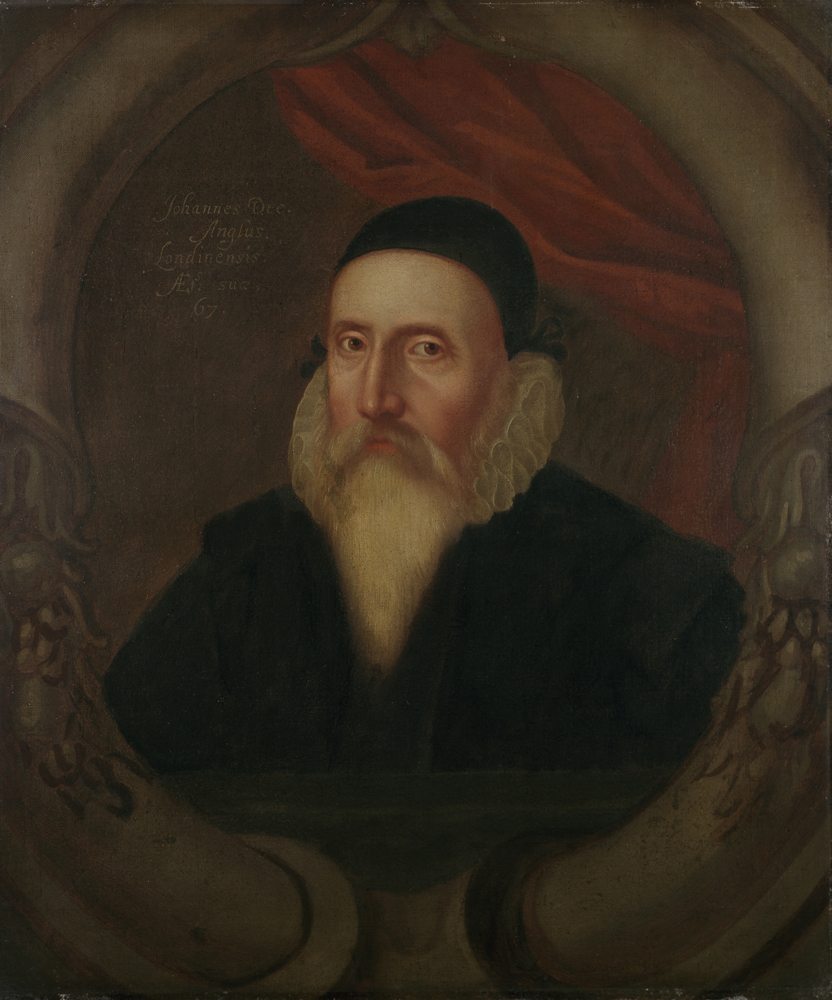 The subject of a landmark exhibition at London in 2016, Dr John Dee was a mysterious personality from Tudor England.

John Dee was an extraordinary figure with interests from astronomy to alchemy, exploration to the occult.

He was also a mole for the Virgin Queen Elizabeth 1, signing his name with the code number ‘007’.

Was he then the inspiration for novelist Ian Fleming’s enduring espionage agent for the British government James Bond? Speculation abounds, after all Commander Ian Fleming was integral to British Naval Intelligence during World War II.  He also met many famous ‘spooks’ when working as a journalist during the 1950’s.

Interestingly John Dee did not hold any formal medical qualification and was not a member of the Royal College of Physicians, but here he is some 400 years later still causing a stir amongst their ranks.

Fact could be more fantastic than fiction. Just the notion Dr Dee may have been the ‘original 007’ back in Queen Bess’s day is a much more dashing and appealing scenario, but do the facts fit the profile? Whether he was the Queen’s secret emissary or not, the surviving remnants of John Dee’s collection of books reveal an individual of wide ranging and unconventional intellectual curiosities. Magic mirrors, crystal balls plus his collection of books certainly reveal an individual of wide ranging and unconventional intellectual curiosities.

The whole idea of him being 007 is certainly captivating. His objects and guides relate to the art of love, mathematical treatises and offer an introductions to the craft of alchemy; turning base metals into gold.

‘A Constellation for John Dee’ created by artist Jeremy Millar, was commissioned by the Royal College of Physicians.

The film is characterised by a strong affinity with the antique and the books one of Elizabethan England’s most enigmatic and intriguing personalities read.

John Dee’s astrological textbooks reveal the man imprisoned for casting horoscopes for Queen Mary 1, was nicknamed Bloody Mary for having hundreds of religious dissenters burned at the stake.

Strangest of all are the accounts of Dee’s ‘conversations with angels’: he believed himself in contact with divine spirits and then there are his works on cryptography, the secret science of codes. One book on show came complete with a revolving wheel for deciphering hidden messages and texts.

The small selection of Dee’s surviving personal possessions would certainly have been of advantage to anyone engaged in undercover operations: if that is they worked.

From the British Museum comes a crystal ball for researching the occult, a ‘magic disc’ to contact angels and ‘magical mirror’ for conjuring visions.

The Science Museum supplied a ‘scrying mirror’ for predicting the future and John Dee’s own crystal, of interest given to him by the angel Uriel, who also ‘instructed’ him on how to make the philosopher’s stone.

Gosh sounds like even Harry Potter may have been involved. The sixteenth century was a time when Mountebanks apparently abounded and one remedy it seems was as fatal as another was.

Quacks were innumerable and, in no way hampered by any thoughts of an ethical code and besides they were usually so much more fun, with a charming manner, while some undoubtedly had some skill

In country districts particularly the Mountebank thrived, as there was little or no control over medicine.

They used the public platform to espouse their abilities and perform ‘cures’ in a type of ‘carnival’ act.

The Quack usually rode around on horseback, dispensing pills and plasters on a small scale although he entertained lavishly giving dinners, alms and free drinks to gain a foothold among the unwary.

It was during the eighteenth century that doctors would participate in endeavouring to guide human understanding by the demystification of the marvellous and miraculous – those things that seemingly belonged to an Empire of chance – the so-called ‘Acts of God’.

Many believed these acts could be mastered by science.

This would be achieved through fact-collection, digestion of data into tables, equations and ratios, and finally during the nineteenth century, by application of the ‘law of large numbers’.

They wanted to not just look ‘heavenwards’, as they had done for centuries for explanations when mortal afflictions struck, but through enlightenment evolve certain strategies for the future of mankind and of medicine.

Clearly too, they must have felt just as frustrated as many do today when endeavouring to understand the impact of technology on our lives and just what it means for the future of mankind The publication of ‘John Dee: scientist, geographer, astrologer and secret agent to Elizabeth I’ by Richard Deacon in 1968, started the controversy. It was Deacon who indeed suggested John Dee was the original 007.

1. Visionary of the British Empire; coined the word Brittannia and developed a plan for the British Navy.

2. The first to apply Euclidean geometry to navigation; built the instruments to apply Euclid; trained the first great navigators; developed the maps; charted the Northeast and Northwest Passages.

3. An angel conjuror with his sidekick Kelley; the angels told him what Britain would have in their eventual empire; used an obsidian show stone which came from the Aztecs/Mayans and rests in the British Museum along with his conjuring table which contains the Enochian Alphabet he used as angel language.

4. Philosopher to Queen Elizabeth; did her horoscope; determined her coronation date astrologically; she came to visit him on her horse.

5. Founder of the Rosicrucian Order, the protestant response to the Jesuits.

6. An alchemist; hermeticist, cabalist, adept in esoteric and occcult lore.

7. Translator of Euclid and wrote the famous Mathematical Preface, mapping mathematical studies for the future, a kind of system of the sciences based on math.

8. Put a hex on the Spanish Armada which is why there was bad weather and England won.

9. Commissioned by Elizabeth to establish the legal foundation for colonizing North America; went back to Madoc, a Welsh Prince who took a group over to New England in the middle ages and established the first colony, and intermarried with the Indians, but with little or no historical trace but for the legend.

10. Instrumental in theatre arts and architecture.

11. Shakespeare depicted him as Prospero, and King Lear.

12. Sold the Voynich Manuscript, the most mysterious, a cipher as yet to be deciphered–“the Everest of cipher studies”–to the Holy Roman Emperor–Rudolph II–for a lot of gold. Resides at Yale in the Beineke Library. Probably an herbal and an almanac by Anthony Askham.

13. Had the greatest library in England over 4,000 books.14. Biography by Peter French and everything by Francis Yates, his greatest advocate: cf. especially THE ROSICRUCIAN ENLIGHTENMENT.