Drawing. Reconstruction of Scythian horseman based on the excavated finds from Olon-Kurin-Gol 10, Altai mountains, Mongolia. By D. V. Pozdnjakov, Institute for Archaeology and Ethnography of the Siberian Department of the Russian Academy of Sciences

The British Museum has a new exhibition about the nomadic Scythians, Warriors of Ancient Siberia. Sponsored by BP it will be on show from September 14, 2017 – January 14, 2018 and will challenge us all to keep learning from the past.

The Scythians lived in what is now Southern Siberia, where they and their culture flourished from around 900 BC to 200 BC, extending their sphere of influence from China to the northern Black Sea. The Greeks, Assyrians and Persians were pretty impressed with their enemies and their achievements, and their feats are described in their records.

One thing all ancient societies have in common is their admiration for Gold, its polished state a constant reminder of the Sun, which gives the earth warmth.

Ancient Greek philosopher Aristotle talks about gold in his landmark work The Ethics, about ‘…the excellence of a possession… most valuable which is worth most, gold; as a work.. great and beautiful’.

It is clear he thought ‘… the contemplation of such an object, admirable’. A map of Eurasia showing the extent of the Achaemenid empire (in red) and the Eurasian steppe and mixed woodland largely occupied by the Scythians (in Green). Map produced by Paul Goodhead., courtesy British Museum

Ancient societies were often marked by a complex social and political organization. Those living in settled city-states enjoyed material and scientific progress.

They learned to value an imaginative use of limited resources, to embrace enlightenment through music, literature and other related intellectual and spiritual activities.

The cultural growth of many ancient societies became accessible and discernible through creative artistic achievements unearthed all over Europe with growing passion since the fifteenth century. But what about those people in ancient times who were nomadic like the Scythians?

Today scientists and archaelogists are working together to reveal the splendour and sophistication of what is a unique society on the move.

Many objects for this show will be on loan from the State Hermitage Museum in St Petersburg.

Studying the finds reveals the story of the people and their culture’s evolution and demise, which is emboldened by the spectacular nature of the finds. Gold applique showing two archers back to back, Kul Oba, 400BC – 350BC © courtesy The Trustees of the British Museum With a reputation for being ‘fearsome warriors’, the Scythians used large numbers of archers in battle and became renowned because they would shower hundreds of deadly arrows within a few minutes on enemy lines.

One Byzantine writer during the 6th century AD described the carnage wrought by their mounted archers: ‘they do not let up at all until they have achieved the complete destruction of their enemies.

Tipping their arrows in poison also gave them an edge.

The Scythians loved horses and developed breeding programs and riding skills to new levels of brilliance.

Their saddles, bridles and bits were durable and light, as were their whips, shields and pouches.

Horses were buried complete with elaborate costumes that were decorative, reflecting their fashions and passions in their adornments. 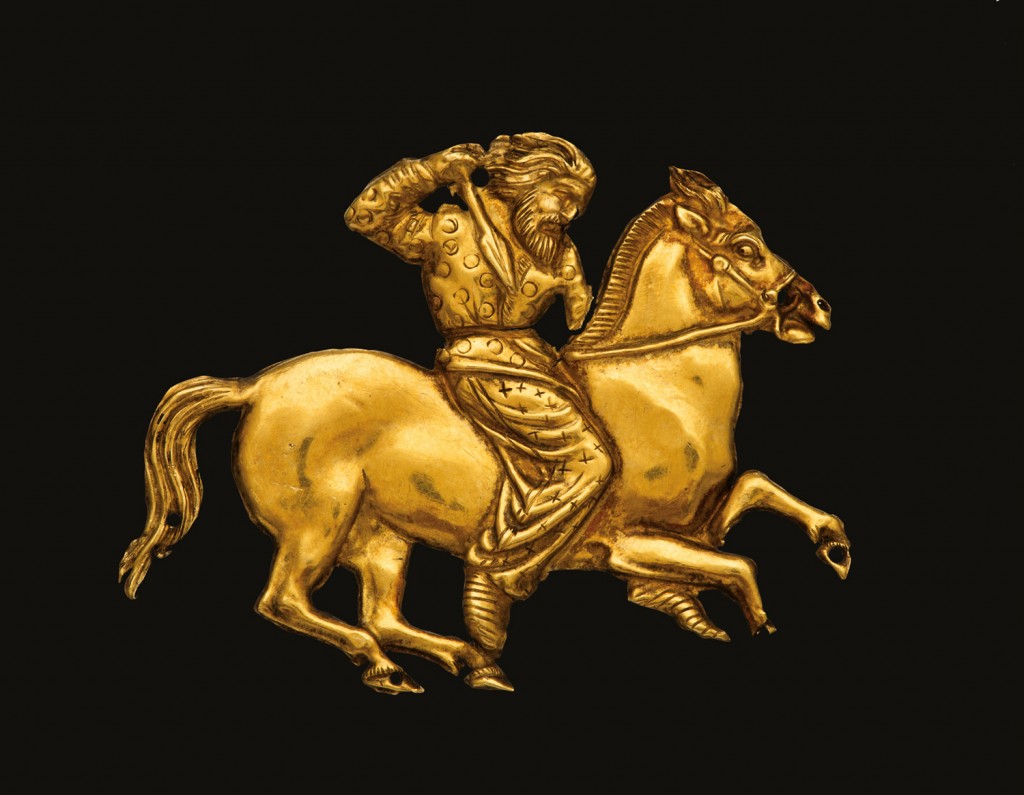 A gold plaque depicting a Scythian rider with a spear in his right hand; Gold; Second half of the fourth century BC; Kul’ Oba. © The State Hermitage Museum, St Petersburg, 2017. Photo: V Terebenin

The Scythian’s horses would transport their riders from the icy tundra up north, to the dense forest in the centre and mixed woodland and grassy steppe of the south, where a wide grassy corridor of rich grazing was accessible to their herds.

How do we assess their contribution when all their possessions needed to be both light and portable as they accommodated climate change? They moved from the plains and mountain meadows in spring and summer to the more sheltered topographical areas of their country in winter, as they did their best not only to survive, but also to live a life valuing and respecting the four seasons.

All the emphasis on scientific evidence is telling us that humanity is going through an accelerated period of climate change at the moment and so this exhibition could not be more timely. Burial mounds in Siberia have gleaned a wealth of wondrous objects, the extremes of cold keeping mummified warriors and horses, clothes and fabrics, food and weapons together with spectacular gold jewellery in hibernation for our world to discover and learn from.