A permanent settlement in Victoria was made in 1834, by Edward Henty at Portland Bay.

Behind the development, prosperity and technological advances of Victoria’s modern day state is a richly diverse story of migrants travelling from many different countries to follow their dreams of a fortunate life that would provide wealth and land ownership.

After the discovery of gold in the 1850’s the number of migrants increased; those that prospered or found employment in the young colony stayed to raise families.

The history of these early settlers, their successes and failures and the lives of their children has been forgotten, swept away by the passage of time and the widely accepted notion that the past is a foreign country, one where visas are not available.

The good news is: visas are available and they are free (no entry fee) to visitors of the Exhibition: Secret Lives, Forgotten Stories: Highlights from Heritage Victoria’s Archaeological Collection, running until October 12th 2014.

It’s on show at  The Ian Potter Museum of Art, Melbourne. A joint project of the University of Melbourne and Heritage Victoria the exhibition provides a remarkable insight into the life, possessions and tools of people who lived and worked in Victoria between the 1840’s through to the 1920’s.

The exhibition notes, sited near the display cases are intriguingly comprehensive, giving location and background to events in 19th century and early 20th century Victoria which relate to the archeological finds on display.

The glass-cased artefacts, most have never been publicly displayed, were carefully selected to reflect the period between the 1840’s through to the 1920’s.

Arranged with an eye to source, colour, shape and purpose, they speak a visual language of by-gone days; the ceramic and earthenware glazes, patina of metals, hues softened by interment in the earth or the waters of the bay, evoke an emotional response in the viewer to the long ago owners and a desire to know more about their daily lives. In the late 1830s the area near the junction of the Yarra and Plenty Rivers (that would become the Melbourne suburb of Heidelberg) was bought by pastoralist James Williamson who built a house, naming it ‘Viewbank’ after a property in Scotland.

By the early 1920s Viewbank homestead had fallen into disrepair. In 1922 it was demolished and many of the building materials were salvaged or sold.

Heritage Victoria conducted three seasons of excavation at Viewbank during the mid to late 1990s.

Studying the contents of the display case filled with items from the Viewbank estate I was fascinated by the minutiae of everyday life.

There were ceramic figurines, childrens toys, a length of gold chain, part of an earring, a small red gem stone in an ornamental metal setting; once whole, now broken, I wanted to know more: were they deliberately discarded or accidentally mislaid, then forgotten by the Martin family?

Difficult to tell, but interesting to muse on. Another Viewbank exhibit of great interest is a coin from the reign of William III of England, dated 1697 – quite an amazing find; how it came to Viewbank, a mystery that may never be revealed.

The archaeological investigations at Cohen Place (Melbourne’s China town) in 1999 revealed multiple phases of building and occupation at the site from the 1840s through to the 1920s.

Irish, English, European and Chinese migrant families lived in the cottages at different times from the 1840s to the 1900s. Despite the area being inhabited by criminals and prostitutes for the most part, occupants were hard-working and reasonably well-off.

Between the siltstone footings of a cottage built in the 1850s British artefacts; blue and white ceramics, coins, marbles and toys were found.

Some of these are displayed along with items from a cache of sewing requisites: pins, buttons, bone needles, awls, thimbles and lace making bobbins. Tools I would have liked to touch, the better to picture the women whose hard work clothed their families.

In the 1890s Chinese families occupied the cottages and a selection from the artefacts found, which included coins, tableware, incense burners, medicine bottles and opium pipes, are displayed.

I particularly liked a small bronze coloured metal badge or brooch, fashioned in the shape of Australia – an early souvenir, perhaps, purchased to be sent back to family in China. Who knows? Fascinating to know the story. If I had to select a favourite from the exhibits on display then I guess it would be the ceramic wash basin recovered from the wreck of the SS Launceston which sank in Port Phillip Bay after colliding with the with the bow of the SS Penola.

The basin, decorated with a blue and white transfer pattern depicts a scene ‘Fishing in India’, the gentle glow from its glazed surface reflects long ago passengers who perhaps, used it to freshen up after a turn around the deck or before dining with the Captain – an exhibit to muse on and remember.

Thankfully, the 24 crew and 38 passengers were safely transferred to the Penola, with no loss of life. The wreck, rediscovered by Geelong diver Terry Arnott in March 1980 was remarkable for its intactness and for the number and quality of artefacts recovered. Of these, ceramic plates and bowls marked with the red and white Launceston and Melbourne Steam Navigation Company logo (almost mint condition), chamber pots attractively decorated with blue and white patterning are displayed along with the near perfect ceramic wash basin.

I have barely touched on all there is to see and learn from in this important well researched exhibition. Don’t miss the copper alloy whaling skimmer, recovered from the wreck of the SS Cheviot (degraded by sea water it’s a piece of history that could be modern sculpture), the really large stoneware jars from the Bendigo Chinese Kiln area, Pentridge Prison burial boxes (Ned Kelly was buried there), gruesome but poignant in the tragic realization of their use, the pistol found at the Eureka Historic Precinct and lots, lots more.

During the course of his busy day, co-curator, Dr. Andrew Jamieson, found time to answer questions on the story behind the exhibition and to give an insight into future events:

Q1. What motivated you to stage the exhibition and how long between conception and planning to installation and public viewing?

Before I started work as the Classics and Archaeology Curator at the University of Melbourne (in 2005) I was acting manager of Heritage Victoria’s Conservation Centre.  During the time with Heritage Victoria I became aware of the objects in the different historical archaeological collections. 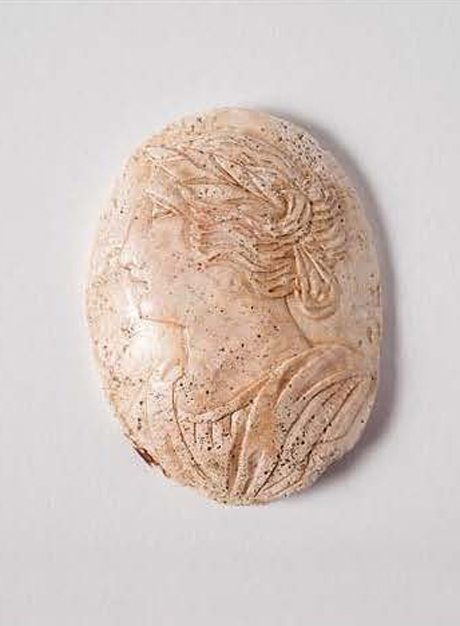 So you could say that the Secret Lives, Forgotten Stories exhibition has taken ten years to develop, plan and install.  In fact, this exhibition would not be possible anywhere else in Australia.

No other state has an archaeological collection consolidated in one single repository like we have in Victoria.  This is a testament of the strength of the Victorian Heritage Act and of Heritage Victoria’s commitment to managing and preserving the States archaeological heritage.  Since the implementation of the Heritage Act in the mid-1990s there have been more than 900 archaeological excavations conducted in this State.

Heritage Victoria manages the collections unearthed from many of these projects. Having the States collection managed in one place enables research, and other public programs and community engagement such as this exhibition.  What you see in the exhibition is only a small, but carefully selected, portion of Heritage Victoria’s collection.

Q2.  Is there a particular piece/s in the exhibition which illustrates the importance that archaeological excavations play in preserving our heritage for future generations? The objects selected for display in the Secret Lives, Forgotten Stories exhibition demonstrate the relevance and importance of the State’s archaeology. It is possible to trace the history of Victoria’s settlement and growth through the lens of its archaeological record.

The artefacts represented in the show are significant because they have been unearthed as part of controlled scientific excavations that provides them with secure and well-defined contexts.

The eight sites have also been chosen because they are places where the archaeology provides us with information that we could not have obtained by other means, such as traditional historical sources. For example, we know that there were large numbers of Chinese miners working in the goldfields, and we know that there were plenty of women living in early Melbourne, but their voices are largely silent in the historic record.

But archaeology can give another perspective, that is very tangible, that gives rare insights into these secret lives and forgotten stories.

All the artefacts are of interest, but my favourite works on display are the four items from the Eureka historic precinct: the pepperbox pistol, wooden bucket, gin bottle and opium pipe.

These items were recovered from a dis-used mine shaft, they were probably discarded by the diggers around the 1850s–60s, and they are a very evocative of life on the Victorian goldfields. It’s even possible that the pistol may have been used during the Eureka Rebellion itself – it certainly dates to that period. 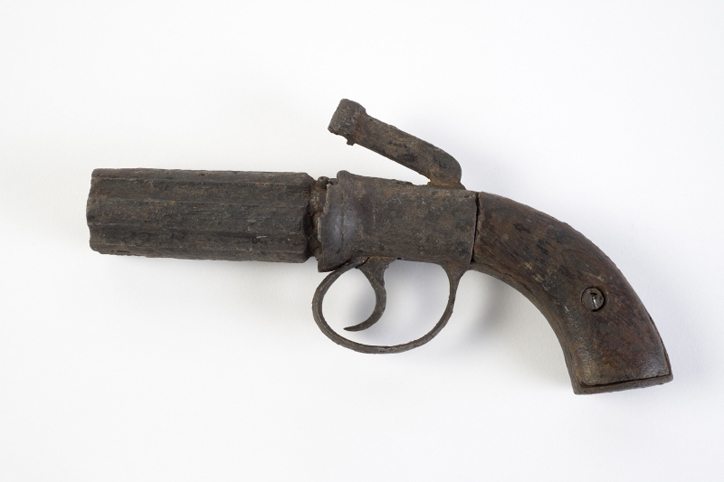 I’m currently developing a number of new installations for the Potter.

The next exhibition in the Classics and Archaeology Gallery (opening in October 2014) will feature selected antiquities from some of our named collections.  The Ian Potter Museum of Art is the custodian of a significant collection of ancient objects.  Many of these works form part of named collections, which are either on permanent loan or have been donated to the University of Melbourne’s Classics and Archaeology Collection.

Another show we hope to present in 2015 will feature selected artefacts recovered from the Joint Historical Archaeological Survey (JHAS) of the Gallipoli battlefield and related historical material.  The exhibition is called Battlefield Gallipoli: Landscape of War and Memory.  Other shows that are in development for the Classics and Archaeology Gallery include: Under the Maltese sun, Come tell me how you live … and Ex Libris: Classica Archaeologica. 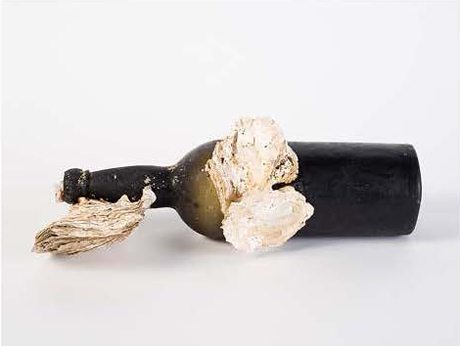 A big vote of thanks to curators, Dr Andrew Jamieson, Jeremy Smith, The Ian Potter Museum of Art, University of Melbourne and Heritage Victoria for the Secret Lives, Forgotten Stories Exhibition.

It brings to life the story of Victoria’s nineteenth century settlement and evolution by highlighting and displaying the discoveries of archaeologists and the contributions they have made to our understanding of Victoria’s past and the vital role they play in the preservation of artefacts for future generations.

Understanding the past is the key to unlock a secure safe future – Secret Lives, Forgotten Stories, an exhibition not to be missed, provides the key with a feast of exhibits and detailed information about Victoria’s past. 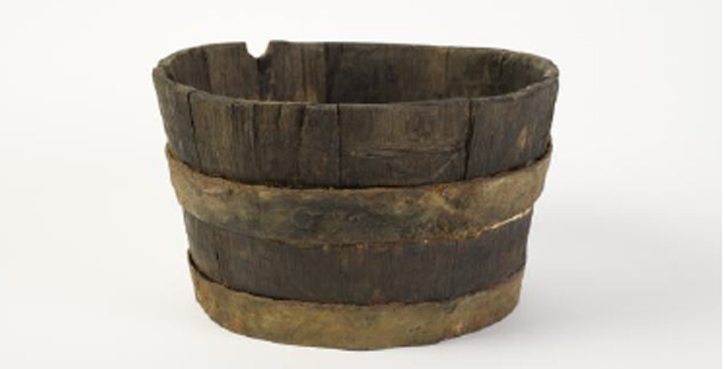 The Ian Potter Museum of Art, easy to visit, forget the car, take the train to Melbourne Central and hop on a Swanston St. tram, alight at Faraday Street, (next to the Melbourne University, it’s a short walk). After the exhibition, visit the on-site café for coffee and a snack.

Jo Bayley attended the announcement of Tom Polo as winner of Brett Whiteley Travelling Art Scholarship 2015, enabling him to follow his dream and study overseas