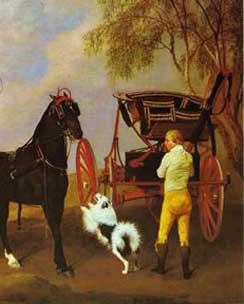 The Georgian era in England began on horseback and ended in a railway carriage. As to the countryside, where the vast majority of England’s nearly six million people lived, it was mainly vast fields, sprawling common waste, wonderful woodland with bogs and moors being very treacherous places. Much of the land under cultivation was tilled as in medieval times. In the north it was mostly barren due to the poverty of the soil, impassability of the mountains and scarcity of the population. The roads were truly vile. Most people lived their whole lives without ever going further than the village market. At London gurus of taste considered the fine arts – painting and sculpture, addressed the pleasures of the imagination individually, collectively and corporately. Country gentry wanted to experience great emotions of taste so the interiors of their country houses were sensibly arranged to suit such a purpose.