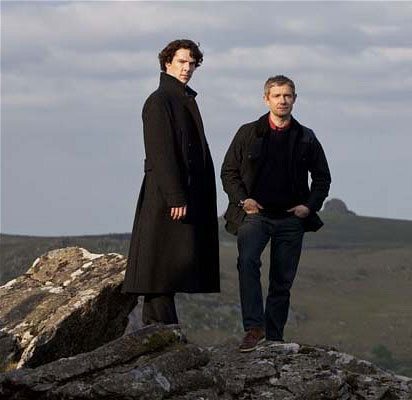 ‘Mr Holmes, they were the footprints of a gigantic hound‘ said Henry Knight (Russell Tovey) to surely TV’s greatest dynamic duo, Sherlock Holmes (Benedict Cumberbatch) and Dr Watson (Martin Freeman). Henry is the man who has literally come to see Holmes about a dog. Following a harrowing relating of a terrible tale Holmes is relieved of his boredom and Watson ejected from his comfy chair at 221B Baker Street, setting the game afoot yet again. 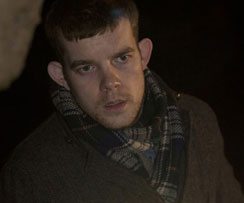 Traumatised by the memory of the dreadful death of his father on the moor when he was nine, a grown up well-provided for Henry is desperate to get out of therapy and to lead a normal life. He does not want to live the rest of it in the fear of what he witnessed as a child as he watched his father torn to pieces by a giant hound with glowing red eyes.

Fear is the operative word in the second episode of the second series of the BBC’s Sherlock, reports our London correspondent. Creative duo Steven Moffat and Mark Gattis contemporary Sherlock is lured out of the city into the countryside simply by the word hound. 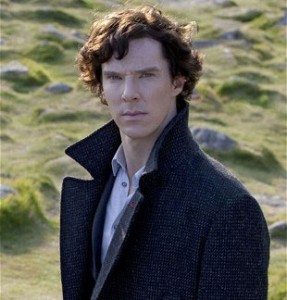 Mark Gattis has conjured up another great contemporary take on one of Conan Doyle’s most famous Sherlock Holmes tales, which he calls The Hounds of Baskerville. In the first of the second series we learned that perhaps Sherlock might have a capacity for love, as he sparred with the lovely Irene Adler. This week he’s dashing about on a bleak, but beautiful Dartmoor. This is a wild geologically rich moorland in South Devon, England where Holmes encounters and experience real ‘fear’ for the first time in his life. Holmes standing on a rock overlooking the moor is a ‘Wuthering Heights’ Heathcliff moment well captured. You are right Watson, a turned up collar on his now famous Belstaff ‘Milford” coat, made of pure Irish wool tweed, does make him look at the essence of ‘cool’. 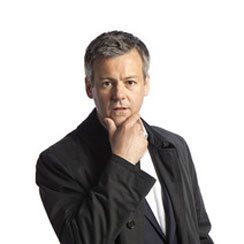 Detective Inspector LeStrade (Rupert Graves) is sent in by Sherlock’s brother Mycroft to keep an eye on the brother he worries about as he’s busy himself, having locked up the evil Moriarty in a government facility. Things are getting a little bit more personal with Scotland Yard’s finest, as we find out his given name is George? Not as romantic as we might have hoped for the adorable LeStrade, but there it is. He is also enjoying the chance to leave London behind for a breathe of fresh country air, although chasing a huge ‘super dog’ capable of killing a grown man was perhaps a little more than he bargained for. Just what is going on in the mist of Dewer’s Hollow, which is below the secret military base of Baskerville?

Protected by a field of land mines, this creepy place just reeks of murder and mystery, keeping all the locals at bay. Visiting the Baskerville chemical and biological weapons research centre Holmes and Watson find out about the horrors of genetic engineering and so a super dog seems more than plausible, even a possibility. Cumberbatch is at his brilliant best in this, his mood swings are quite confronting as he nearly alienates Watson his first and foremost friend with his words and actions. Apologising is not really in his make up but he does, showing us another side to his complex characterisation. Freeman just loves being Watson, you can tell, and he is completely awesome. Henry in the meantime is freaking himself out with memories coming thick and fast. He nearly kills his therapist in a hallucinating session about the hound he believes he has seen. Visiting the local superbly thatched pub Watson does some detecting on his own and soon discovers the ‘innkeepers’ have ordered an inordinate amount of meat, perhaps to feed The Hounds of Baskerville that keep tourists coming, boosting the local economy?

Is the hound real or a figment of the imagination? It certainly has a gut wrenching growl. When Sherlock actually sees it for the first time, the encounter causes all sorts of ramifications for those around him. There is a great deal of action going on with some scary moments that will send the heart a racing. The Sci Fi element is nicely handled and the haunting quality of the horrible hollow on the moors perfectly captured. Dashing through the woods on a dark, only moonlit night with only a few torches, is just the right amount of scary for anyone.

After Holmes has once again brilliantly deduced what is happening and solved the mystery, which we won’t spoil here, the episode ends with Moriarty being let go by Mycroft to participate no doubt in ‘The Reichenbach Fall’, the final in the Sherlock series for 2012.

Untethered Landscapes at the Graydon Gallery, 2 -14th September will highlight artist Kathryn Brimblecombe-Fox’s interest in symbolism and its impact on psyches